Empathising with the gender roles and changing the attitude as an individual person are key to addressing the problem. It is important to measure masculinity through the lens of gender equality.

Gender inequality is so prevalent that it is witnessed even before the birth of a child. As a girl child grows into adolescence and further into adulthood, the disparities only widen. 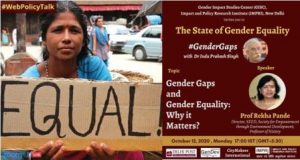 Under conditions of such inequality and discrimination, it becomes impossible to see real empowerment and real progress. Gender equalityis very pertinent today because to see progress and development in all spheres, like poverty alleviation, promoting education and health, advancing gender equality plays a critical role.

“Gender equality is nothing, but a human right. Unless this human right is ensured, we cannot have any socio-economic progress. There will be a stagnation in world progress if half of the world population lives under inequality”, said Prof Rekha Pande. She was speaking at the “State of Gender Equality #Gender Gaps”, organised by Gender Impact Studies Center, Impact and Policy Research Institute (IMPRI), GenDev Center for Research and Innovation, CitiMakers Mission International and the Delhi Post.

Prof Pande asserted that “equality is about ensuring that every individual has an equal opportunity to make the most of their life and talent. It is a belief that no one should have a poor life chance because of the way they are born–where they come from, what they believe in, or whether they have any disability.”

Gender equality recognises the historicity of unequal treatment meted out to people belonging to different groups. There is, therefore, an indispensable need for a gender-sensitive society, for only such a society can bring social change. “Such a society can better understand the multidimensional roles played by women. Gender sensitivity is viewed as a critical instrument in improving our knowledge about a society that at present is derived from a male perspective”, added Prof Pande.

Moreover, “we have created a dichotomy between the private and public worlds. The public world is the external world of labour, military, decision making and protection of livelihood, all associated with men. On the other hand, the private world is an internal world consisting of home, family, domesticity and reproduction. These are associated with women.” Similarly, the distinction between feminine and masculine qualities created by the society has deepened the inequalities. Attributing bold, independent, aggressive and non-emotional qualities to men and the fragile, emotional traits to women is purely the product of “socialisation”, whereby the society through its environment, laws, and customs create such views.

The entire society is divided into the ‘Sex-Gender-System’, which is a term introduced by anthropologist Gayle Rubin.

It refers to the institutionalisation of the system which distributes the resources, property and privileges according to culturally defined gender roles.” It is the biased social constructions like these that impart wrong values into the minds of every citizen.

Gender roles are conceived, taught and enacted in a complex set of relationships within the family and the society. Prof. Pande cited the examples of local Telugu phrases that depict the constructed mindset of the people against the women: “Daughter is like Ghee. Both are good up to a certain point. If not disposed early it will start stinking”, “Raising a daughter is like watering a plant in someone else’s garden” and “If you lie you will get a daughter”. All of these reveal the ways in which female children are perceived and the way the sexuality of women is abused.

Prof. Pande discussed the commodification of women through the media. This act of commodification and the growth of the beauty cult reiterate that the struggle of the women is against wrong constructions. She deliberated on the development of the Gender Gap Index (GGI) which was developed by the World Economic Forum in 2006. The GGI captures the magnitude of gender-based disparities as a means to measure their progress over time. It benchmarked the gap based on four criteria: economic, education, health and political. In 2020, India ranked 112 out of 153 countries. It must come as a surprise that women in India are withdrawing from the economic sphere. The engagement of women and men in the labour market are 25 per cent and 82 per cent, respectively.

The prevalent gender inequality is imminent from the sex ratio, which is reveals a worsening trend. The gender-related violence and sexual harassment are other fronts to witness the gender crisis that prevails. Prof Pande remarked that “the many kinds of violence against women and girls can be understood as gender-based violence. They lead to physical and psychological harm. Gender-based violence cuts across income, class, religion and culture and the main reason is unequal power relationships. This is mainly because Asian culture defines masculinity at the expense of women”.

Rapes during partition exemplify that abusing women was believed to be a means to humiliate and taunt men for their inability to protect their possessions.

Also Read : Out of Sight, Out of Mind: Transgender Community and COVID-19

Violence has economic, political, legal, medical and social costs. Women’s empowerment is limited by violence. To achieve gender equality, men have to play an important role and the roles of the women must be expanded beyond their current limits. Most importantly, the question ‘who is to be blamed’ must be rephrased as ‘what must be blamed?’ This is because, patriarchy, capitalist modes of production, division of society into social and economic groups, class, caste and religion, and the institutional construction of gender foster gender inequality.

Empathising with the gender roles and changing the attitude as an individual person are key to addressing the problem. It is important to measure masculinity through the lens of gender equality. It is through creating a level playing field for everyone that progress will flourish.