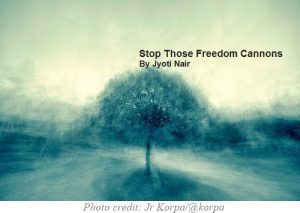 That guilt reeking dusk he gulps, with some smouldering sighs

He (the sculptor) cherished her nudgy prayers for a few morsels

She, a mute urchin, mutilated again, by those heinous fingers

Stifled he sat, on a whale-bone bed, urchin’s mother’s wails, his noose…

In a quiver tempestuous, he hauls the Psalm book, shuns the sly pen

Tonight, his language, neither Hebrew norAramaic

Chosen ink is justice, its syntax coined embracingly for all

Look beyond each other’s eyes, don’t you see oceans of avarice

Trees, robin-nests, earthworms, you strangulated, their hearts and havens

Ploughed their tomb souls to erect your towering concrete prides

Supreme warriors, you are not, or else you wouldn’t have butchered your brethrens!

Your vases still opting for white lilies, meagre morals, you are!

Relinquished to the bone, I leave you with this phrase

Step back, loosen your clenched fists

And hold atleast one palm- friend or foe irrespective

One tolerant step, one peaceful word, and one luminous mind…

Most graceful revolutions have commenced through mindful oneness

Also, when they released those doves, and their vain valour, along.

Jyoti Nair is a seasoned Learning and Development Professional. She currently works for a top-notch Indian MNC as Capability Development Manager in Mumbai. Jyoti is an ardent animal lover, a barefooted stroll on wet grass is a stimulus that helps her to unwind. She believes in living for her soul's calling, she signs in saying, have you ever realised that those shrugged-off life trivia may store the most precious moments from the walks of your life. She can be reached on twitter @noIMEMYSELF