In the words of CHEE Yoke Ling, “Public health system where people know their different roles when something like this COVID-19 happens, the trust of the people, the community of the citizens in the public health response plan”

COVID-19 has exposed the fault lines in the administration of public health system in different nations and their disparate responses towards treatment of the affected. As part of ESG Global Web Talk Series, CHEE Yoke Ling on her insightful webinar on “One Health Approach to build Resilient Public Health Systems in realisation of the Right to Health for All”. CHEE discussed how COVID-19 brought to light how much of the health sector is outsourced to private sector or is privatised. CHEE Yoke Ling, Director, Third World Network (TWN), says that the novel coronavirus might be a ‘truth serum’ in the form of pathological infectious disease in order to address the affliction of our actions. All along its spread across the world, it has revealed the different hidden truth about political institutions, national and international institutions as well as civil societies. 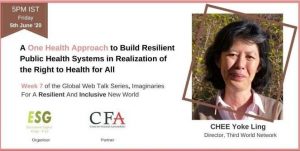 The covetousness of the global world before COVID-19 was focused on globalisation and advanced privatisation, in putting a monetary value to all services and the existence of the lobbying practises found in health sectors, especially in pharmaceutical industry, and private hospital insurance companies indulging in multi trillion-dollar businesses. The UK National Health Service (NHS) shows the intricacies of privatisation. The NHS, which is a publicly funded healthcare system exercised in the UK, has found to have outsourced the entire testing and tracing to Deloitte, which goes and then organised five to six specialised companies. In her talk, CHEE expressed the truth of privatising where the norms of the privatising ideas and notions of the privatisation changes to enforcing the laws and regulations of the particular State to facilitate the precariousness of privatisation and putting a hold on public investment and public health system. Another instance CHEE pointed out was the defectiveness of the privatisation is the most devastated region of Italy’s Lombardy. Since 1997, Lombardy aggressively privatised all its public health system, its efficiency which was quite apparent when during COVID-19, the region which consisted of only 16 per cent of Italy’s population constituted 66 per cent of COVID-19 death. Nevertheless, on other hand, the US’s fee-for-service was criticised as it turns out that many unnecessary tests and examinations were conducted in order to increase the bill.

In order to bring a paradigm shift from unsustainable consumption and production, the Sustainable Conference 1992Ibrought in a global plan of action for sustainable development. It recognised the world with the leadership of the State with active and voluntary involvement of civil society.

The concept of One Health is not new and traces back to around 200 years ago. It seeks to look at the dimensions of human, plant, animal, the bigger environment and ensuring to coordinate multidisciplinary of concerned institution working together and create a better public, animal, and environmental outcome.

The Centre for Diseases Control (CDC) and Prevention defines One Health, “as collaboration, multi-sectoral and trans-disciplinary approach working at the local, regional, national, and global levels—with the goal of achieving optimal health outcomes recognizing the interconnection between people, animals, plants, and their shared environment.”

Interdisciplinary collaboration is the heart of the concept, and though it has been more commonly adopted 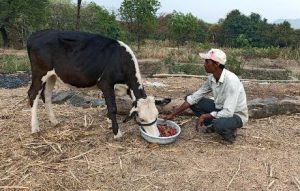 in veterinarian community, it failed to get instilled in the medical community, notwithstanding the support received from WHO, American Medical Association (AMA), Public Health England (PHE). CHEE referred to an arising issue of antimicrobial resistance (AMR) with regard to misuse, overuse and privatising the antibiotic of penicillium. This brought into light the deep disparity and a major unresolved problem inherent in AMR. For instance, Penicillium, which was the most common effective antibiotic, is not available anymore. While, on one hand, there is a misuse, overuse and privatising the antibiotics, on the other hand, those who need it, does not have access to it. This resulted into adopting an ambitious strategy and action plan to tackle antibiotic resistance not just in the health sector, but found more users in the agricultural sector, especially in animal use, industrial factories which involves animal husbandry, livestock breeding, aquaculture, which distressingly not regulated. This unveils a sector where money is invested, and such corporations which are backed by strong political connections can access the penicillium in some countries. The One Health concept precisely focuses on consequences, response and actions at the animal-human-ecosystem environment, especially in the instances of emerging and endemic zoonoses, the latter being answerable for a lot more prominent burden of infection in the developing world, with a significant societal effect in resource-poor set-ups; AMR, as resistance can emerge in people, creatures, or nature, and may spread from one another to the next, and from one nation onto the next. There is an interesting recommendation which was made by UN Interagency Coordination Group 2015, which called for the need of government production facilities for antibiotics in providing resources, research and production of antibiotics and instil hope in the public sector.

A whole team organised under not just CDC, the US, but also WTO, the existence of the whole international network of sharing information, bringing the best in expertise and experience to the countries, and this preparedness for preventing and curbing the infectious diseases is one of the most important aspects of public health response. Starting from the local level, extending to the national level and in the international collaboration promises unified shield under the emergency circumstances. As it is clear, such pathological infectious diseases have less regard for territorial borders and no protection can be availed from the spread once it traverse beyond the communities and borderline. In her talk about resilient public health system, CHEE repeatedly marked the term ‘Preparedness’. The cruciality of preparedness and early intervention surveillance enable the kind of trust from society, the resources, the knowledge as well as the sensitivity in dealing the public health crisis.

Public system had 3 months buffer stock on all equipments, including the basic masks and had the budgets in place in organising the response to the pandemic whereas, private sector were unable to take in as much of the COVID-19 patients.

This stresses on the need for our health system to have a paramount importance in times like this and not just politicians who should be appreciated for implementing the quick response measure, but the actual groundwork carried by the civil servants. In the words of CHEE Yoke Ling, “Public health system where people know their different roles when something like this COVID-19 happens, the trust of the people, the community of the citizens in the public health response plan”. Kerala, Vietnam, Cuba, Malaysia, Thailand (UHC) has been successful in early intervention surveillance, anticipating the infectious disease outbreak and preparedness which is central to dealing with a public health crisis as given example in her talk.

CHEE Yoke Ling stated that everyone across the world from private sectors to elite dependent on medical specialists are lauding the public health system as witnessed in Malaysia, where a sick person, irrespective of whether he is young citizen or not, legal or undocumented migrant worker or not, is given proper treatment in the public hospital and undergone surveillance, contact tracing and other medical tests. The Public Health System has always been there except it was neglected to be hardly given attention by the hasty nations. Moreover, it is crucial to exercise the concept of One Health perspective to address the pandemic of COVID-19 by not only understanding the transmission, but looking for mitigation and prevention mechanisms of transmission that might be useful for future risk of emerging zoonotic diseases. Further to call for strong inter-sectoral collaboration and coordination between animal and human health sectors at local, national and international levels is the foremost necessity in order to prevent, control and eradicate completely the emerging pathological zoonoses. The gist of the pandemic is how quick the response measures were initiated by different countries, how fast their economies can recover as well as overall governance and societal flexibility post-COVID-19, and the preparedness of the whole world working together to establish a unified ‘One Health Approach’ of Public Health Systems.

The writer is a public policy and corporate law researcher pursuing under graduation from Symbiosis Law School, Pune. She is simultaneously pursuing corporate tax and business finance in Leeds Beckett Business School, UK. She can be reached on twitter
@Minnah_Abraham

Life in Lockdown: Voices of Manipur