Blazars are one of the brightest 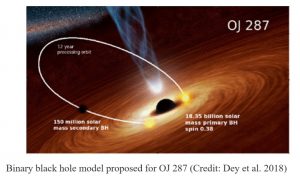 sources in the Universe. A special class of these objects is called BL Lacs. They show rapid and large variability in emission. A Blazer located about 3.5 billion light-years from earth and named OJ 287, whose central supermassive black hole is among the largest known, belongs to this class. An interesting feature of it is that the origin of its optical flare is unique and different from other BL Lacs.

It had been proposed to be a binary black hole system, where one supermassive black hole is orbiting another black hole with an orbital period of almost 12 years. The underlying physical mechanism of optical flaring has remained a puzzle, mainly because of its unpredictability and huge luminosity.

The blazar has become an object of interest all the more in recent times following a flare observed during April-May 2020. It was not predicted under the binary black hole scenario. It seemed that more physical phenomena than what was believed were involved in this source.

A group of scientists from Raman Research Institute, an autonomous institute of the Department of Science & Technology, Govt. of India, along with colleagues from Tezpur University, Center for Theoretical Physics, Poland, and Saha Institute of Nuclear Physics studied the 2nd brightest flare observed in X-ray in April-May 2020 and detected very interesting behaviour of the X-ray spectrum during its flaring and non-flaring states.

They found a significant change in the optical-UV and X-ray spectrum, which leads to a shift in the location of the peak of radiation from highly energetic electrons in the magnetic field or the peak of synchrotron emission towards higher energy. As a result, the blazar OJ 287, which is known to be a BL Lac type object with peak energy flux at low energy, showed a peak at higher energy. This suggested a complex nature of the source of blazar OJ 287.

The study covered the observational data recorded by Astrosat, the first Indian astronomy mission aimed at studying celestial sources in X-ray, optical, and UV spectral bands simultaneously, and publicly available data from other detectors from all over the world like the Swift-XRT/UVOT, NuSTAR. The team has published a report on their findings in “Monthly Notices of the Royal Astronomical Society (MNRAS)”.

Binary black hole systems in blazars are very rare, and their study can establish the theory of galaxy mergers in the early universe, which eventually results in a binary black hole system. Thus, this study, partially supported by the Polish Funding Agency, National Science Centre, can provide a better understanding of blazar OJ 287.