W
ith a unique role in the Asian 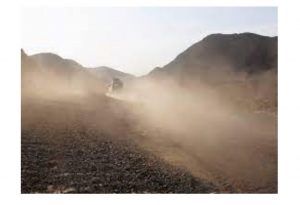 climate, the Himalayan region is considered a vulnerable environment. Several chemical speciation studies have been performed for carbonaceous aerosols and inorganic species over the western and central Himalayan regions during the last decade, reporting the dominance of transported aerosol plumes from the Indo-Gangetic Plains.

However, there is a knowledge gap regarding the primary and secondary organic carbon (POC, SOC) fractions, along with a lack of statistical methods for identifying and quantifying the sources of air pollutants at a receptor location (receptor model) in the central Indian Himalaya.

In order to address this, researchers at the Aryabhatta Research Institute of Observational Sciences (ARIES), Nainital, an autonomous research institute under the Department of Science and Technology (DST), Govt. of India, along with Indian and foreign collaborators, studied the chemical composition and source apportionment of total suspended particulate, which includes all the aerosols and air pollution in the central Himalayan region.
The main source regions for aerosols were found to be the plains in northwest India and Pakistan, polluted cities like Delhi, the Thar Desert, and the Arabian Sea area. It also showed that the main aerosol factors were mineral dust (34%), biomass burning (27%), secondary sulfate (20%), and secondary nitrate (9%). There was a predominance of mineral dust in spring and summer and biomass burning and secondary sulfate in winter.

Further, the study showed that Carbonaceous aerosols – Organic Carbon (OC) and Elemental Carbon (EC) were the maximum in winter due to the intensification of biomass burning over the Indo Gangetic Plains and the Himalayas because of domestic heating and shallower mixing layer.
Apart from researchers from Aryabhatta Research Institute of Observational Sciences, scientists from the National Observatory of Athens, the University of Crete in Greece, Washington University in St. Louis, Finnish Meteorological Institute, Helsinki, The Cyprus Institute at Nicosia, Cyprus, Institute of Environment and Sustainable Development, Banaras Hindu University and Department of Physics at Gorakhpur University participated in the study. They have published a report on their work in science journal, ‘Atmosphere’.

Dr. Umesh Chandra Dumka and Mr. Rahul Sheoran of ARIES, said the findings of the study would help supplement emission inventories and contribute to an effective assessment of climate impacts over the Himalayan region.