Focussing on mental health through the medium of art, biomedical researchers and artists come together to raise awareness about workplace stress. 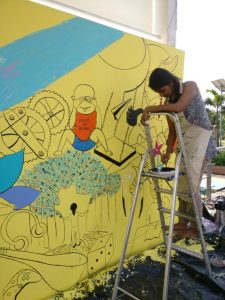 “E mployees don’t want to share it and employers don’t want to talk about it because it is a bag of worms,” Dr. PallabMaulik, Deputy Director, George Institute for Global Health, India, told Delhi Post, referring to mental health issues, especially workplace stress that is prevalent across organisations but hardly spoken about.

He, along with his team and Wellcome Trust/DBT India Alliance (an initiative supported equally by The Wellcome Trust, UK and Department of Biotechnology, India) as well as Arting Health for Impactprogram, recently organised ‘Healthy Mind Street Art’ event at Delhi’s Select City Walk Mall in Saket.

“The idea is to look at how art forms are used to express issues about mental health because art is a very powerful media which can be used to think about and depict emotions, expressions and feelings in a non-stigmatising manner,” Dr. Maulik told Delhi Post, adding that choice of a mall with people from different walks of life was intentional considering that in ancient times, such places were marketplaces of ideas and exchanges.

An artwork by artist Richa Kediaand her team comprising Rohit and Shubhangi, depicted a few common coping mechanisms of dealing with workplace stress. “One of the most important one is meditation and the key doctrine of meditation is to learn to control one’s seven chakras to reach the highest form of self-awareness or nirvana,” saidKedia.

The artwork also depicted emotions such as denial when it came to stress. Articulating the importance of expressing stress, Engineer-turned-artist Kedia apprised Delhi Post that the central theme of the artwork was the fifth chakra or the throat chakra.

Kediatold Delhi Post, “A blocked throat chakra can impact one’s ability to express,owing to fear of ridicule and judgement. Mostly with regards to mental health, the fifth chakra gets blocked due to the social stigma attached to it. I had done a lot of readings along with my team to understand how best to depict workplace stress. We zeroed in on the way outs that should be highlighted.”The artwork depicted fitness activities like cycling and sports and hobbies like photography, gardening, listening to music and playing instruments etc to beat stress.

“The evening saw researchers from the Institute highlighting the need for mental health awareness and recognising signs and symptoms relating to common mental disorders.” 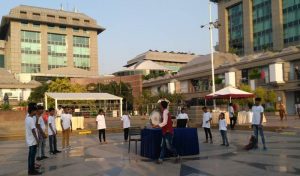 There was an open discussion on workplace stress and stigma related to mental health. A short film from the World Health Organisation (WHO) entitled “I had a black dog, his name was depression” was also screened on the occasion.

Public Engagement officer from Wellcome Trust/DBT India Alliance, Dr. Sarah Iqbal shared with Delhi Post, “In addition to supporting biomedical research in the country, what we are also passionate about is how we can bridge the gap between science and society. And we encourage our fellows to take up projects like these. So when I met community engagement experts in Botswana in South Africa at a meeting in February last year, we wanted to talk about mental health. In Botswana, street art has very different significance. It is always seen as graffiti art, and is associated with vandalism. But that is not the case in India.”

“Conceived jointly by the Welcome Trust/DBT India Alliance with Infers Group (Botswana) and Interfer(South Africa), Arting Health for Impact programis being implemented in India with the George Institute, as a multi-lateral and multinational collaborative project.”

It aims to connect artists, scientists and the general community to explore science and health through street art, providing a creative urban space and an opportunity for all participants to express their ideas.

Dr. Iqbal further emphasised on why street art was chosen as a medium. “We thought why not pick up street art without defining it or lending any meanings to it. People who are passing by it at a central place of a mall will engage with it and it will act as a reminder which might be interpreted in different ways. We just wanted to test the efficacy of using street art as a way to talk about health issues,” Dr. Iqbal, who was once in corporate life, told Delhi Post.

A highlight of the evening was street theatre performances by children from the JamghatTheatre group where child actors tried to depict different types of stress and how they could be managed.