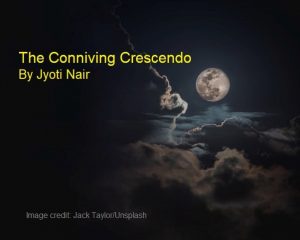 That day, the air was combustible

The sunrays had been slitting

The earth as recently whetted sickles

Thor’s inflamed hammer, growling all along the way

Though the conciliating ambience in Morpheus’s veranda

Served as Sorbet, hammer thus sat pacified in a corner.

The bone of contention was ‘declining benevolence of mankind’

A random post-siesta talk, prodded by Morpheus around last equinox.

About the same topic, through last night’s choking dream vales.

Thriving on vengeance and avarice.

Startled by the hammer shrieks.

Amid the tempestuous ambience

She descends on the gravel landscaped terrain

Her tresses frantically brooming over many shops and buildings, that berserk noon

Perhaps, those towns did experience some mild tremors in those minutes?

Some limpid tears fell from her eyes, undismayed.

They nonchalantly succumbed to the contaminated earthly atoms

Verily, that’s when apocalypse woke up from her swaddled-slumber, after aeons

Plausibly, when she glanced at our greed dribbling cosmos

The infinitesimal virus, the conniving crescendo

Who has already begun to read our judgement days.

Jyoti Nair is a seasoned Learning and Development Professional. She currently works for a top-notch Indian MNC as Capability Development Manager in Mumbai. Jyoti is an ardent animal lover, a barefooted stroll on wet grass is a stimulus that helps her to unwind. She believes in living for her soul's calling, she signs in saying, have you ever realised that those shrugged-off life trivia may store the most precious moments from the walks of your life. She can be reached on twitter@noIMEMYSELF

May the Real Congress Stand Up