May the Real Congress Stand Up 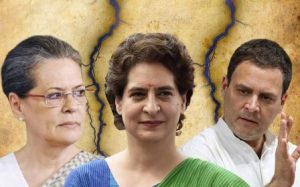 time. The 2021 Assembly Elections saw Indian National Congress drawing a blank for the first time in West Bengal. Congress lost in Assam and Kerala as well. Is Congress, the political party, finished?

Firstly, we need to recognize that there are congresses outside the Congress. Mamata’s Congress is in power in West Bengal, Pawar’s in Maharashtra, Jagan YSR’s in Andhra Pradesh, and KCR’s TRS in Telangana. Each of these leaders, after leaving Congress, have their own congresses today and fights non-Congress opposition in their state. The mainstream Congress has almost been reduced to debris in these states. Even in Maharashtra, the main Congress is fast disappearing. These four states together send 131 MPs to Lok Sabha.

Secondly, there are congresses within the Congress. Of them, Gehlot’s in Rajasthan, Amarinder’s in Punjab, and Baghel’s in Chattisgarh have their own demesne in these states while still being part of the Congress. They have won elections on their strength, often despite the main Congress, and are in power. Further, there is Kamal Nath’s Congress in Madhya Pradesh, which is also a formidable one and would have continued in power but for the coup by the leader then actively, but unsuccessfully, groomed by the main Congress. Similarly, Hooda’s Congress in Haryana has still not disintegrated despite losing two successive elections. These five leaders have significant say in 88 MPs that these states send to Lok Sabha.

Thirdly, there are states with multiple congresses within the Congress. In Karnataka and Kerala, the presence of a multitude of leaders in Congress means two things: one, they do not know who is their real rival- the rivals within the party or rivals in other dominant parties; and two, therefore, they spend most of their energy in competing to be in the good books of the main Congress, who wields power in the selection of state leaders through an undemocratic system prevalent in the Party. Yet, a person like Siddharamaiah continues to have mass appeal. These two states send 48 MPs to Lok Sabha. These three categories of congresses, among them, compete for 267 Lok Sabha seats. They are mass leaders and they have presence in the grassroots. They do have cadres. What is common about these congresses? One, they can align with the idea of power to be resided regionally, rather than with the so-called Delhi Darbar. They derive power from the local politics and people. Two, they can fight the dominance of the first family of the Congress and its coterie. And three, they are sought after by the adherers of the original stream of Nehruvian ideology of secularism and are the torch-bearers of the post-independent Nehruvian Congress that aligned with Ambedkar to evolve a secular democracy in the country.

Beyond these three categories, there is the fourth one. These are states where there are Election congresses, that is, Congresses have presence only during the time of elections.

For example, in Tamil Nadu, Uttar Pradesh, Jharkhand, and Bihar, the Congress, as loyal appendages to one of the dominant political parties of that state, manage to negotiate seats for themselves during elections. The rest of the time, others hear only their snores. In these states, the dominant parties of the alliance are more sought after even by the erstwhile Congress supporters now, for these political parties have become the symbol of secular polity. These three states together send 173 members to Lok Sabha. Finally, there are states with leaderless Congresses. The Congresses in the states of Gujarat, Assam, and Uttarakhand, despite being in the main opposition, register their presence through their absence. These are the states where the Party either has lost the dominant leader or has never allowed any one leader to be created at the state level. These 45 Lok Sabha seats-worth states remain the first family’s presidencies.

If one looks closely at the multitudes of Congresses present today, the Trio of the Gandhi family has become a liability. And so is the Group of 23 that is becoming the safety valve for the Trio. These Congressmen, together, neither have a mass base, nor any acumen on contemporary politics; and they do not even represent the ideology of secularism and parliamentary democracy that the Nehruvian Congress used to represent. They are now largely the Election tourists or snorers whose voices and noises do not count anymore. The real Congress is of Mamata’s and Pawar’s, YSR and KCR’s, Gehlot, Baghel and Amarinder’s, and of Kamal Nath, Hooda and Siddharamaiah. These ten congresses require a merger but would they succeed even if they merge? What they would lack is the consistent ideology of social inclusion. Each of them is probably a brahmin by oneself; for them, inclusion is charity, not ideology; secularism is constituency, not value; democratisation is for the rest and not for their own party. Would they allow leadership from dalit, adivasi and women to bloom? Would they fight for social transformation? Would they be intrinsically different from the right-wing? Would they refrain from leaning towards anti-secular policies in their governance? It is going to be a challenge. Nevertheless, these ten leaders today have an opportunity to build a new Congress and facilitate inclusive leadership of those in the margins and create new political grammar in the country. At worst, they would at least be the formidable centrist opposition to the right wing?