The crisis of Marine Pollution: Oceans turning into plastic soup

Plastic menace is considered the biggest environmental challenges of this century. Researches have shown the adverse effects of plastic pollution in marine ecosystem and its presence in marine lives such as fishes, molluscs, turtles. War on plastic pollution has to be the high priority agenda of every government.

According to the United Nations, today humans produce about 300 million tonnes of plastic waste 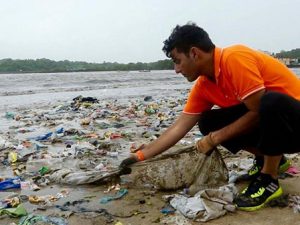 every year which is nearly equivalent to the weight of the entire human population. The UN’s sixth Global Environment Outlook (2019) brings various policy makers and world leaders to take an immediate action on the emerging climate change issues for achieving Sustainable Development Goals and other internationally agreed environment goals. One such major threatening issue is the growing ‘plastic pollution’ which is adversely affecting our wildlife, plantation, marine life, quality of air and humans.

What makes plastic so attractive to humans?

For more than 50 years, global production and consumption of plastics have continued to rise. Plastic is durable, lightweight, versatile and relatively inexpensive, resulting in over-consumption of plastic goods globally. However, plastic has a lot of staying power, as it is very slow to degrade and ultimately become waste.

A simple walk on any beach will show more plastic waste than any other thing there. Recently, Mumbai witnessed nearly 430 tonnes of massive garbage dump– mostly plastic waste washed ashore on Juhu beach, exposing and confirming the fact that our seas and oceans are turning into massive plastic dumps. Ironically, India was the global host of World Environment Day 2018 and the theme was Beat Plastic Pollution.With the garbage mainly comprising of plastic waste, the sea is continuously reminding the citizens of their promise to save the water bodies from turning into bowls of plastic soup.

Researchers estimate that more than 8.3 billion tonnes of plastic have been produced since the early 1950s. About 60 per cent of the plastic has ended up in either a landfill or the natural environment.

What is worrying us?

Out of the plastic production and consumption, humans have shifted away from the production of durable plastic towards single-use plastic like plastic bottles, plastic straws, packets for chips, sweet wrappers, cotton buds, cigarette butts, food containers, and so on. It is believed that single-use plastic items represent 50 per cent of the marine litter. Recently, 40 kg plastic waste was found in a dead whale’s body in the Philippines, sending a warning signal for the need to urgently protect our oceans from further deterioration. If the current trend continues, we will have more plastic waste than fishes in the oceans by the year 2050 according to a study.

Also Read : Revitalising Yamuna In Delhi Connecting With The People Who Matter

One of the most challenging issues with plastic waste being dumped in the seas and oceans is the creation of ‘Microplastic’, derived from the continuous breakdown of larger plastic debris. They are less than 5mm in length and when consumed by livestock, make their way to the food chain. The catastrophic effects of plastic pollution on marine life have alarmed environmentalists and researchers worldwide.

What is Government’s response to it? 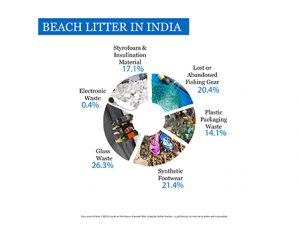 Globally, at the 2019 United Nations Environment Assembly (UNEA), India stated its resolution on phasing out single-use plastic by 2022, a deadline which was later updated to 2025 and banned the import of plastic waste into the country. In the year 2017, G-20 countries came together to tackle the problem of marine litter on various fronts. A voluntary platform was launched to address marine pollution. The G-20 also announced new initiatives to be implemented to meet the 2030 Agenda for Sustainable Development which includes tackling with marine litter effectively.

At the national level, to tackle marine pollution which is mostly plastic waste across India’s 7516 kms coastline, the Union Ministry of Earth Sciences has come up with framing the National Marine Litter Policy. Government will begin to work on its action plan to check plastic waste flowing into oceans. The policy is in pace with the UN Environment goal, “Clean Seas Campaign” which India joined on the World Environment Day 2018.

In a recent statement given by Madhavan Rajeevan, Secretary, Ministry of Earth Sciences, he focuses upon the emerging issue of marine litter and how India has joined the Clean Seas Campaign under United Nations Environment Program to understand the same. The Indian National Centre for Ocean Information Services and a Chennai-based institute would work on this. The focus of this policy is to prevent plastic from entering the oceans in the first place.

Despite a plethora of policies, conventions or programmes, the solution to marine pollution and water bodies’ pollution remains a big issue that can’t be tackled through big policies alone. India needs better laws to curb marine pollution. For instance, according to our laws, no manufacturer or vendor can use plastic bags below 50 microns since thinner bags are non-disposable in nature. But the reality is way too far from what is mentioned in our laws. India must learn from other countries, which not only have laws but have implemented strict rules to work against plastic menace effectively.

For instance, France became the first country in the world to pass a ‘plastic ban’ law in 2016 which includes banning all the daily-usable products made up of plastic. Sweden is known as one of the world’s best recycling nation. They emphasize recycling more than banning it.

India is presently at the verge of a marine pollution crisis.

According to a 2016 report, India produces more than 15,000 tonnes of plastic every day, out of which 6000 tonnes remain uncollected and littered. The quantity is increasing every year.

Small steps daily help in achieving big targets. Citizens of this nation must inculcate habits which will help in reducing plastic pollution like avoid using micro-plastics, replace plastic bags with cloth or jute bags, stop using single-use plastics, stop littering around beaches and stop throwing poly bags in rivers in the name of God. It is believed a lot of plastic enters oceans through the rivers. Every day should be treated like Environment Day!

However, few people in our country are working for a better tomorrow and are getting laurels from around the world. Environmental activist Afroz Shah took the responsibility to clean the Versova beach in Mumbai. His photograph was also tweeted by former United Nations Environment Chief Erik Solheim, who visited Versova beach in 2016 and actively participated in the beach clean-up programme. Today, a band of nearly 200 volunteers work under Afroz Shah.

Similarly, a fisherman named KV Priyesh hailing from Chombala fishing harbour, Kerala was able to remove 13.5 tonnes of plastic from the sea. He soon realised, the problem of plastic waste in the seas is much deeper than expected and it couldn’t be solved single handed. Therefore, he decided to contact Azhiyoor Grama Panchayat and soon, an anti-plastic mission was launched. Before launching the mission, awareness regarding plastic pollution was spread across the masses. People were made to segregate waste materials before disposing it. Today, the panchayat owns a plastic shredding unit and have employed a group named Haritha Karma Sena which collects plastic waste from door to door.

Also Read : Change Is In The Air

These are examples, which demonstrate the power of what one person can do to prevent plastic going into water bodies.
In order to achieve the 2030 sustainable development goals, we first need to work at ground level to achieve the existing SDG 12 and SDG 14. It can only be achieved when our government would ‘act more drastically’ by introducing a complete ban on single-use plastic so that more businesses follow suit. Also, waste management needs to be improved for a proper disposable system of plastics.

Climate change is a real issue which is slowly affecting us all. If the consumers, producers and government will work together to tackle marine pollution, we can not only save our water bodies and marine life but also prevent such big problems in the coming five to ten years. Climate is changing, when will you?

The writer, a public policy researcher, is a Masters Student at School of Law, Governance and Citzenship, Ambedkar University Delhi. She can be reached on twitter @SharmaParni