The Curious Case of the Missing Feeder Systems

Though IPTs have ensured first and last-mile connectivity for long, it is only now that they are being included in the government’s policies on urban transportation.

ith the rapidly changing service industries inculcating innovation and flexibility, a crucial segment that has been sidelined, almost rendered invisible by policy makers has been the feeder services sector, formally called Intermediate Para Transit (IPT). IPTs are modes of transport that cater to the first and last mile connectivity needs of the commuters which are complementary to the public transport system, and at times substitute the public transport in its absence.

Thinking about it, in the 70 years of independence from British rule, India has undoubtedly achieved much in the urban sector with the development of highways and flyovers, metro rails, unirails, etc. But an autorickshaw today still looks almost the same as it did since its inception in 1959. While the automobile sector has thrived in the post reform period with both Indian and foreign players manufacturing cars suited for Indian conditions, why is it that there has not been any innovation on autorickshaws or an alternative for it come up in all these years?

“It is to be noted that the lack of innovation was not because of a lack of demand for autorickshaws or their services, the production of which has only increased with each passing year. They are an integral part of a city or town’s transport system and the most affordable motorised transport for first and last mile connectivity in India.”

The estimated number of autorickshaws plying in Mumbai Metropolitan Region is around 3 lakhs (The Indian Express, September 16, 2015) as of 2015 and about 3.14 lakh autorickshaws operate in Delhi as of 2016 (Business Today, December 30, 2016). In Chennai, the numbers are around 74,026 (The Times of India, June 27, 2016). This gives a clear picture regarding the demand for these services in these cities.

Why is it that this sector is still largely neglected and unorganised, with a lack of accountability and professionalism? The answer can be easily attested to the fact that the country’s transportation policies since independence have never given due regard to the vital role played by IPTs or feeder services in the transportation sector. They were mostly regarded as harbingers of congestion and pollution to the cities and hence were strictly regulated with restrictions on permits, routes as well as fares. This disregard and lack of recognition combined with the excessive regulations on IPTs have only added to their woes by making it difficult for them to earn a decent living, which has resulted in the rising cases of hostility and overcharging by the operators.

The question naturally arises, why were the IPTs sidelined from the policies for so long? Even the National Urban Transport Policy (NUTP) 2006, which called for integration of different modes of transport to curb congestion and overuse of private vehicles chose to ignore feeder services. The answer to this dates back to the Road Transport Corporation Act, 1950, when various state governments took over privately running bus routes as they felt that transport and connectivity is for the public good, and through nationalisation of the bus transport system, the states could plan and deliver long distance road connectivity while also generating profit. This led to various states actively regulating IPTs so that they did not compete with public transport buses. The IPTs were also considered slow and unsafe and were blamed for congesting the narrow Indian roads.

Overtime, as the roads became wider and the incomes increased, more and more people preferred private vehicles for their commute over public buses as public buses were undersupplied and unreliable. This outburst of private vehicles has led to the creation of modern day traffic problems with more and more roads being filled with vehicles every day. A robust IPT network could have opened up an alternative scenario where the transportation needs of the public are met without congesting the roads with private vehicles.

“The arrival of app-based taxi services like Uber and Ola made the various stakeholders, including customers, realise the hard truth about how uncompetitive the IPT sector is, as a result of existing regulations.” 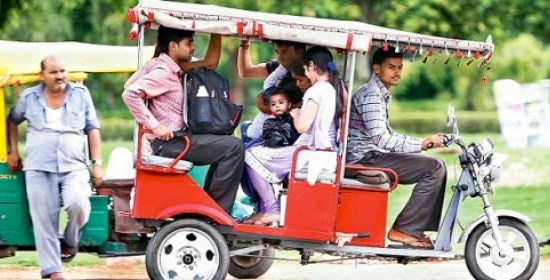 This has, to an extent, made them recognise the potential, possibilities and benefits of bringing in professional management in the IPT sector. Since then, there has been considerable growth in the sector with more firms coming in to absorb autorickshaws and taxis. GPS technology has been a milestone in increasing efficiency, accountability and the presumed safety of IPT modes.

While antiquated laws and governmental ambiguity have led to several new start-ups (such as Redbus, ZipGo, Shuttl, etc) facing the wrath of authorities in sectors such as ridesharing, which is quickly being adopted, the government has realised that amending the law to make space for newer and more efficient technologies is the right way forward.

With urban development policies such as Transit Oriented Development (TOD), the government has finally included IPTs in its vision for urban transportation. If public transport systems form the main arteries of the system, IPTs take the role of capillaries- ensuring that the movement to and from the main channels are smooth with minimum inconvenience. The way the IPTs are developed and utilised has a major impact on the socio-economic life of a city. Therefore, improving on the model and making it more competitive and efficient should be the first step forward.

(This is an introduction to a three-part series on Intermediate Para Transit.)

The writer is a Research Intern at Centre for Public Policy Research, Kerala. This story is part of content collaboration with the CPPR, Kochi