The Dragon Fly vs. Rama the Slayer

What shook the Chinese side was the photo published in the Taiwan News as a photo of the day on 16 June.

Chinese consider the dragon as the blessing from almighty, the power of the universe, their protector, their guide. They derive their wisdom, their power from the inherent nature of the dragon. The Chinese find it very offending if any finger is raised against the dragon or if anyone tries to show it in bad light. 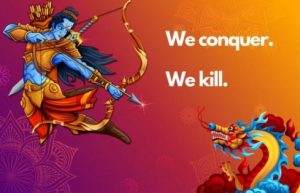 This is the origination of the Rama controversy, which has recently surfaced due to the statement given by the Nepalese Prime Minister KP. Olichallenging the existence of the birthplace of Lord Rama. As simple as it may seem, it has its origin from none other than the Communist Party headquarters in Beijing. Let us track the sequence of events and it will become very clear as to how the seeds are planted for the poison ivy to damage the whole neighbourhood.

Conflict emerged between Indian and Chinese soldiers in Ladakh, where several soldiers lost their lives from both the sides. Statements were issued by the leaders from around the globe, either taking sides or recommending restrain from both the countries. However, what shook the Chinese side was the photo published in the Taiwan News as a photo of the day on 16 June.  Now Chinese are very emotional of their ancient civilization and dragon is seen as an ideal representation of that. The atheist government immediately sprang into action and it wanted to give hard-hitting reply to their fellow Indians. However, they wanted to make sure that the message is conveyed in the same language as the cartoon.

Now it is a well-known fact that if we want to defeat any nation, there is no need for a war.

Just shake the foundation of their rich cultural heritage, their age-old belief, make them doubt the existence of their heroes and we will find them collapsing in no time. Hence, the atheist Communist dived deep into Indian Civilization to check on who Rama was. It was soon discovered that Indians are too emotional about their gods just like Chinese dragon and they need to devise a strategy to spur controversy among them. This will solve two purpose: a)This will be a befitting reply to the cartoon and will show Indians their right place; and b) It will start the age-old controversy and will again bring the mandir issue back to haunt the Indians. 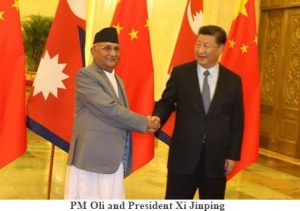 Here came stage two of the strategy; to get their sleeper cells into action. Now China has planted their communist counterparts in each nation. They, in the name of liberty, equality and fraternity, work on behest of their bosses in Beijing to create a furore in any democracy. You oppose China in business, you will have protest within your country. You blame China for the virus, you will have riots in the country in the name of black life. You challenge their dragon, they will challenge your gods.

Hence, now China had to search their best sleeper cell who could answer India in the same language as demanded. It did not take them long to find a small Hindu nation, headed by their atheist comrade sharing the same culture as India. They knew exactly how to nail the Lord.

Immediately their comrade from Nepal was summoned to attack India – both politically and religiously.

Also Read : Migrant Workers From The Gulf Reintegration And Rehabilitation Must

The purpose was very simple, tell the whole world that India is involved in a border dispute with its entire neighbour and constantly harass them. Secondly, Nepal being a Hindu nation owns Rama more than India. Now the thing which needs to be taken into consideration is that PM Oli of Nepal is a Communist, an atheist who has nothing to do with Lord Rama. In fact it is this Communist Party of Nepal, which is responsible for opposing all kinds of Hindu religious activity in their nation. Hence, it is not difficult to track the sequence of events that have followed after the Ladakh clash.

China is like a bully in a school, who makes sure that everyone around him surrenders to his wish and treats him like a big boss. China is the best example of Chanakya’s political theory Sam, Dam, Dand aur Bhed. You need to take control of everyone around you either by making him/her understand, bribing him/her, hitting him/her or create conflict within. However, the above has a little flaw, you can’t do it repeatedly, especially when everyone can see it with the clear vision. That is what happened this time.