The Epidemic Act, at the first instance, fails to provide definition or meaning of ‘dangerous epidemic disease’. WHO classified COVID-19 as ‘pandemic’. Moreover, it is to be relooked as international relations, industrialisation and urbanisation have created space for more diseases to emerge.

COVID-19 is unpredictably creating immeasurable consequences in life and business across the world. Globally, the number of fatality reached to 288,092 as on 12 May 2020. In India the total Coronavirus cases have gone up to 71,441 with 2,310 fatalities as on 12 May 2020. Prime Minister Narendra Modi on March 24 announced a nationwide lockdown for 21 days, and it was extended further till 3 May and again to 17 May subsequently. The Government of India has invoked the Epidemic Diseases Act, 1897 and the Disaster Management Act, 2005 to control, to combat and prevent the COVID-19 pandemic. It has effectively imposed many measures by invoking these Acts during the lockdown to contain the outbreak. Although, the Epidemic Diseases Act was introduced by the British during Bombay plague swelled by rats in 1890s, some argue that it was enacted to put freedom fighters in prison. However, the Indian government in 21st century is right on its part for using it to fight against the deadly virus.

The Act has been invoked in other few circumstances as well. For instance, Gujarat invoked it in 2018 to declare Vadodara as cholera affected. Earlier in 2009, notification was floated under the Act to tackle Influenza A H1N1 [Writ Petition (PIL) No. 33 of 2015, decision on 26.02.2015 by Gujarat High Court] and by the Surat Municipal Corporation, since, the entire area was affected by Pneumonic Plague in 1994. It is interesting to take account of the fact that the law developed in 1890s, when there were as such no technological advancements, is being used in the 21st century to fight COVID-19 pandemic.

The Epidemic Act, at the first instance, fails to provide definition or meaning of ‘dangerous epidemic disease’.

WHO classified COVID-19 as ‘pandemic’. Moreover, it is to be relooked as international relations, industrialisation and urbanisation have created space for more diseases to emerge. The territorial boundaries should be reconsidered, as the area covered under India is different as the one mentioned in the Act. The Act fails to provide for legal framework in case of availability and distribution of necessary vaccine or drugs. It is silent on the moral facet and human rights, which play an important role in 21st century.

Judicial Scrutiny of the Epidemic Act

It needs to clarify how the state governments are supposed to exercise when the provisions of the Act contravene with the existing statutes or Acts. It has been years that the Act was passed and it failed to go through the judicial scrutiny.

The Act gives immense power to state government ignoring central government, which has a greater role during such times. Centre helps as a connecting link between the states, and hence, this notion needs attention. The Calcutta High Court in Ram Lall Mistry v. R T Greener (1904) evaluated the scope of Section 4 of the Act. The issue before the court was if the then Calcutta Corporation Chairman was protected from liability arising out of a demolition of building done under the Plague Regulation to curb the spread of plague. The Court clarified that Regulation 14 of the Plague Regulation imposes such liability and hence, the building owner must be compensated. However, such compensation is not protected under Section 4 of the ‘Act’.

Disobeying of orders call for punishment in consonance with Section 188 of IPC. In petty aspects like annoyance, injury or obstruction, it is punishable for fine up to Rs 200 and imprisonment up to a month. In grave offences like danger to ‘human life’ or ‘safety’, ‘riot’ or ‘affray’, it extends to six months’ imprisonment or fine up to Rs 1000. However, under the section, mens rea is not taken into consideration but mere knowledge. The courts under this cannot take cognizance by just filing FIR. It has to be done by public officer in accordance with Section 195 of CrPC as affirmed in Raj Mangal Ram v. State of Bihar (1993). Whether mens rea has to be considered or not was answered by the court in J Choudhary v. The State (1963), wherein a doctor refused to take vaccine of cholera, and hence, the court said he is liable as intention should not be taken into consideration. 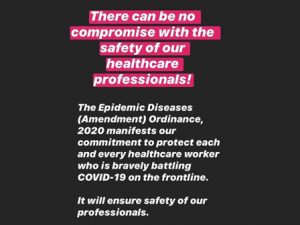 The major criticism of the Act lies on the notion that it is purely regulatory in nature and lacks specific health focus. The legal framework needs to be strengthened for spheres like isolation or quarantine of infected or suspected patients, movement restrictions, prohibition of mass gatherings, closure of educational, sports and other institutions, compulsory vaccination, etc.

During the current COVID-19 pandemic, instead of boosting up the morale of health service providers and healthcare fraternity at this hour, they are being targeted, beaten up and obstructed from performing their duties. This has caused ostracisation, stigmatisation and harassment in many cases. Healthcare is critical during such crisis, and hence, realising the grave situation, an ordinance was promulgated to amend the ‘Act’. This ordinance aims to protect the healthcare service provides, their property and working premises against such violence. Such violent acts have been made cognisable and non-bailable offence. It aims to compensate for the loss to such health service providers. Commission or abetment in acts of violence shall be punished with imprisonment for a term of three months to five years, and with fine ranging from Rs 50,000 to Rs 200,000. In situations, wherein grievous hurt has been caused, there shall be imprisonment of six months to seven years and fine ranging from Rs 100,000 to Rs 500,000. Also, the offender is liable to pay compensation and twice the market price of his/her property to the victim. This was done in order to boost the confidence, morale along with the assurance and trust that the nation believes in them. The commendable hard work of healthcare workers by exposing themselves to such risk should be appreciated and not discouraged.

The 248th report of Law Commission headed by Justice A.P. Shah elucidates the ‘Act’ to be obsolete, and hence to be done away with. The Law Commission also classified different laws in three categories. It created around 49 subjects in which the ‘Act’ was placed under ‘public health’, found in Item 6 of State List under Schedule VII.

The conundrum arises as to which the competent authority to repeal the pre-independence act is falling under the State List.

The dilemma collides at Article 372(1) of Constitution which adumbrates that pre-independence laws should remain in force unless they are repealed or amended by a competent legislature. Under Article 246 read in consonance with Schedule VII, competent legislation, the legislating body has power to make laws on different matters. This was also clarified in Kerala State Electricity Board v. The Indian Aluminum Co. Ltd. (1976).

Correspondingly, Supreme Court in Kanwar Lal v. IInd Additional Distt. Judge, Nainital (1995), wherein it was mooting amendments to the Government Grants Act, 1895 (again a pre- constitutional Central statute) held that the State Government was the competent legislature to amend or repeal the Act, since the focus of the Act was placed under Entry 18 of List II.

Since the colonial legislation has no relevance in contemporary times, government has made enormous efforts, but all in vain. For instance, the government proposed Model Public Health Act, but the states did not adopt the same. The government through Integrated Disease Surveillance Project aimed to uncover the epidemic diseases. However, it was sufficient just for epidemics of shorter time period. Hence, again it tantamount to be ineffective at such times.

The National Health Bill was debated in 2009, which aims to move towards rights-based regime. It declared health as a fundamental right and stated that an individual has right to the highest attainable standard of well-being. It was structured in such a way that it included essential public health services, powers for adequate response and collaboration between states and centre. It emphasised on formation of Health Boards at central and state levels for efficient coordination and implementation. It further provided for monitoring grievances for transparency. Unfortunately, the bill lapsed in the Parliament. Again an attempt was made in 2017 in the form of ‘Public Health Bill’ to detect disaster and epidemics. Hence, there lies a need to strengthen and relook the provisions or statutes for better implementation and governance. The health provisions to cater emergency situations in India are scattered through various legislations, and hence there is a need to bring them under an umbrella legislation for effective implementation and monitoring.

COVID-19 and Climate Anomaly: Turn Up the Heat on Emissions