The Trans-Andean highway provides the best surface access between Buenos Aires, and Santiago, the largest urban area in Chile.

The Andes are the longest mountain range in the world, stretching 4300 miles (7000 kilometers) from near Lake Maracaibo in Venezuela, not far from the isthmus of Panama that 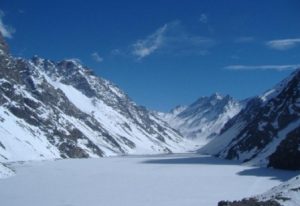 connects South American to North America to Tierra del Fuego, near the Straits of Magellan, less than 700 miles (1100 kilometers) from the Antarctic Peninsula. By comparison, the Andes stretch almost half again the distance of the Rocky Mountains and more than 2.5 times that of the Himalayas.

The Andes, unlike the generally higher Himalayas, have volcanoes — including the tallest in the world, Ojos del Salado, 400 miles (650 miles) north of the pass on the Chilean-Argentine border. This is the second tallest mountain in South America, at 22,600 feet (6900 meters), taller than any mountain in the southern or western hemisphere, except for Aconcagua.

The Paso Internacional Los Libertadores (also called Uspallata Pass) is the most important road crossing of the Andes. The route is one of the world’s great drives. Indeed, the Trans Andean highway has been rated as the most incredible mountain pass in the world. The Trans-Andean highway provides the best surface access between Buenos Aires, Argentina (the second largest urban area in South America, with 16 million residents) and Santiago, the largest urban area in Chile. The route traverses 220 miles (350 kilometers) highway (150 miles or 250 kilometers by air), to Mendoza, Argentina (population 12,00,00), which is the first significant urbanization reached after leaving Santiago, with its 70,00,000 residents.

The trip was taken in both directions, but the photographs for each direction are interspersed from the west to the east, Santiago to Mendoza, with its tree-lined streets.

The entire route from Los Andes to Mendoza is a part of the Pan American Highway, which eventually meets Buenos Aires, crossing Argentina as national route 7. As it reaches the northern suburbs of Buenos Aires, the road reaches 16 lanes, though is only two lanes through the Andes.

The route in Chile is far steeper than the Argentine side. In the last few miles before the ski resort of Portillo, there are 29 switchback curves. The view from the top, at approximately 9300 feet elevation (2850 meters), with the first section of switchbacks is visible down to approximately 8500 feet (2600 meters). This section of the road, with the Portillo ski resort at the top and the highway continuing to wind toward the pass. The lower section of the switchbacks, which end at 7300 feet (2200 meters). The overall change in elevation is 2000 feet, or 600 meters. 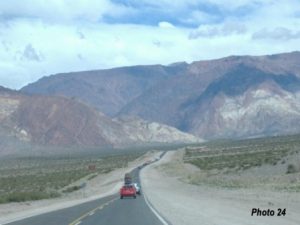 Above the switchbacks, the Portillo Hotel (ski resort), stands in front of a magnificent alpine lake somewhat reminiscent of Lake Louise in Alberta’s Canadian Rockies. Shortly thereafter is the Cristo Redentor tunnel. The tunnel is 10,500 feet elevation (3200 meters) at which the mountain pass is crossed (Paso Internacional Los Libertadores) and the border between Chile and Argentina is crossed. The tunnel is nearly two miles long (3100 meters). The tunnel was completed in the early 1980s. Before that, the route traversed the Andes by a pass reaching 12,000 feet (3900 meters). Even at the lower elevation the highway is often closed by snow.

The actual driving time is about five hours, even with the truck traffic. However, this can be considerably lengthened by formalities at the border crossings.

As would be expected, the scenery is spectacular. The snow-capped, rugged mountains are in view much of the time.

The highlight of the trip is the brief view of Cerro Aconcagua, with its peak reaching 22,800 feet (nearly 7000 meters). This is slightly higher than North America’s highest peak (Denali or McKinley) in Alaska, at 20,300 feet (6200 meters) and more than half higher than the highest peak in the Lower 48, Mount Whitney in California (14,500 feet or 4400 meters) Aconcagua is the second most isolated peak in the world, at 10,500 miles (16,500 kilometers) from the next higher peak, which is the tallest in the world, Mount Everest. Denali is the third most isolated peak, 4,600 miles (7500 kilometers) from Aconcaugua. Aconcagua is approximately 10 miles from the highway (16 kilometers). Regrettably, the top of the peak was obscured by clouds in both directions. There is a small hill just to be west of the border crossing, from which there is a good view of the mountain in clear weather.

During this part of the trip and continuing to Uspallata, the abandoned Trans-Andean railway is in view much of the time, near the border crossing. The railway closed in the early 1980s.

A long “u-shaped” valley comes into view immediately beyond the east exit of Cristo Redentor Tunnel. The Rio Mendoza presents unusual scenery. This modest river (which doubtless becomes a torrent during some parts of the year) has steep, very high banks, which appear to be far larger than could have been created even in a flood. The large banks continue for more than 30 miles.

The town of Uspallata is by far the largest settlement between Los Andes and Mendoza. Argentine route 7 joins north-south route 40, briefly south of Mendoza and heads eastward toward Buenos Aires.