The US – Iran Tussle: Self-Defence or Aggression?

International arena is too competitive and volatile, and the global politics is changing dynamically. The 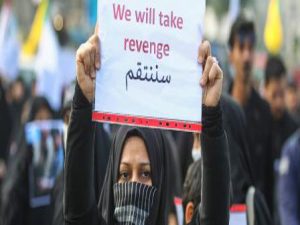 Middle East is one of the most volatile regions of the world. When a global power like the US intervenes, there is a possibility that the conflict between countries might probably escalate into a full-scale war. Hence, it was not shocking when the year 2020 began with a war rhetoric echoing worldwide with an imminent possibility of a World War III.

The US and Iran always have been a difficult duo, but the developments in the US politics further escalated its conflict with Iran. It seemed as if the world is taking a drive while on a reckless trip down memory lane and people drew similarity to the period right before the invasion of Iraq. The world saw similar possibility of escalations between Iran and the US with echoing possibility of war. There was an escalation of tensions between the two countries when Iranian General Qasem Soleimani was killed in a drone strike conducted by the US in Iraq. Iran in its act of ‘revenge’ retaliated by launching a dozen ballistic missiles attacking the US base in Iraq. The international community condemned actions of both states and regarded them as violative of the integrity of the international law.

The US and Iran Relations: From Past to Present

The US and Iran have had experienced rough relations since past. There ongoing animosity cannot be comprehended without looking at their long complicated history of relations. The US did not have any active interests towards Iran till the conclusion of World War II and the beginning of the Cold War. By the 1970s, the US started to meddle into Iranian Politics and faced a conflict with the new policies of the Iranian Government that fuelled their antagonism. After few years of amiable relations, the relationship became acrid with the Revolution of 1979 in Iran that made it from “an island of stability in one of the more troubled areas of the world into one of the leading threats to…international system.”

With the inception of Iraq–Iran War, the region became more unstable which was aggravated by the US support of Iraq during the entire 1980s.

“This conflict cooled off for almost a decade in 1990s when both the countries were occupied in their respective affairs. But things took a drastic turn with the beginning of this century. After 9/11, an agitated United States launched revolutionary movements in the region branding “Iran an ‘axis of evil’ along with Iraq and North Korea”.

Then came the infamous US invasion of Iraq in 2003, which made countries like Iran fear that they might be next. At the same time, the US alleged Iran of harbouring nuclear weapons to bring about global devastation. With the support of a large chunk of global community, the US (both by its presidents, Bush and Obama) imposed sanctions on Iran in order to regulate its conduct. Again things changed dramatically with the election of present President of America, Donald Trump. Trump’s campaign and policy regulations on the Islamic regime have been rhetorically belligerent. Problems escalated more with the failure of Iran nuclear deal, Joint Comprehensive Plan of Action 2015 (JCPOA), which was legislated to keep a check on Iran’s clandestine stock of nuclear weapons. The US pulled out of the ‘Iran Nuclear deal’ and imposed stringent sanctions on Iran and persuaded other countries like India to sever ties with the country. This step brought momentous changes in diplomacy and violence in the region.

On the third day of the new year and the decade, news worldwide were flooded with the headline that a “U.S. military led armed drone strike killed IRGC-QF Commander Major General Qasem Soleimani”. The US Defence Department termed the strike as ‘defensive action’ against Iran’s hostile actions responsible for death of hundreds of Americans in the region in the recent past. The statement also read that there were threats to the “life of American Diplomats and service members in Iraq throughout the region”. Iran after justifying its action in name of full-fledged retaliation launched an “Operation Martyr Soleimani” in the form of a strike by Ballistic Missiles on two Iraqi bases owned by the US. The escalations subsided by Iran’s admission that it mistakenly shot down a Ukrainian passenger aeroplane through its missiles killing all 176 people on board.

The series of events that happened in January 2020 generated heated debates worldwide. No matter what are the excuses veiled in garb of Justifications, the US intervention and vengeance of Iran are both considered to be violative of the principles of the International Law on War and Aggression. In the international law, a lot of regulations and theories by famous jurists like Grotius, Rawls or Augustine have been formulated to prevent wars and aggression, but they are rarely followed. The principle regarding non-use of force in international arena is one of the foundations of contemporary international law. The law follows doctrine of Jus Ad Bellum. According to the Article 2(4) of the UN Charter the states are expected to refrain from use of force against each other. This ban was similarly interpreted by the International Court of Justice in its ruling in the Corfu Channel case, where it was interpreted that the Charter ruled out all forms of a policy based on force. International law generally does not allow use of force, but exceptions are always there. “There is provision of using force for reasons of self-defence or collective security”. Given the nature of the law, which is enforced only when nations give compliance to the laws, it is often disobeyed.

The use of force by countries has not always been self-defence and the Charter of UN has not been followed unequivocally.

The US act of killing a military general of another country on a foreign territory is illegal according to Article 2(4), and an act of Aggression not justified in the ambit of international law. Its implication that the act was on self-defence stands baseless, if we assess it according to the “necessity, immediacy and proportionality” of the situation. There is hardly any evidence supporting the US claims. Besides the US forces did not have consent of Iraq to carry out a strike and which is brazen violation of its sovereignty. This is another violation of international law, which binds state to respect each other’s territorial sovereignty through international treaties. On the other hand, Iran’s response of retaliation is not completely wrong, but also not completely justifiable. However, it cannot be overlooked that Iran’s act of self-defence was more an act of revenge, which is also not completely permissible in the international law. There was again a lack of absolute necessity for unlawful violence. Paradoxically, Iran violated the same principles of international law whose violation it was trying to condemn.

The activities of both the nations need to be scrutinised as their justifications seem to fall flat. The past is full of instances when the US dishonoured principles of international law. The condition now is that the US has “little incentive…to engage with the international legal framework…it presents as a blistering attack on international legal institutions”. Iran has also blatantly disobeyed international standards with its hostilities. States often find it appealing to resort to force and this logic has given rise to unleashing lot of horrors. International community has to be more vigilant in order to prevent escalation of wars, which could trample the global order completely.

The writer, a legal researcher, is undergraduate law student at Rajiv Gandhi National University of Punjab. She can be reached on twitter
@Philomath000