To resist China and CPC, Indo-Pacific countries need to boycott, fortify, and ally

For democratic countries of the Indo-Pacific to safeguard their national sovereignty, they need to boycott trade and commerce with China and reduce dependency on the Chinese origin supply chain.  They must 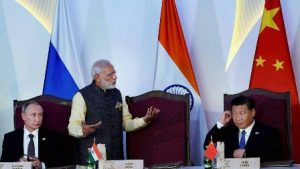 fortify themselves to the greatest possible extent, and form a strategic alliance with like-minded countries within and outside the region to resist possible future aggression of the Middle Kingdom’s Communist Party of China (CPC), which is currently being headed by a Wolf Warrior, who adorns himself the authority to rule for life. He also has an ambition to build a military that can fight and win the battle anywhere in the world by 2049, the centenary year of foundation of People Republic of China (PRC). If the above suggested strategy is not adopted immediately, then it may not be required in the future, as the possibility of the aggressor’s expansion and success look eminent. To adopt this strategy, the region needs a visionary, honest and development oriented democratic leadership.

Since the ascendancy of the Chinese present paramount leader Xi Jinping to the position of absolute authority of CPC, that is General Secretary in 2012, and the supreme commanding position i.e. Chairman of the nation’s Central Military Commission (CMC) and President of PRC in the subsequent year, he has been found very aggressive and restless with his plan to expand Chinese political and economic footprints all over the world through trade and commerce, infrastructure development, building alliance with likeminded leaders, soft  and coercive diplomacies, espionage and technologies stealing, military campaign, etc. He may not have been successful in every attempt (like Galwan Valley on the LAC between India and Tibet and opposition in infra development and political interference in Maldives), but it is to be noted that he is not deterring. This is an instinct largely seen among dictators. He is determined. And back home in China, he has no opposition after having removed all his political opponents from positions of importance in the one party ruled state with this or that ground. While it is often alleged by China watchers that they were fabricated, he has managed to grow a huge national economy and world class infrastructure and military forces (as per many second largest army and air force and largest navy)  with world’s highest, i.e. $3 trillion, foreign exchange reserve and approximately 90 million party cadres to back it up.

After substantial success in spreading Chinese wings in infrastructure fund starved developing and underdeveloped countries, mainly in Asia and in Africa, by way of pushing Belt and Road Initiative (BRI) involving more than $1.2 trillion over several years of times -one of the biggest infrastructure investment initiative ever thought and planned for world-, Xi Jinping, in the last week of 2020, removed the initial stumbling block for Comprehensive Agreement on Investment (CAI).

This was hanging with uncertainty for seven long years (started simultaneously with BRI in 2013), and signed between European Union (EU) and PRC, the world two largest trade and commerce blocs, with his and German Chancellor Angela Merkel personal involvements. Here, it is to be noted that Germany is the largest economy in Europe and the largest trading partner of China from the EU bloc, and in the last half year -from July to December 2020- German Chancellor was the 27 nations EU’s rotating President. If the CAI is approved by EU Parliament and implemented, the dictator ruled China will enter developed countries at the distance Europe for which trade and commerce are primary concern rather than a human right and preservation of international rule of law that China abuses at her convenience and EU countries have been shouting on occasions to safeguard. As per many international relation experts and this author, the signing of CAI despite China’s human right violation and sabre-rattling of weak and small neighbors, apart from the blocking of Covid19 vaccines, double the requirement of its population when majority of the underdeveloped and developing countries struggling to vaccinate their hapless population for want of fund and vaccine, expose developed EU’s duplicity.

EU’s duplicity follows President Joe Biden’s first foreign policy speech to US State Department mandarins in which he said, “There is no longer a bright line between foreign and domestic policy. Every action taken in our conduct abroad, we must take with American working families in mind.” Subsequently, his national Security Advisor, Jake Sullivan, too echoes the same foreign policy outlook. As a result, America’s global observers are all wondering about the so-called talk of ‘Biden brings about America back to global stage.’ Now, it looks like Biden is about to distance his administration from Trump-Pompeo foreign policy which was Indo-Pacific focused to a large extent.

BRI and CAI will help China expand her area of influence on all three contiguous continents: Asia, Africa and Europe.

They have potential to facilitate Xi Jinping’s ambition to expand China’s territory beyond its s present boundary, which includes Mao Zedong occupied Tibet, Xinjiang, Inner Mongolia and Kampuchea. Already, PRC has sounded to almost all of its neighbours, including ally Russia, based on fabricated historical evidences that Chinese sovereign territory lies beyond her present boundary.  In the meanwhile, it has occupied resource rich South China Sea (SCS), ignoring legitimate claims of the sea’s littoral countries despite the voyages of American naval fleet for establishing free passage in international water.

In the Indo-Pacific, the recent past chronological political developments in military-backed civilian ruled Pakistan, communist ruled Cambodia, elected communist ruled Nepal and military ruled Myanmar, clearly tell us that China has already laid her solid footprints in these countries’ national body politics, and -as per many South Asian observers including this author- now PRC is trying to occupy the same ability in Sri Lanka, Bangladesh, Laos, Philippines and New Zealand using latter’s pliable leaderships. After the 1979 border conflict, though Vietnam and China are looking at each other with suspense and latter sabre-rattle former in economic utilization of SCS, yet -since they are ruled by political maxims of communism- it is fool handy to expect communist ruled Vietnam to endorse democratic nations led Quadrilateral Security Dialogue (Quad) as so far leading member of Quad i.e. the US fought long 20 years bloody war with devastating impact with her. And while North Korea is used by China as her hungry barking dog, the world’s most loved but-pariah-democratic-Taiwan is in constant danger of Chinese encroachment despite existence of the US’s Taiwan Protection Law.

In view of the above, it is imperative on the part of Indo-Pacific democratic countries to fasten the strategic institutionalization of Quad and expand the same including likeminded nations such as Indonesia and Malaysia in the region. They put together have the required economical and political capabilities, and when these will be put to build the military strength, taming China won’t be that difficult with or without the US. Already, the world has the experience of NATO’s European partners, who were devastated in the World War II, determination and unity which has tamed equally mighty Joseph Stalin led Union of Soviet Socialist Republic (USSR) in the preceding century.