Would Index of Opposition Unity work against NDA?

Already an existing combination of 17 political parties assures a platform to oppose the BJP at both inside and outside of the parliament. 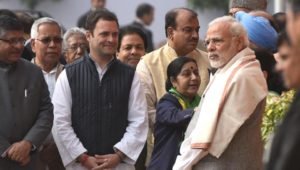 ongress President Rahul Gandhi’s recent statement about the ‘Mahagathbandhan’ against RSS and BJP has now put it loud and clear about the party’s strategy for the upcoming 2019 elections. Ironically, Congress is taking the Index of Opposition Unity road, which was used against them during the mid 1990’s by other national and regional parties, to tame the NDA government.

Index of opposition unity (IOU) was an old term used for unity among the opposition parties to fight against the Grand Old Party – the Congress, later the Indira Congress till during the mid 1990’s. Since 1947 to 1977 the INC (later Indira Congress) was the sole political soul keeper of the country, where it maintained the lead over the other contenders of power. It had witnessed a vertical split in 1969 and Indira Gandhi became the major victor between two warring factions. During the emergency, veteran leader Jayaprakash Narayanan brought all opposition parties and created Janata Party which eventually captured power in the center and attained the name of first non-Congress regime.

In due course of time Janata Party split into various splinter parties. Present party in power, the BJP was a part of the Janata Party, which was known as BJS at that time. The party had a long journey to capture power in 2014 with single largest party status. Now, it is the INC’s term to revise its fortunes against the BJP. In order to achieve this it has to work out the Index of Opposition Unity which facilitates a single combined opposition party candidate against BJP’s candidates in the ensuing 2019 Lok Sabha poll. Barring few states where both the top contenders compete with each other, (roughly 200 odd seats) in all other places it has to ensure the strategy. Already a combination of 17 political parties assures a platform to oppose the BJP at both inside and outside of the parliament. Once again in Karnataka major non-Congress parties displayed their unity during the swearing-in ceremony of Kumaraswamy as the CM of the state.

Index of opposition unity in terms of number is not an issue. What is to be taken into account is reality. Because in East and South, presence of the INC is near negligible. It lost power in Karnataka and in Kerala while BJP is emerging as a strong competitor. In Tamil Nadu, Andhra Pradesh, Telangana, Odisha and West Bengal, it is not a force to reckon with. Similarly North East states are also no more INC hotspots. Consolation for the party is from Rajasthan, Gujarat, Punjab and Haryana, where it enjoys significant influence. But in North and West altogether BJP is still the leading force. Hence, the INC has to believe in Index of opposition unity. As we go through the reality, the IOU in favor of the INC would be seen as below:

“Hence, in total there are 304 seats in 7 states that can be listed under stronger IOU. Performance of the UPA under the INC in those states seems to be very poor excluding in West Bengal. This time Uttar Pradesh and Tamil Nadu may give some gains given the current trend continues for another year. In remaining states the INC has to fight with CPM in Kerala, BJD in Odisha and with AAP in Delhi for better results.”

In contrast CPM and AAP could support the INC in a possible scenario of forming the next government. In other words, NC of J&K, BJD, TDP, TRS, YSR and few NE partners may stick to neutral by maintaining equal distance between the BJP and the INC. Therefore, the mirage of IOU may harm the INC than help it. In terms of numbers neutral parties accounts around 70+ seats which is crucial in eventuality of hung Lok Sabha.

Taking into nature of these state parties which demand more powers to states that the INC may not like to sanction is another factor in the alliance making. Especially combination SP and BSP would prevail until they defeat the BJP in the UP. Besides, the INC has to accommodate more seats to NCP, DMK and TMC in respective states. This is another serious negative factor which hurt the party to reach at least 200 odd seats to claim to form the government.

“Accommodating regional political parties who are mightier than itself, the INC may lose its importance. It has only way to resolve the challenge, that is to win over at straight contest with the BJP wherever it happens, besides, Haryana, HP, Rajasthan, Gujarat, MP, Chhattisgarh, Uttarakhand, Arunachal Pradesh and Assam. Towards achieving the goal it has to ensure higher IOU in the 2019 Lok Sabha poll.”

The BJP in contrast to the INC in fact enjoys being in power. It need not strain much than to declare valid vote catching programs or policy decisions to derail all the hopes of the opposition. It could concentrate on rural masses to tap their loyalty by net them into any social benefit schemes. In all the North and Western states where the BJP swept the elections last are dominated by rural constituencies. Unlike urban voters rural India is fair in thanksgiving. So, the INC has to be more pragmatic in its poll agenda than the ruling party. The INC has to work with its coalition partners to set clarity in resolving various issues that plague the country.

No goodbyes: An account of Afghani refugee settlement in India