The Ganga River, a holy river of India that flows here in its youthful stage, makes numerous landforms.

The state of Uttarakhand has been a center of attending spirituality since time immemorial. It has numerous pilgrimages—the highlands and river valleys, where the pilgrims visit every year. All the pilgrimages are 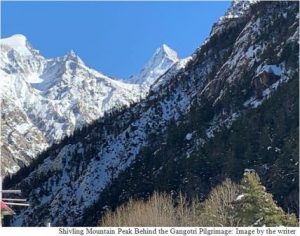 situated on the bank of India’s most important and pious rivers such as the Ganga, the Yamuna, and the Alaknanda. Every highland pilgrimage has its divine path and importance. One of the most important divide paths in Uttarakhand is from Uttarkashi to Gangotri, which goes along the course of the Ganga River with about 100 km distance. Because of having a highly fragile landscape, the entire path is declared as an eco-sensitive zone. The Ganga River, a holy river of India that flows here in its youthful stage, makes numerous landforms.

On January 8, 2021, I started a journey from Dehradun to Uttarkashi and then Gangotri. The first day, I reached Uttarkashi passing through Mussoorie, Dhanaulti, New Tehri, and Chinyalisaur. Uttarkashi town (1150 m) is situated on the bank of the Bhagirathi River and is known as the Kashi of North. Immediately after reaching Uttarkashi, I went to the temple of Baba Vishwanath and participated in the evening Aarti. Thereafter, I went to the Ganga temple and Manikarnika Ghat, the two important cultural places of Uttarkashi. I stayed in Uttarkashi for a night and the next morning about 6:00am, I proceeded to Gangotri. After 5 km from Uttarkashi, a village Gangori (1180 m) is situated, where the Asi Ganga joins the Bhagirathi River. On the way, in Maneri (1323 m), a hydropower project has been constructed. Several rural settlements are situated on the way such as Bhatwadi (1620 m), Gangnani (2089 m), Sukhi (2596 m), Jaspur (2500 m), and Jhala (2444 m). At Bhatwadi, a perennial stream meets the Bhagirathi River and makes the Bhaskar Prayag. The landscape is panoramic throughout the way.

Mukhimath is a winter abode of the Goddess Ganga. A beautiful temple of the Ganga has been constructed where the idol of the Ganga along with Goddess Saraswati lies. During the winter season, when Gangotri town receives heavy downpour, the idol of the Ganga is brought back to Mukhimath village. It is a 20 km distance between Mukhimath and Gangotri and the road goes through Lanka (2627 m) and Bhaironghati (2839 m). In Lanka, the Bhagirathi River flows through a gorge in two places. The River Jahanvi joins the Bhagirathi River at Bhaironghati, makes the biggest gorge, which is 500 m long and 300 m high. From Bhaironghati to Gangotri (3137 m), it is about a 12 km journey. A road bifurcates to Gangotri National Park from Bhaironghati, which is about 25 km. I reached Gangotri at 1 pm. The entire area was snow-clad; the surrounding area of Gangotri town has dense coniferous forests, covered by snow. Close to the Gangotri highland pilgrimage, the mounts of Shivling, Gangotri I, II, and III are situated, which enhance the beauty of the Gangotri town. The Bhagirathi River was frozen because of the minus temperature and heavy snow. A 500 m walk up to the Gangotri temple was slippery. Luckily, it was a sunny day and the entire area was visualized panoramic.

The Gangotri pilgrimage is the summer abode of Goddess Ganga, where hundreds of thousands of pilgrims visit during the pilgrimage season, from the last week of April to the first week of November. From Gangotri, a 17 km trek goes to Gaumukh, the source area of the Ganga River. It is an alpine pasture with no human settlements. After spending half an hour at Gangotri, I came back. On the way, I halted at Jaspur Band for a night. It was a severely cold night. The temperature has reached minus12oC. The next day, I came back to Uttarkashi and then to Dehradun.

During the four days visit to the Gangotri pilgrimage, I felt divine waves blowing in my mind, body, and everywhere. In our religious wisdom/scriptures, it is mentioned that God lives in every atom/particle. The divine path between Uttarkashi to Gangotri proves the fact. The Himalayas is believed to be the abode of Lord Shiva and Goddess Parvati. The Ganga River also symbolizes Goddess and the Hindu called it the “Mother Ganga.” The highly elevated snow-clad mountain peaks of the Himalaya, the spectacular Ganges valley, and the panoramic forest landscape enrich the divinity of this path. It gives peace of mind and inner strength and takes us to self-realization. While visiting this divine path, one forgets all suffering.

(Slider Image by the writer: Gangotri Pilgrimage on the Bank of the Bhagirathi River)