Investing in better and resilient education systems to recover from the crisis, ensuring adequate WASH facilities, and enabling safe learning environments are critical for children’s education in the light of the COVID-19 pandemic.

The COVID-19 virus has spread across 213 countries and territories in the world. The virus, which is notorious for causing respiratory infections ranging from the common cold to more severe diseases and can even lead to death, has adversely affected the lives of the people, 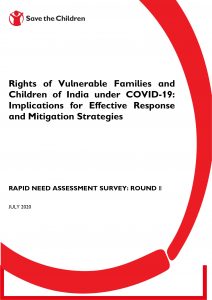 especially children, with the vulnerable families facing the maximum brunt. It exposes children, both boys and girls, to multi-dimensional risks, disrupting their healthcare, protection, education and overall well-being. It also affects their social interaction with friends, peers, family members, teachers and adult caregivers.

The Government of India had taken several stringent measures including complete lockdown, which was absolutely essential considering the COVID containment strategy. However, the government actions also brought forth several challenges including socio-economic, especially for the vulnerable sections of the society, including children. Despite several economic and social welfare measures to address those challenges were undertaken by the governments at central and state levels, challenges continue to stare at vast section of the people, especially the poor and children. The Union Government made announcements of Rs 1.70 lakh crore relief packages under Pradhan Mantri Garib Kalyan Yojana for the poor to help them fight the battle against Corona Virus. Although it was a much-appreciated decision, as the measures were intended at reaching out to the poorest of the poor, with food and money in hands to meet their critical needs, a lot more needs to be done by the Government, NGO sand CSOs at various levels to achieve long-term goals.

In the context of the pandemic, the Save the Children (Bal Raksha Bharat) undertook a Rapid Need Assessment (RNA) to understand the most important challenges at the household level, distress measures for meeting family needs, effects on children’s education, keg concerns with regard to children and other needs of the population. The results of the assessment were to help Save the Children in India develop, review and align its COVID-19 response strategy and programming accordingly in order to respond to and support children with special needs.

The RNA also aimed to provide valuable evidence to influence and support effective measures by the government to mitigate the challenges faced by the vulnerable families, especially children.

Save the Children has undertaken two RNAs till date. While the Round 1 data collection was done during 5—18 April, Round 2 was held during 7—30 June 2020. Sampling technique was purposive in nature. The assessment, longitudinal in design, had households sampled from Save the Children India’s supported project intervention areas in both rural and urban locations across 14 states and two Union Territories (UTs). The Assessment reinforced the need to prioritise and identify the most vulnerable and at-risk children and their families for prevention and response interventions, and provide long-term uninterrupted access to critical services for these families, especially with respect to educational needs.

The assessment focused on capturing information on the below aspects: 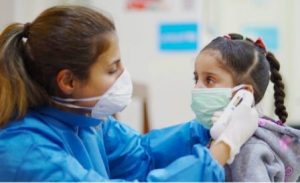 Food insufficiency is a critical cause of concern across households as ‘number of days food ration in a household’ or ‘days of food sufficiency’ indicates that three-fifths of urban households and two-fifths of the rural households were reportedly having ration for less than two weeks.

Some of the key recommendations of the study are as follows: Provision of child-friendly outreach/messages and running child-friendly public information campaigns in collaboration with civil society organisations, to parents, caregivers, teachers and others who work directly with children, for effective prevention and psychosocial support; Ensure equitable access and enhanced social protection and livelihood benefits through under the National Urban Livelihood Mission (NULM) and National Rural Livelihood Mission (NRLM); Strengthening food security; Improving access to essential maternal and childcare services; Ensuring continuation of learning and education support; Investing in better and resilient education systems to recover from the crisis, ensuring adequate WASH facilities, and enabling safe learning environments; and Strengthening child protection mechanisms.

(Photos credit: Save the Children India)