Demographic Dividend: A Boon or a Bane?

Inadequate production and distribution in the era of growing population interferes with the various facets of our life, as the statistics rightly point out. 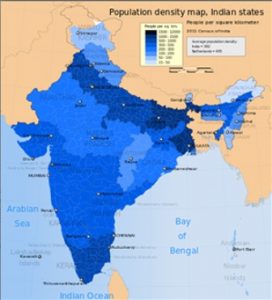 and its implications. Over a long period of time, population explosion has been considered as an impediment to balanced growth. In the post-globalization discourse, the same aspect has been termed a demographic dividend as some economies could produce more than they consume altogether. Although this practice is widely accepted, there are scepticisms about the theory as many economies perform poorly or inadequately even after having a larger population on their hold. For example, India, Nigeria, Indonesia and other thickly populated countries do not perform with their best means. So, what does it denote? Is it the theory that is false or the countries do not try their best?

After the end of the Second World War, colonialism came to an end and dozens of countries were on the course of deciding their destiny. In the background of bi-polar world orders and their respective ideological divide, they cautiously decided their own course of development. In due course of time, many of them even allied with the bloc to pace up their development. Accordingly, they were provided with technical assistance and know-how. Following the collapse of the USSR, the unipolar world dispersed into choice-making between old and new economies. For instance, India had to shed its socialistic pattern of development and embraced free-market economics. Since then, it has achieved double-digit growth at few occasions, striving to become an ambitious $5 trillion (INR 350 lakh crore approx.) economy by 2024. The stimulus factor behind ambition is the population below the age of 30. As against many developed economies expected to have an above 60-aged population in the next one and a half-decade, India projected to become the largest populated country in 2030, pushing China behind as number two. However, China has already achieved $14.2 trillion GDP size currently and are looking out for more expansion in the near future.

There are some voices that argue to follow the Chinese pattern of development than Trump’s economic policies in the US.

The Chinese population is said to be an asset for its faster development. But it had to shrink its population during the last two decades to adjust the growth rate. In contrast, India has introduced Family Planning programmes at large to contain population explosion and managed to neutralize the population growth to around 2 per cent per annum. Still, it has a lot of negativities such as adding pressure on natural resource allocation, social equality, migration and opportunities.

Demographic Dividend: From Bane to Boon?

As we all know that the Indian population is diversified. And at an interval of every 25 years, India’s youth population is under majority and middle-aged population is employed the stimuli for growth has therefore been sustained. Irrespective of the advantage, differences between skilled and unskilled, dependence on agriculture, construction and transport industries along with textiles, communication and public services reduces the chance for augmenting enough labour force for further allocations. Revamping the divisions is not an immediate possibility. Hence, the country has to target future generations. In particular, the teen population who turn up for employment. The Labour Force Participation Rate has been declining for the last few years according to an NSSO survey. In the future, localizing the job opportunities and through an inclusive approach, we have to mobilize the labour force in rural and semi-urban areas.

According to a Bloomberg survey, India needs to add 1 billion populations under the age group of 15–64 in 2027.

Hence, a viable and progressive population policy should be formed to incentivize the fertile youth population to postpone their children for a few years. 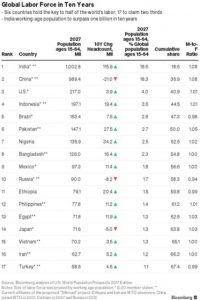 The observation of labour force is expected to happen at retail, banking, financial services, insurance, information technology and a few other domains such as AI, robotics and data analytics according to another human resources survey. The main hindrance in striving for high-skilled manpower is education and training. Our educational syllabus must be designed to suit the need of the competing generation. The ongoing debate on the National Education Policy shows that the primary objective of enhancing technical skills and high-quality research abilities is being questioned based on several wrong notions. Beyond those concerns, the country has to increase the current outlay of 3.8 per cent for the education.

Over the last two decades, not much attention has been paid to improve the quality of human resources. And now it has become a major hindrance for progressing. Therefore, the bane has to be made into a boon. India being a vast and diversified country, micro-level development is highly suitable for faster development. The government has to formulate policies that are suitable to carry forward the development without any disruption. Sector-wise approach for improving employment conditions is the real need of the hour. Several traditional sectors have to be given preference for labour-intensive growth. This will lead to wealth creation and a healthy rural economy, which has more than 60 per cent of the population. Needless to say, the MSME sector is the major contributor to manufacturing and concentrating on their growth would accrue more benefits. Therefore, the bane shall be a boon for the country.

My journey has been more like a walk on a minefield: Rini Ghosh