Rural Dalits Did Not Benefit from Post-Independence Land Reforms

NSSO data reveals that even with land reforms being practiced in post-Independence India, a large number of SC population continues to work as agricultural laborers, depend on the agricultural sector, and do not own land in the ratio of its population.

Professors from various universities came to the forefront on the occasion of Ambedkar Jayanti on Wednesday, April 14, to discuss the impact of land reforms on Dalits and analyze B. R. Ambedkar’s stance on 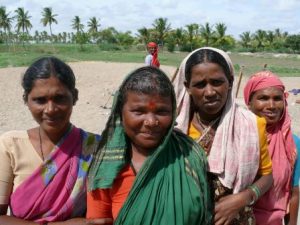 the ways that push for further development of the marginalized Scheduled Castes (SC) and Scheduled Tribes (ST). Organized by the Center for Human Dignity and Development, Impact & Policy Research Institute (IMPRI), the seminar featured professors from the Hyderabad Central University, Jamia Milia Islamia, Punjab University, and the Savitri Bai Phule University, among others. Professor G. Nancharaiah, former Vice-Chancellor of the Babasaheb Bhimrao Ambedkar Central University, Lucknow, and Professor Emeritus, Hyderabad Central University, spoke extensively on the ways that the SC & ST communities have been impacted by the land reforms introduced in the country after Independence. The said land reforms were introduced as part of the first five-year plan under the Jawaharlal Nehru government and aimed to acquire land from zamindars (or land-owning families) and redistribute it amongst the poor.

Commenting on the acquisition, Professor Nancharaiah said, “While the land reforms were able to eradicate the class of zamindars and jagirdars in one way, they were not able to redistribute land equally among the landless.”

He quoted data acquired from the National Sample Survey Office (NSSO) over the last 50 years and stated that even though a large number of SC members continue to work in the agricultural sector, most of them work not as cultivators, but as agricultural laborers on other people’s farms.

About 76% SC population and 90% ST population live in rural area, and both communities depend heavily on agriculture. 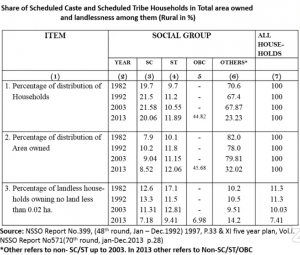 During the 1980s, agricultural growth took place at a rate of 3%. After 1991, in the post-liberalization period, the Dalit community’s share in the land began to decline from 10% to 8%. While the condition of STs is much better, the land they own is often of poor quality and may not be cultivable.

Professor further elaborated on the condition of landless labor households and said that while landlessness had come down, access to land had also decreased. “During this period, we cannot see any improvement as far as access to land is concerned,” he added.

Analysis of NSSO’s data on the distribution of workers through 1971–2011 shows that the SC population’s occupation as agricultural labor has decreased from 52% to 46%. “While there is a decline, it is insignificant, as more than 64% SC population today still depends on agriculture. The ratio of cultivators has also declined to 14%. And currently, only 39% of the SC population is engaged in non-farm activities, while the ratio of that in the forward castes stands at 45%.”

The data presented by the Professor revealed that access to land among SC communities has come down, and the incidence of poverty has also concentrated primarily in agricultural labor households. “While rates of poverty have come down in all populations, among the SC it has declined roughly by 20 points between 1993–2010, but continues to be at over 40% in both rural and urban areas. In the case of other castes, it came down from 31% to 25%,” he added.

Also Read : COVID-19: Central Schemes Failed in Their Promise to Poor and Marginalised

Professor Dhanmanjari Sathe, Emeritus Professor, Savitri Bai Phule University, opined that Dalits need to be pushed into the non-farming sector. “My fieldwork has revealed that a majority of Dalits do not wish to continue in the agricultural sector. For instance, “An NSSO survey in 2005 revealed that 40% of the farmers wanted to shift from the sector. I believe, Dalits should be pushed to work in other sectors. Land ownership, or agriculture, has become a stone around people’s necks. The land is no more a symbol of societal status or respect.”

She further elaborated on a study conducted by her on the grounds of land acquisition by private companies in Pune. “Dalits did not own land there. An analysis of 805 families post the acquisition revealed that they were happy, primarily because they did not want to work on other people’s farms. Most of them got jobs in the hospitality sector in the area, or as I later found out, cleaning the toilets. While it was a menial job, most of them expressed happiness due to a regular salary, a uniformed job, and access to the canteen,” she added.

Quoting Dr B. R. Ambedkar, she said that the answer to agricultural problems in India lies outside the agricultural sector in industrialization.

Dr Pampa Mukherjee also added that the agency of the Dalit community should be realized, and they should not be made to stand at the receiving end of the dialogue. “There is a silent revolution taking place in Punjab and Haryana, especially because of a large Dalit political assertion. In such areas, a large conflict between castes is bound to take place,” she added.

Professor Nancharaiah also commented on the atrocities being done upon Dalits due to land conflicts and stressed the importance of bringing about fair reforms. “Every SC & ST commissioner writes about the killings of SC & ST members over issues of land. Dalits and Adivasis are killed when they try to occupy land granted to them by the government, or when they demand fair wages. In such a condition, it is important to strengthen our reforms and grant them benefits. Measures should be initiated to extract them out of the agricultural sector,” he added.

The Curious Case of Muons