Released close to the International Domestic Workers’ Day, an ILO report has revealed that over 75 million domestic workers continue to work under poor conditions. 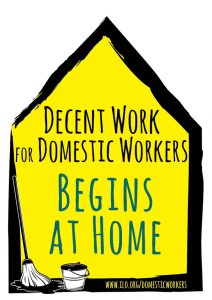 other profession despite a 2011 convention of employment protection, the International Labour Organisation has reported. Released close to the International Domestic Workers’ Day, the report has revealed that over 75 million domestic workers, globally, continue to work in abysmal conditions.

This crisis highlights an urgent need to protect, formalise, and ensure decent domestic work for all who bend their backs on an everyday basis, especially the women who make up a majority of the workforce.

Findings of this report also mirror the data of the Martha Farrell Foundation, which studied the lives of over 2300 domestic workers in the Delhi-NCR region. It recorded their experience during the pandemic, and concluded that a large majority of the women had lost their jobs and faced starvation. A whopping 100 percent of those interviewed stated that they were in immediate need of rations.

The report marks the tenth anniversary of the adoption of the Domestic Workers’ Convention, 2011 (No. 189), and its accompanying Recommendation (No. 201), dedicated to the sector in its entirety, by the ILO. While this adaptation was a recognition that ‘domestic work is work’, and that domestic workers have a right to decent work, it found that there still remain gaps in legal and social coverage of the convention.

“Domestic workers provide services for households around the world, and yet they work in some of the most vulnerable situations. Throughout the COVID-19 pandemic, domestic workers were often on the front line, continuing to supply direct and indirect care services for households despite the risk of contagion. Convention No. 189 sought to extend protections to domestic workers and ensure their access to decent work – it is now more necessary than ever to protect them from the loss of jobs and incomes many of them faced during the pandemic,” the report reads.

According to ILO estimates for 2013, 83 per cent of domestic workers in the region were migrants. In Kuwait, for example, administrative data indicate that 90 per cent of domestic workers are from Bangladesh, India, the Philippines and Sri Lanka. Interestingly, workers from India and Bangladesh tend to be men while those from the Philippines and Sri Lanka, Ethiopia, Madagascar, and Nepal tend to be women

While there haven’t been a lot of changes in the legal aspect of domestic work, its inclusion in the unified minimum wage category in few Indian states (and Pakistan and Vietnam) is a sign of progress. Another legal stride for the country is the inclusion of domestic work in the ambit of the Sexual Harassment of Women at Workplace (Prevention, Prohibition and Redressal) Act of 2013. This can lead to a safer work environment for women domestic workers.

The report also found that over 67 percent of domestic workers did not have maternity cash benefit entitlements. It stated that less than one in five domestic workers, just 18.8 per cent, enjoy social protection coverage related to their employment. Close to 71 percent workers don’t have legal limits on their working time, and 64 percent don’t have legal entitlement to weekly rest. The report also stated that even after 10 years, Philippines is the only Asia-Pacific country to ratify the laws.

However, there has also been some progress since the convention was adopted. It is now ratified by 32 countries, and has helped reduce the number of domestic workers who are excluded from labour laws by 16 percent in the last ten years.

The Martha Ferrel Foundation interviewed 2328 domestic workers in Delhi, Gurgaon, Panipat, Sonepat, and Faridabad (National Capital Region), and analysed the impact of the pandemic over their lives.

It revealed that the pace of recovery from the second wave of the virus, which hit the city between April-June 2021, will be slow for most of the domestic workers. Interviews done by their COVID Relief team found that more than half of the domestic workers they spoke to had lost their jobs, while those employed underwent major salary cuts.

“Eighty-four percent of the workers we spoke to said they are currently unemployed. Many are working at a lower rate than the INR 400 regulated by the Minimum Wages Act,” the organisation said.

Salary discrepancies were also common among the workers, as 1/3rd of the lot didn’t receive their salaries in April. Only 1 percent of the total received their full salaries, and the others were given partial payments.

New Alcohol-Free Sanitizer on the Way