Solutions to the challenges posed by employer-tied visas need to be tackled with multilateral cooperation. An alliance between migrants, civil society, and trade unions should be formed.

The difficulties prompted by employer-tied visas are fairly sufficient to invite a proper dialogue on the issue. An international panel of scholars and practitioners recently 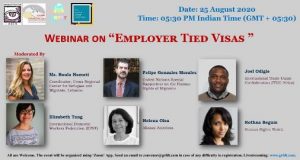 looked into the challenges and alternatives to employer-tied visas at the webinar “Employer Tied Visas”, which was organised by the Global Research Forum on Diaspora and Transnationalism (GRFDT), Migrant Forum Asia (MFA), Cross-Regional Center for Refugees and Migrants (CCRM), and Civil Society Action Committee. While moderating the webinar Roula Hamati, coordinator, CCRM, indicated that there are 272 million migrants globally, of which the two-third (167 million) are migrant workers. As worrying as the absence of particular instruments that discuss employer-tied visas is, there are ILO conventions on the determination of employment as well as forced labour.

Felipe Gonzalez, a UN special rapporteur on the human rights of migrants, claims that employer-tied visas are posing challenges to the labour rights, and economic and social rights of migrant workers. Retention of migrant workers’ passports, limits to the freedom of movement, and lack of access to legal aid or services are among the problems that migrant workers face. Mostly based on the experiences of the US and some Latin American countries, Helen Olea, Associate Director, Programmes, Allianz Americas, identified different challenges associated with employer-tied visa arrangements. In some cases, migrant workers who have filed for a law suit are apprehended and deported to their country of origin. Migrant workers in such arrangements are forced to have the blessings of their employers to move to another work. According to Olea, similar arrangements that involved a violation of migrant workers’ rights were observed among temporary agricultural workers in the US and domestic workers in other parts of the world. Even today, due to the intricacies in such arrangements, migrant workers are threatened to stay in exploitative work environments and remain without health insurance, accommodation, and other important protections.

Olea shared that “employer-tied visas are deficient as they fail to provide immunity or protection to migrant workers who have dissociated themselves from their employers.”

Ellene Sana suggested that “rethinking many issues including the kafala system as well as temporariness is vital to how we decide to entertain the challenges linked to employer tied visas.” Begum’s approach to the issue refrains from making a categorical rejection of employer-tied visas, including the kafala. She stated that the kafala is a longstanding concept in the Arab world. Unique to present-day kafala is that it is bureaucratised and instrumentalised to serve the specific purposes outlined by members of the Gulf Cooperation Council (GCC). Communication and reports by different UN agencies regarded the kafala as a contemporary form of slavery. Rothna Begum, a senior researcher on women’s rights at Human Rights Watch, madea distinction between the kafala system and slavery. Contrary to Begum’s account, Laxman, a secretary-general of South Asian Regional Trade Union Council, identifies the kafala with modern-day slavery.

Prof Binod Khadria, Jawaharlal Nehru University, India, stressed the need for a distinction between a human rights and labour rights approach to the issue of migrant workers’ rights. He explains, “human rights are primarily about migrants’ families, while labour rights are concerned about migrants themselves.” Having characterised Prof Khadria’s distinction as insightful, Olea explained how migrant workers’ rights can also be incorporated in issues of human rights.

Gonzalez shared that even in those states which have partially abolished the kafala system, migrant workers are systematically excluded from labour laws. Consequently, access to the justice system is close to impossible. Employer-tied visa schemes are based on the assumption that the migratory status of migrants is a temporary one. Gonzales associated the lack of vision to integrate migrants into the host society with the above assumption. 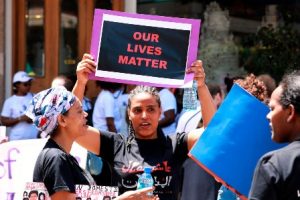 Olea underscores the need to revisit the skilled–unskilled labour distinction provided by economics. She has touched on the issue of discrimination vis-à-vis different categories of migrants, i.e., skilled, low skilled and unskilled. Substantiating the claim made by Olea, Elizabeth Tang, president, International Domestic Worker’s Federation (IDWF), stated that employer-tied visas are not unique to domestic migrant workers. However, the exploitation of migrant workers by their employers has been vastly witnessed in areas involving low-skilled workers.

Speaking about the African experience with the employer-tied visas, Joel Odigie, deputy director, International Trade Union Confederation (ITUC-Africa), sounds unconvinced by the efforts of African states to regulate migration from parts of the continent to the Gulf region. Migrant workers’ path to employment depends on both institutional and non-institutional factors. Not shocked by the agonies of their citizens, most sending states of the continent appear to lack a clear benchmark as well as a blueprint for migration management.

According to Odigie, most sending states of Africa seem to concur with the “take it or leave it” offer of receiving states in the Gulf region.

It is only recently that some efforts have been made by Kenyan and Ugandan authorities to regulate recruitment processes. The implementation of recruitment guidelines approved by global institutions is still not incumbent among all involved.

Alternatives to employer-tied visas call for a collaborative engagement of both countries of origin and destination. According to Olea, since the migratory status of migrant workers is temporary, they should be allowed to take their savings and contributions to their country of origin. Given the way to labour agreements is a long way to go; in the meantime, proper regulation of labour inspection and fair recruitment processes might provide a provisional comfort.

Begum and other panelists suggested the idea of new visa arrangements (for example, a domestic worker visa). However, this arrangement itself isn’t without problems. Although being able to change an employer is the first step in the right direction, some of the challenges in this regard include recruitment fees, health insurance, and accommodation. Tang additionally suggested a look into the best experiences of some Latin American countries and South Africa, where migrant workers are allowed to switch to a different visa arrangement than the one used to enter the destination at first. Showing recent developments, Begum stated that countries like Bahrain and the UAE are considering allowing already existing migrant workers to change employers.

Additionally, solutions to the challenges posed by employer-tied visas need to be tackled with multilateral cooperation. An alliance between migrants, civil society, and trade unions should be formed. Odigie added that networks built for this purpose are the instruments to challenge the defects in employer-tied visas. Alongside the institutional responses to employer-tied visa induced problems, Tang emphasised the role of awareness-raising in enhancing migrant workers’ understanding of the issue.

The writer, a lecturer and researcher at Addis Ababa University (Ethiopia), holds an MA in Migration and Intercultural Relations from the University of Oldenburg (Germany). He can be reached on twitter @Wegen2022