Delivering his address on the ramparts of the Red Fort, New Delhi, on the 73rd Independence Day, PM Modi has called to end single-use of plastics from the country. What are the ways to eradicate the menace? What are the alternatives to replace the material?

There was a world where no plastic existed. India and China were the richest nations in that world. 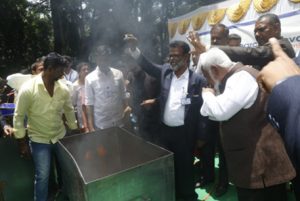 Colonialism changed the scenario and today India and China are working hard to re-establish their hegemony. In such a mission, what they have to do is an irrevocable environmental degradation. Plastic is one big evil to the environment which demands additional cost in cleaning up the remains of it. As the substance once flexible and convenient to utilize has now become detrimental to the very existence of nature. However, there are initiatives to use the wastes out of plastics for road laying and industrial applications, even though the rate of utilization does not decline in correspondence with the rate of manufacture of plastics. Since the highly flexible material has already occupied every place in our lives, it is difficult to eradicate it altogether in a short span of time. Therefore, an overall mission has to be made to eradicate it, which should include both public and private organizations. First, the awareness about the danger of plastic has to be spread across society. Several state governments in India and world bodies are already spreading the message. Several states like Tamil Nadu have banned the use and manufacture of plastics by one hundred percent.

At present, the scenario across the world is that about 300 million tonnes of plastic is being produced and most of them reach to oceans. At this rate of heaping of plastics in the ocean, it would be close to 250 million metric tonnes of plastic remains at oceans in 2050. It is also worrisome that this number is more than the number of fish living in the oceans. Several reports indicate that ocean species and ecology are destroyed by the use of micro plastics.

Hence, what are the alternatives provided by few experts at both the domestic and international arena?

How to Handle Plastic Pollution?

There are initiatives to convert the plastic into a recycled material or destroy it altogether. However, there are unique measures by a few people who would like to turn it into energy as well as a re-usable resource. In this regard, a third standard drop out in Tamil Nadu recently conducted an experiment at IISc in Bangalore. Muthukrishnan, who spent long years with a Siddha saint, found out a herbal combination that turns plastics into a gas without any residual release of harmful gasses and provides ash to be used in cement production. Muthukrishnan, who is being supported by Gopinath, has already registered a company to finalize the patent rights. Talking to Delhi Post he said, ‘I spent a lot of years in researching herbal medicine and one day it struck me that something needs to be done to eradicate this plastic menace. Later, I derived this formula and fortunately got Gopinath’s support to bring it out to the entire world’. He hopes that the support of scientific faculty across India would help him in this research.

Another recent sensation is that a tiny bacteria that converts plastic as C02 and water. Two school students, JeannyYo and Miranda Wang, started and launched their project with a financial aid of $400,000 to roll out the product.

Earlier, there was news that a kind of worm eats plastic as found out by a Spanish developmental Biologist Federica Bertocchini.

With few experiments later, it was found that the enzyme in the worm or the bacteria living in and on their bodies eat the plastic. This worm is a wax worm found in beehives, where they eat wax within them.

Scientists at the University of Portsmouth and US Energy Department’s National Renewable Energy Laboratory, while focussing on a bacterium found in Japan some years ago, mutated them in several ways to zero down on a particular form, which efficiently dissolves PET (bottle used) plastics. In addition, a teenager from Ireland won a grand prize of $50,000 at an annual Google Science Fair. His finding was to eliminate micro plastics from the ocean. His extraction method aims to remove the substances through oil and magnetite, which makes the water clean.

In such ways, the plastics are now being converted or dissolved into an energy resource. However, public awareness of using single-use plastics and other related products, which destroy our ecosystem and our health, should be brought in before just banning the use of them completely.