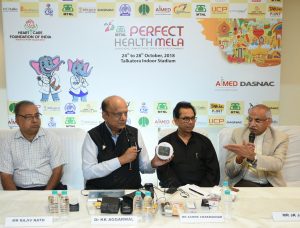 “A ffordable healthcare mission of the Government of India or ‘Ayushman Bharat’ needs indigenous medical devices to be made in India for it to be cost-effective,” said Padma Shri Dr. KK Aggarwal on the scheme which is scheduled to be launched on RSS ideologue Pandit Deen Dayal Upadhyaya’s birth anniversary on September 25. As one of the world’s largest government funded programmes, for the secondary and tertiary health care, the flagship scheme is likely to cover over 10 crore families in the underprivileged backgrounds with a cashless coverage of up to Rs five lakh a year.

“Dr KK Aggarwal, who is also the President of Heart Care Foundation of India (HCFI), a not-for-profit organisation, was speaking at the launch of the ‘Make in India for Cure in India’ and ‘Indoor Pollution is slow poison’ campaigns in the run up to the 25th MTNL Perfect Health Mela.”

Dr. KK Aggarwal, while emphasising the reason behind the Make in India for Cure in India’ campaign, eloquently pointed out, “Make In India for advanced medical technologies can help save lives by making them available to all without additional charges that imported devices have,” he said. “Such mass availability of technology can help save lives of much of the population if they are made affordable to all. Why can’t we do this? Why can’t we make these technologies available? Why can’t we make the common people aware of these technologies?” he further asked. 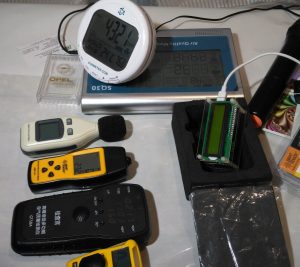 Rajiv Nath, Forum Coordinator Association of Indian Medical Device Industry (AIMED) said, “Without medical devices, there cannot be any health care delivery. With the Government’s intentions to make India a global medical devices manufacturing hub in the coming years and to achieve the overall goal of affordable healthcare for all by making all critical and life-saving medical devices available at affordable prices, it is highly imperative to translate these intentions to actual implementation.”

Both the campaigns were launched as a precursor to the silver jubilee of the annual event to be held from October 24 to 28, 2018 at the Talkatora Indoor Stadium. Going with the theme of the year, ‘Affordable Healthcare’, Mrs Dr Tusker was unveiled as the friendly elephant mascot for the event. The Mela is set to see various attractions this year apart from the inter-school and college events and health camps.
Showcasing the working of meters for gauging hardness of water, noise pollution, cross-ventilation and such indoor pollution mapping technologies, Dr. KK Aggarwal elucidated how much of the discussion around pollution is centered around Particulate Matter – PM 2.5 and PM 10 – but there are other plausible pollutants such as paints, carpets, construction activities, gas pipelines and even house structures.

Dr. KK Aggarwal apprised Delhi Post, “We are suggesting that such technologies, when available to the common population, can help make them aware of the occupational hazard of indoor pollution. At the same time, we are also talking to manufacturers that these should be made available at cheap rates or through mobile applications so that the common man can benefit.”

One of the leading architects in the country, J.K Jain, Chief Managing Director of DASNAC, said, “Indoor air pollution often goes unnoticed and can be a major health hazard even in urban areas. This makes it imperative for those in the construction business to design buildings keeping in mind the energy-efficiency angle and ensure that adequate measures are put in place to tackle indoor air pollution. Our children need fresh air to breathe and this is possible only through concerted efforts.”

Author and poet, Padma Shri Ashok Chakradhar, Chair of the Just Solve Foundation and representatives from the Delhi Government’s health and environment department, Department of Science and Technology, MTNL, Municipal Corporation of Delhi, and New Delhi Municipal Corporation, among others, were also present at the launch.

Equity Crowdfunding in the era of startups

A New Lease on Life: Street to School