Jobs for Returnee Migrants: Local Self-Governments and Cooperatives Must Lead

The relatively low wage structure prevailing in the home state and the reasonably high wages paid in other states, where there is a dearth of labour, accelerate migration.

The Government of India, with the view to arrest the spread of the COVID-19 pandemic announced a 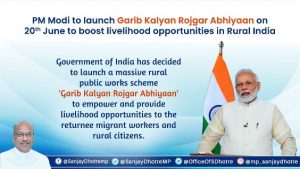 nation-wide lockdown of 21 days initially, which was extended from time to time. The most severely affected section of the society, as a consequence of the lockdown, is the migrant workers, whom states like Kerala, justly call as ‘guest workers’. It is the sweat of these guest workers that has brought about the construction of high-rise apartments, palatial bungalows, shopping malls, cinema theatres and many other personifications of luxury. They have also built the magnificent highways across the country and minimised our travelling time.

However, during the time of lockdown, when they started proceeding to their native village, having made up their mind to live or die with their family, they found that the states have sealed their borders and barricades were erected, making it appear as if travelling from one place to another is akin to that of an international journey. The poor migrant labourers, both men and women and their children who had been waiting for days together to board trains or buses to reach their native villages, even started walking by road and on railway tracks or cycled with an empty stomach and an empty purse. We have also seen the plight of children accompanying their parents by foot, through a heart-rending picture of a child trying to wake up his dead mother and another of a child resting, out of exhaustion, on a trolley bag pulled by his mother. This crisis drew nationwide attention to a section of population that depends on livelihood opportunities in states other than their home state for basic sustenance.

The lack of employment opportunities in the home state makes the labourers move out for better employment. The relatively low wage structure prevailing in their home state and the reasonably high wages paid in other states, where there is a dearth of labour, also accelerate migration. The majority of such labourers are employed in the construction industry. Some of the labourers migrate along with their family. The children of the migrant labourers are invariably not given education on account of this constant shuffle between states and the language barrier.

The outbreak of the pandemic has highlighted the plight of these hardworking men and women who are forced to leave behind the comfort and warmth of their homes and familial ties to travel to other states along the length and breadth of the nation.

To stay and work in their home state is an option that should be necessarily available to each worker and this can be done only when each state government plays a proactive role either by creating employment opportunities or by reviving the local institutions of self-government.

Right to Work and Provision for Living Wages

Article 41 , Art.43 and Art. 43B are constitutional provisions which cast an obligation on the state to provide employment, more particularly in rural areas, and a living wage to the workers, within the limits of its economic capacity.

Institutions of Self-Governments and Cooperatives

In order to give momentum to the noble ideals of the cooperative movement, the Constitution (97th Amendment Act), 2011 inserted Part IX B. The right to form cooperative societies has been elevated to that of a fundamental right under Art.19(1)(c) of the Constitution. A co-operative society is a voluntary association of individuals having common needs who join hands with the principle of ‘each for all and all for each’.The co-operative societies are now given constitutional recognition to act as vibrant bodies for development and employment opportunities at the local level.

Panchayats, municipalities and the co-operative societies have a definite role to play for the creation of 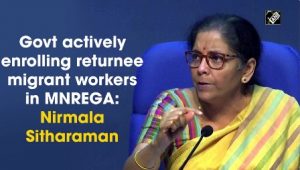 employment opportunities at the local level. The state must ensure that necessary budgetary provisions are made for the local bodies. The local self-governments must be given a free hand to plan and execute various activities like agriculture, different types of farming, construction and other allied activities by involving local people and utilising local talents. The state should associate with the local bodies to take measures to boost the village/rural economy. The people of the village must be encouraged to involve themselves in such projects as it would result in overall social and economic development of the individual, the locality and ultimately, the state.

The state must also encourage the formation of co-operative societies at the village/taluk level. It would be possible to create co-operative societies taking into account a particular trade. We have witnessed the success story of Amul formed by the Gujarat Co-operative Milk Marketing Federation Ltd., in 1946 which is owned by more than 3 million milk producers. Amul also provides employment in the form of ancillary activities.

Similar is the classic case of Uralungal Labour Contract Co-operative Society Ltd., formed by a group of labourers at Madapally in Kerala. The society has grown to such an extent that it is now a leading contractor for construction of roads, bridges, shopping malls, IT parks, etc across India. The society generates employment to thousands of people, besides its members. The success story of Amul and Uralungal Society must inspire the state governments to promote co-operative societies with a view to generate local employment and attain Gram Swaraj.

The provision of rural employment under the Mahatma Gandhi National Rural Employment Guarantee (MGNREG) Scheme helps the labourers to work locally and earn a living. However, there is a need for MGNREG scheme to be revamped, in public interest.

The present system of engaging workers through middle men should be done away with and labourers should be permitted to enrol themselves with the nodal agency created by the state for empanelment.

Panchayats should be given the exclusive power and responsibility to manage the scheme, without any further delegation. In case the scheme tastes more success, the government can consider the extension of the scheme’s total period from 100 to 150 or 200 days in a year as well as carry out periodical revision of wages.In the state of Kerala, workers under the scheme are also deputed for private farming activities. Such measures would boost agricultural production and the village economy will be strengthened.

The state of Kerala is a pioneer in promoting local self-government, generation of local employment, etc irrespective of the ruling party at the helm. It evolved various schemes like Kudumbashree, which is a self-help group comprising solely of women, for the purpose of promoting job opportunities.

Similarly, the state has been encouraging the formation of self-help groups at the village level by providing loans with subsidy. The patronage given by the government has resulted in numerous unemployed workers forming societies like the Dinesh Beedi Workers’ Co-operative Society and the Indian Coffee Workers Co-operative Society. The employment at the village level has increased tremendously with the help provided by the government.

It goes without saying that ultimately as and when there is a desire for any individual to look for greener pastures, he/she will migrate to different states. However, that does not mean that the state governments can abdicate their duty to provide employment opportunities to its natives. The local institutions of self-government should not be rendered toothless tigers by the state governments. It is also incumbent upon the institutions themselves to discharge the functions that are expected of them by the Constitution. In the words of Mahatma Gandhi, ‘My idea of Gram Swaraj is that it is a complete republic, independent of its neighbours for its own vital wants and yet interdependent for many others in which dependence is necessary’. This principle can and should be followed by the state governments to successfully ensure the welfare of its hungry and burnt-out people, returning home.

The writer is an Advocate practicing at the Madras High Court.