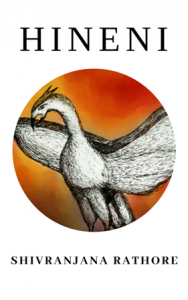 Meet Shivranjana Rathore – a self taught illustrator and writer – who has been writing full-time since two years. With a focus on mental health and gender rights, Shivranjana has been trying to incorporate various issues in different mediums whether through ink illustrations or her writings. An Economics and Development graduate, the 27-year-old is out with her very first book named ‘Hineni’ meaning ‘here I am’ in Hebrew.

The book which traces manifestations of abuse, the writer says, is a “coming of age tale of a survivor of emotional abuse”. It explores the life of Zee, a girl, who is trying to make sense of conflicts around her and how that makes her question her own identity, consequently shaping her perception of reality.

The self-published book which is open for orders on www.shivranjanarathore.com is part of a rewards programme where contributors can get rewards and can also have one-on-one sessions with Shivranjana, in case there is some “trauma” that they would like to talk about.

In a freewheeling chat with Delhi Post, Shivranjana vouches for the need of safe spaces and a society for people to be able to openly talk about emotional abuse in the context of our everyday realities.

Shivranjana: As far as my writing journey goes, while I don’t really remember when I wrote my first poem or essay, I do remember that the written word has been a sort of home to me, a place of comfort and revelation at the same time. I have been writing on the internet for close to a decade now. 2013 was when I extensively explored poetry as a medium for emotions and ideas that flowed naturally in it. A key driver for my writing is finding silent voices through words. I consider my job done if my words unravel something within the reader’s mind.

Shivranjana: One of my worries when writing Hineni was exactly this – the terming of ordinary negative or unpleasant behaviour, as abusive. However, that is also what drove me to plunge into researching it.

Emotional abuse essentially is a very fundamentally debilitating form of negative behaviour. The term in itself, seems self-explanatory but, since the impact is not visible to the eyes, the extent of the abuse is not fully acknowledged.

I call this the Emotional Ghost Syndrome where prolonged emotional abuse results in the survivor to actually feel like a ghost. I have written about five common behaviour patterns of an emotionally abusive person there. If someone is shouting at you, or has treated you badly, they need not be emotionally abusive unless this becomes a toxic pattern driving you to doubt your own sense of self.

Also read: Why we miss #MeToo for the neglected majority?

Delhi Post: What prompted you to write on emotional abuse for your first book?

Shivranjana: A lot of things synergised for me to write this book – my own experiences with emotional abuse and my journey of healing myself, my questioning of the Indian family structure and how defunct relationships continue to exist just in the name of family.

Also, once I learnt of my PTSD (Post-Traumatic Stress Disorder), it struck me that it is something that one imagines only military folks suffer from whereas, there are probably countless regular people living with PTSD, suffering probably unaware of their situations! If you ask me, we are further creating a world of traumatised children, and not talking about it was something that I could not live with!

The fact that with time, the extent of civil strife or climate change catastrophes are only going to further the trauma, I found myself caught in a sense of urgency to have this conversation because I believe that to cope with the damages that difficult situations bring in emotionally, besides finding solutions to stop those things, we primarily need to go back into rebuilding our understanding of individuals and society again. It was years of reading, writing, researching on these things that made me feel like it was my responsibility to write Hineni.

Delhi Post: Tell us about the characterisation of Zee.

Shivranjana: Zee felt like a character who has always lived a parallel life in my mind since the time I can remember spinning stories. She is a typical product of the society, she is brave but at the same time fearful, she nurtures but at the same time needs a little support herself. Just like she has existed in conflicting parallels in my mind, she is conflicted most of the time. There is an inner reality, a force that defines her but the world outside her has defined reality for her in ways that she doesn’t agree with nor understand, which becomes the source of conflict and then, eventually the drive for her to search for her own reality. Most people who read this book, I am sure, will recognise this conflict in searching for one’s identity, something that all of us have, or continue to grapple with.

Delhi Post: What can our readers learn from your book?

Shivranjana: That dysfunctional families and abusive families are a far common reality than what we would like to believe. What I hope for the readers to get out of this book, is a path into their own minds and self awareness. Additionally, through Zee’s story, I want people who suffer in the name of family or honour, or in any way, feel trapped in their situation, possibly feeling ashamed or strange for being in an abusive situation, to not feel isolated. I want them to know that they are not alone and that there is a way out.

Delhi Post: A “perpetrator” may be emotionally abusive without knowing it and the victim may choose to stay silent. Is there a way to break such internationalisation of abuse?

The relationship I have tackled in Hineni is that of a parent and child. The reason I decided to tackle this enormously challenging topic was the fact that emotional abuse is far too common in India than we realise. It is true one can be emotionally abusive without knowing themselves to be so but, in my experience and research so far, most emotionally abusive people tend to be products of abuse themselves.

In case of abusive parenting, contrary to an abused child growing up to be a nurturing parent, ends up becoming abusive themselves. Such is the impact of abusive parenting or an intensely emotionally abusive relationship, that it severely affects the emotional reality of the person. This, is of course, for cases where the survivor has either not had the space to heal or is not even aware of the need to heal. And if you ask me, it’s a huge mix of both in India – neither do most have the space or the language to heal nor do they have the awareness, which is why, a survivor may remain silent.

As far as breaking through this cycle of internalisation of abuse is concerned, it is only through having safe spaces and a society for people to be able to openly talk about it, can a survivor break out of this pattern.

Delhi Post: In today’s times, mental health issues have started to come out in the open. Do you think there is healthy discussion on emotional abuse too?

Shivranjana: I think it has definitely started somewhere because very slowly, words like “emotional labour”, “ trauma”, “emotional abuse”, are becoming part of a larger cultural vocabulary; which for a survivor of abuse is a potential break as opposed to the jarring silence. I think the #MeToo Movement, in particular, has highlighted the systemic gendered nature of emotional abuse as well, which is again terrific!

However, I still think that there needs to be more personal acceptance of emotional abuse, just allowing for safe spaces to open up in our houses and neighbourhoods for people to talk and not feel attacked or judged in case someone can’t relate to a survivor’s experience. Most often, victims don’t open up for fear of not being believed or being interrogated by those who they trust or hang out with. That becomes harrowing for someone already suffering. While we may tweet about it, we need to regularly check in with ourselves and our families, ‘Do we accept that emotional abuse is real?’

I say this particularly because one common thought process of intergenerational abuse is the survivor potentially denying abuse after calling it out, fearing that one might have over-reacted, something the abuser uses often to disempower the victim. However, when at a community/society level, we have genuine acceptance of abuse as a reality, then these doubts would be easy to crush. Having a common language and acceptance makes the survivor feel a little less helpless, a little less isolated.