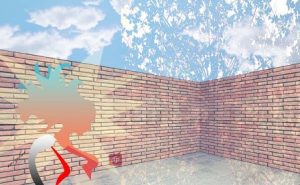 She stood there staring at the walls,
Only an observer could say.
For hours, it had been now,
Even the winds couldn’t explain.

They say they wrapped her with fragrance,
Yet a gaze so relentless to dissuade.
They say they poured tiny droplets,
Only a spirit if they could wash away.

The clouds roared in anger,
The foliage shivered in fear,
Still she stood standing, just gazing,
As if only the walls she could hear.

Moral-animals, animals, human-animals,
All barked their wisdom of the woods .
For the heavens had come down on earth,
Look, still she won’t look!

Soon came a melody from the north,
Tattered, he just owned some wood.
Yet he could hold a spirit so firm,
That not even the heavens could.

He played, they rebuked, hurled insults-
The animals of sophistication they all say
Yet soon they all screamed with awe,
Because look, she just looked away!