There is a paucity of literature on the prevalence and the emotional problems faced by individuals with homosexual orientation, primarily due to lack of generation of systematic data. 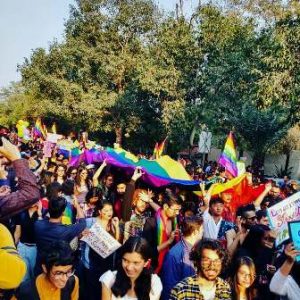 The reading down of Section 377 in 2018 through Navtej Johar v. Union of India marked a watershed moment for LGBTQ (Lesbian, Gay, Bisexual, Transgender and Queer) communities across India. The prolonged legal battle ended after several obstacles, including the over-turning of the Delhi High Court’s verdict by the Supreme Court in 2013.

However, the real challenges are now coming to the fore, as the community begins to tackle issues such as limited access to healthcare and workplace discrimination. Mental healthcare is one such issue – but manifold challenges remain.

Research from the American Psychological Association (APA), the Centre for Disease Control in the UK and other organisations have reported a higher incidence of mental health issues among LGBTQ persons than their heterosexual counterparts.

The risk of suicide, anxiety disorders and clinical depression are much higher among LGBTQ teens and adults than heterosexuals. Societal pressure, manifesting as bullying, discrimination at workplaces/educational institutions, limited access to healthcare, housing etc. are some of the major contributing factors to mental health problems.

“In addition, sustained stress from societal pressure can cause feelings of inferiority, shame and difference. In addition, many LGBTQ people do not have familial and peer support, which puts them at further risk of ostracisation and mental illness.”

The mental health-related classification system (DSM) of the World Health Organization also does not deem homosexuality as a disorder. Regrettably, homosexuality continues to be stigmatised due to which queer individuals experience chronic stress.

There is very limited awareness surrounding issues of mental health itself in India, let alone the specific challenges of the LGBTQ community. Psychiatric care and treatment continue to be inaccessible due to a limited number of trained professionals as well as the costs of treatments involved. Considering ignorance and prejudice of LGBTQ persons are commonplace in India, these mental health issues might be significantly magnified, although specific numbers and statistics are not accessible.

There is a paucity of literature on the prevalence and the emotional problems faced by individuals with homosexual orientation, primarily due to lack of generation of systematic data. Due to this, there is very limited information available on how to target the gaps in care experienced by LGBTQ people in India.

“While some psychiatric journals in India have spoken about the issue, information gaps remain.”

However, the Indian Psychiatric Association (IPA) has on some occasions unequivocally stated that homosexuality is a natural variation of sexual orientation, and that LGBTQ people as such should not be made to change their identity or orientation.

The mental health challenges facing the community include but are not limited to shame and lack of self-esteem due to lack of awareness and discrimination, suicidal thoughts, anxiety disorders, body image issues and depression.

However, due to the lack of access to care, many individuals go undiagnosed, which leads to harmful behaviour such as self-harm, alcohol and drug abuse or more tragically, even suicide.

Fear of rejection or bullying can take a severe toll on mental health. Often, parents bring their children to psychiatrists hoping to cure their children of their homosexuality, despite established scientific knowledge suggesting that the same is not possible.

“Although the IPA has asserted that sexual orientation cannot be altered, some mental health professionals suggest ‘conversion therapy’, which has been shown to be harmful and unscientific.”

In addition, some mental health and other healthcare professionals across the country may even discriminate against LGBTQ persons which dissuade many from even approaching them for treatment. There is a significant danger of a mental health epidemic in case these pressing issues are not addressed urgently.

Navtej Johar and The Way Forward

By placing reliance on the Mental Health Act, 2017, the Supreme Court has encouraged the medical fraternity to be sensitive to the issues of the community, and stop treating queerness as a disorder – in line with international standards, since that is what the Mental Health Act envisages. The directions of the court in this regard are immensely important – this would mean that the medical community might need to formulate regulations for tackling discrimination against LGBTQ patients, as well as improve sensitivity among the medical fraternity.

“In addition, adequately sensitised mental healthcare professionals can play a vital role in combating the stigma and discrimination associated with LGBTQ people in Indian society.”

They can play a role in informing their patients and give gay-affirming therapy to help them accept their orientation and live a happy life.

In addition, counsellors can be trained in easing the ‘coming out’ process for LGBTQ persons. By busting stereotypes and explaining to the parents and relatives the normality of alternate sexual orientation, they can help families accept their children as they are, without altering their sexual orientation. They can ease the coming out process, thus reducing the stress and anxiety felt by many LGBTQ persons due to the same.

Efforts to improve the mental healthcare infrastructure in India must be accompanied by LGBTQ inclusive policies to ensure that the widest range of people can afford and access treatment as necessary.

The writer is a student of law at National Law University, Delhi. He can be reached on twitter @synthplume