Marching for a world of work free of violence and harassment 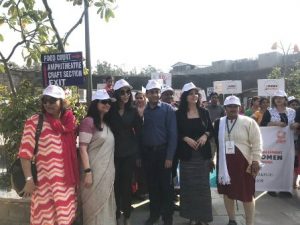 Not long ago, #MeToo trended on social media platforms. There were many who named and shamed their perpetrators and there were others who chose to just share their ordeal. Some stayed away. But almost all of those on social media connected to common experiences of violence and harassment including gender-based violence at work, on the road, at homes etc. However, what about those outside the limited world of the internet?

Since sexual harassment is a universal everyday reality, many felt that there is a need to raise awareness levels of women and girls about their rights, entitlements and empower them to raise their voices, especially keeping the unorganised sector and underprivileged women in mind, alongside sensitising the other genders.

“Sustained movements led to the International Labour Conference which agreed to set up a new ILO Convention on ‘Ending violence and harassment in the world of work’ in May-June 2018.”

The legally binding convention indicated that future countries will have to adopt national legislation to tackle workplace violence and harassment.

To spread awareness on this Convention, #March4Women 2019 was launched on International Women’s Day on March 8. Week-long pre-event awareness activities included discussions and dialogues, street plays and other engagement activities on gender-based violence were conducted across the world for women in prisons, domestic workers, construction workers and trade unions.

This march was part of a larger campaign organised by CARE India and PAHAL, two non-profit organisations working to bring an end to gender-based violence.

Also read:Why we miss #MeToo for the neglected majority?

“Workplaces are often thought of as a structured building where people are entering to do work. But that is not the only space or kind of work. Harassment with them is not the only kind. Even labourers, domestic workers, construction workers face harassment. Slowly, they have also started to realise it,” Dr. Jeetender Kumar Singh, General Secretary, PAHAL told Delhi Post.

Notably, more than one-third of the world’s countries do not have any laws prohibiting sexual harassment at work, leaving a staggering 235 million women vulnerable in the workplace. In India, though laws are in place with Maternity Benefit Act, 1961 providing 26 weeks of paid maternity leave, and the Sexual Harassment of Women at Workplace (Prevention, Prohibition, and Redressal) Act, 2013 enacted to help those who face sexual harassment at work and Unorganized Worker Social Security Act, 2008 for proper working conditions including ensuring health, safety, welfare, proper working hours, leave, creche facilities for children, and other benefits, the implementation remains a key challenge.

“#March4Women is a global campaign of CARE internationally which happens in 90 countries across simultaneously. It is because of the belief that empowerment of women and girls is necessary to poverty alleviation and social justice,” said Madhu Deshmukh, CEO, Care India.

The march was flagged off by prominent personalities including filmmaker, theatre director and writer Avijit Dutt, film actor and social activist Hrishitaa Bhatt and Advisor at Jagori, Suneeta Dhar. The march culminated with the signing of a Charter of Demands.

“The signed Charter of Demands will be presented to the government and advocacy measures for formalising the demands will be made.”

Quality health services to most marginalised women and girls, education, equal opportunity for women and girls and economic empowerment are some of the demands in the charter released at the march.

“In all of this, the sexual harassment and the violence are innate. As an everyday reality happening in our backyard, a woman faces violence as a backlash when she is empowered. Through CARE’s programmes, we strongly believe that empowerment is the right approach from the human rights point of view and essential to achieve Sustainable Development Goals,” Deshmukh told Delhi Post.

Besides the march, the event also included talks, panel discussions, theatre and cultural performances which called for stronger policies and action on preventing harassment in the world of work and violence against women.

Necessary to build a political mandate for Decentralised Renewable Energy