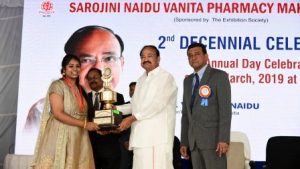 Calling for strict adherence to global standards in manufacturing drugs, the Vice President of India, M. Venkaiah Naidu has said that world class drugs with unwavering quality at very affordable prices is the need of hour, and exhorted the industry to earmark more resources for discovering new molecules and new drugs without compromising on the affordability of drugs.

“I was informed that over 65 per cent of the WHO’s (World Health Organization) demand for DPT and BCG vaccines and 90 per cent measles vaccine are supplied by India. Thus, India’s contribution to global healthcare has been spectacular,” he said.

The Vice President further said that India had become the largest provider of generic drugs globally and in supplying anti-retroviral drugs used worldwide to combat AIDS.

“India is rendering a yeoman service in developing countries by providing access to life saving medicines at affordable prices. With Indian companies producing the drugs at economical rates, the cost of HIV/AIDS treatment has gone down from $ 12,000 to $400 per year,” he stated in his address at the 2nd decennial celebrations of Sarojini Naidu Vanita Pharmacy Maha Vidyalaya, in Hyderabad where he also presented gold medals to 10 meritorious students.

“The ‘Atharvaveda’ is a treasure trove of knowledge and wisdom in the field of medicine. It is lauded as the earliest source of medical information in India. Ayurveda has been regarded as ‘anupaveda’ or a subtext of the ‘Atharvaveda’. The mantras in the ancient texts contain a wealth of information regarding herbs, metals, medicines, diseases and treatments. They speak of the astounding properties and powers that herbs and plants possess to cure diseases,” he said.

“New healthcare challenges are emerging every day, especially with the alarming rise in the number of non communicable and lifestyle diseases and cancers. New molecules and new drugs will have to be discovered and treatment protocols will have to be continuously upgraded and updated,” he opined, referring to the group of diseases called as “rare diseases”.

In India, the number of people suffering from rare diseases is estimated to be more than 70 million. While it is estimated that there are around 7,000 rare diseases in the world, majority of diseases have no treatment and the costs are prohibitively expensive in cases where they are available.

Notably, the pharma industry has posted a robust, double-digit growth over the last few years. The industry was worth US $36.7 Billion in 2017 and is projected to grow to US $55 Billion by 2020.

Stressing that pharma industry has been posting a robust growth over the last few years, the Vice President said that the industry was projected to grow to US $55 Billion by 2020. He called up on the industry, governments at state and centre to utilise the industry’s growth potential to create job opportunities for youth with the thrust on research and innovation.

“I urge young researchers to work towards standardising and benchmarking Indian systems of medicine. Using globally established experimental protocols, you must establish the efficiency, validity and efficacy of the traditional medicine,” he stated.

While mentioning that “speedy introduction” of generic drugs into the market should remain the focus, he said that rural health programmes, lifesaving drugs and preventive vaccines should also receive attention from policymakers and pharma companies alike.

The ‘Pharma Jan Samadhan’, a customer grievances redressal system and a mobile application ‘Pharma Sahi Daam’ that provides real-time information to consumers on prices of Scheduled/Non-scheduled medicines are already in public domain.

He also stated that since pharma sector has the crucial responsibility of saving human lives, pharma companies must go “above and beyond their CSR mandates” to provide life saving and other essential drugs to those who cannot afford them.

Marching for a world of work free of violence and harassment

My aim is to inspire the SDGs dialogue: Grammy Award musician Ricky Kej