Ministry of Earth Sciences has developed a new and high-end system for ocean forecast in the Indian Ocean.

An accurate and timely ocean forecast system enables the safe conduct of maritime activities such as fishing, shipping, and offshore industries. In the latest, a new and high-end system 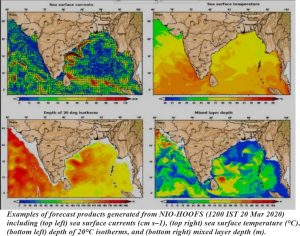 for ocean forecast in the Indian ocean has been developed by the Ministry of Earth Sciences (MoES). With this, the countMry is set to receive ocean forecasts with a lead time of more than three days.

The forecast system is named HOOFS, for High-Resolution Operational Ocean Forecast and Reanalysis System. It would benefit the public, academia, and other types of users such as navigators and the Indian coast guard in a big way. It will provide information and forecasts on the ocean currents, temperature, tides etc, which can boost the blue economy. It will also help to forecast potential fishing zones in the Indian Ocean which will save cost and time for the Indian fishing community. Besides, it is also equipped with SARAT, a rescue aid tool. This can help locate missing and stranded objects or persons in the sea. Another offshoot product of HOOFS is the mapping of oil spill trajectories, which can determine the area affected by an oil spill.

Although about a dozen ocean forecast systems exist worldwide, HOOFS has been specifically designed for the Indian Ocean and the surrounding Arabian Sea and Bay of Bengal. For this, researchers had to overcome several challenges like tuning the models to simulate variability in ocean parameters in highly fresh waters of the Bay of Bengal and dealing with anomalies in sea levels.

HOOFS is based on a modelling system called ROMS or Regional Ocean Modelling System. It assimilates internationally and locally- available data on physical and biogeochemical state of the Indian Ocean.

It produces the analysis and forecasts of various oceanographic such as currents, temperature, salinity in surface and subsurface ocean, tides, and sea level.

Dr P A Francis, scientist at INCOIS who led the team of scientists who developed the system said, “INCOIS is now exploring the possibility to assimilate more near-real time data into the system and improving the parameterisations of physical processes in the model. This will improve ocean forecasts in a big way”. His team at INCOIS and collaborators from NIOT, IITM, NCMRWF, NIO and IISc have published their findings in the August issue of the Bulletin of the American Meteorological Society.

Serving Some Summer-y Scoops of Love