This book, however, proved me wrong. Perhaps one of his most popular works, it's a gripping murder mystery and an interesting love story set in 16th century Istanbul, amidst miniaturists.

I picked up a book written by Orhan Pamuk after ages. Istanbul was his first book I had read and loved, but post that, I didn’t like any other book I had read by him (like Black Book and Snow), 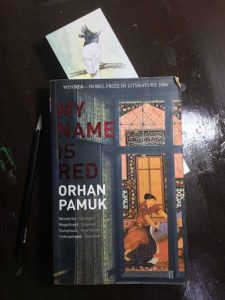 so I assumed he was good at writing non-fiction, but not so gripping with fiction. This book, however, proved me wrong. Perhaps one of his most popular works, it’s a gripping murder mystery and an interesting love story set in 16th century Istanbul, amidst miniaturists. There were many things about the book, due to which I couldn’t put it down: unique narration style, Istanbul, historical setting and most of all the in-depth description of the miniature painting scene: practices and influences prevalent in that era.

Unique Narration Style: Every chapter has a different narrator, starting with the corpse who had just been murdered. It took me some time to figure that out, so I had to reread the initial chapters to comprehend the story completely. Besides the main characters, the book also had interesting non-human narrators that had been painted like: dog, tree, horse and coin.

Miniature Painting: The book describes in great detail the prevalent miniature painting practices and beliefs of the period in Istanbul and how from Persian (eastern) influence, it was getting influenced by the realist style of the West—Venice, regarded as infidels, especially the use of perspective and life-like portraits. Calligraphy was regarded higher than illustration as an art form and a miniaturist was not supposed to have a style and couldn’t sign his name.

Also Read : Revisiting a Murder and What it Takes

The book also talks about Bihzad, the master miniaturist from Herat, in great detail and also the common stories 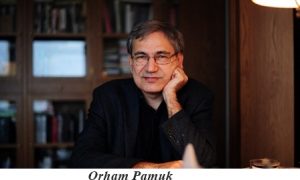 like Shirin and Khusrow, they used to illustrate. The book definitely holds immense value to anyone who likes and appreciates art. This was the feature that really drew me to the book. It successfully transposes you to that golden era.

Cover: Here’s something which I didn’t quite agree with. I had the book edition with the black cover and illustration by Master of Flémalle (a Flemish painter) of a murder scene. I would have preferred the illustration by Bihzad of the scene from Shirin and Khusrow where Shirin sees a picture of Khusrow in a garden and falls in love as both Bihzad and this illustration are so central to the plot of the story.

I have, anyhow, designed my version of the cover using this illustration

Historical Timeline: I have prepared an illustration below to depict the era that the story of the book has been set in and the dynasties and cities that influenced art of that period. Interesting to now how art and artists traveled between the country, despite the distance. 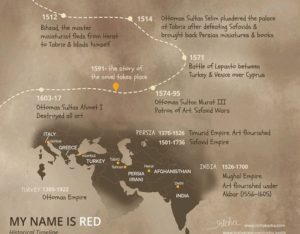 My Favourite Quotes from the Book

“Before my birth, there was infinite time, and after my death, inexhaustible time. I’d been living luminously between two eternities of darkness.”

“For if a lover’s face survives emblazoned on your heart, the world is still your home.”

“A letter doesn’t communicate by words alone. A letter, just like a book, can be read by smelling it, touching it and fondling it.”

“Painting is the silence of thought and the music of sight.”

“The beauty and mystery of this world only emerges through affection, attention, interest and compassion . . . open your eyes wide and actually see this world by attending to its colors, details and irony.”

“Colour is the touch of the eye,
Music to the deaf,
A word out of darkness.”

The writer, a Freelance Illustrator and Graphic designer, is a voracious reader. She is a chemical engineer by qualification, but now pursues her passion in art, nature and literature full time. She can be reached @RichaKedia

Are We Losing the Battle Against COVID-19?

Gautamapuram and Beyond: Towards a Cultural History of Kottayam