National Day of Solidarity for Stan Swamy Held Across India

Representatives of the civil society organisations, who attended the National Solidarity Day gathering at Jantar Mantar in New Delhi, shared that Fr Stan is the first among the equals of the several arrested in connection with the fabricated Bhima Koregaon-Elgar Parishad case, considering his age being 83 and of poor health.

Several human rights defenders, academicians, activists and human rights organisations have come together against the arrest and custodial interrogation of 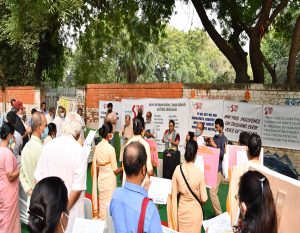 human rights activists in India. The National Day of Solidarity was called to appeal to the conscience of the people of India and the world against the misuse of law and abuse of power leading to the implication of prominent social activists, public intellectuals and human rights defenders in false and fabricated cases.

Expressing his solidarity with Fr Stan Swamy, Jerome Stanislaus D’ Souza, President of the Jesuit Conference of South Asia (JCSA), said “this is a day of collaboration for justice. Fr Stan’s arrest has shaken the consciousness of our country”.

D’Souza has demanded immediate release of Fr Stan on humanitarian grounds, considering his age and as he is suffering from Parkinson’s disease.

Shabnam Hashmi, Anhad, condemned the arrest of Fr Stan, and raised the question why Modi government is so afraid of the 83-year old. Shabnam added that the case against Fr Stan is nothing, but a fabricated one. Prof. Apoorvanand, Delhi University, said that Fr Stan was a fighter for justice. He raised his voice for the poor and the tribals of Jharkhand, who are denied justice for years. Harsh Mander, Director, Centre for Equity Studies, New Delhi, Paul Divakar, National Campaign for Dalit Human Rights (NCDHR), Dr Denzil Fernandez, and others joined the hundreds who attended the solidarity meeting held at Jantar Mantar, New Delhi. Human rights activists like Medha Patkar, Henri Tiphagne and John Dayal addressed the gathering over Zoom.

There has been a national outrage at the arrest of Fr. Stan Swamy on 8 October, disregarding his advanced age, his health condition, his reputation as a prominent Christian leader and the yeoman services he has rendered to marginalised sections of society in the country. Fr Stan was taken from Ranchi by the 9.30 am flight on 9 October to the Sessions Court in Mumbai where the charge sheet was filed, and he was sent to Taloja jail.

Mary Lawlor, UN Special Rapporteur on the Situation of Human Rights Defenders, had expressed her concern regarding the arrest of Fr Stan Swamy by India’s National Investigation Agency (NIA) from Ranchi in Jharkhand.

Representatives of the civil society organisations, who attended the National Solidarity Day gathering at Jantar Mantar in New Delhi, shared that Fr Stan is the first among the equals of the several arrested in connection with the fabricated Bhima Koregaon-Elgar Parishad case, considering his age being 83 and of poor health. Moreover, his name is not being there on the First Investigation Report (FIR). He has been working tremendously among the marginalised, downtrodden and other vulnerable people, especially the tribals in Jharkhand state for several decades.

Fr Stan was questioned multiple times for over 15 hours by the NIA at the Jesuit residence in Bagaicha, Ranchi, in July and August. He was again summoned to the agency’s Mumbai office last week in connection with the Bhima Koregaon-Elgar Parishad case. Despite consistently denying all allegations made against him and cooperating with the agency in their investigation, NIA took him into custody. It is highly deplorable that the 83-year old has been taken to Mumbai in the midst of the global pandemic COVID-19 and against the Jharkhand government’s directive that those above 60 years of age may not venture in public. Fr Stan had informed the officials that he is not in a position to undertake such a long travel considering his age and the pandemic, and is willing to subject himself to questioning over video conferencing. 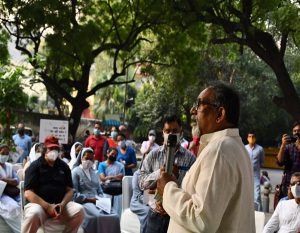 In a video statement a few days before his arrest Fr Stan said, “What is happening to me is not unique. Many activists, lawyers, writers, journalists, student leaders, poets, intellectuals and others who stand for the rights of Adivasis, Dalits and the marginalised and express their dissent to the ruling powers of the country are being targeted.”

Fr Stan has consistently worked on various issues of the Adivasi communities on land rights, forest rights, labour rights and representation of the community members in the state of Jharkhand.  He has been vocal about the “indiscriminate” arrest of thousands of young adivasis by the investigating agencies labelling them as “Naxals”. He had filed a public interest petition in the Jharkhand High Court against the state, asking for all such undertrial prisoners to be released on a personal bond, and also for conducting a speedy trial.

Something Really Strange I Find…