Chakrata has a panoramic landscape and natural beauty, dividing the watershed of the Tons River in the west and the Yamuna River in the east.

It was the last day of the last month of 2019. I along with my family – daughter and wife – started travelling to Chakrata from Dehradun. Dehradun (652 m) is a city situated in the 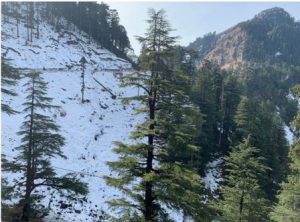 beautiful fertile valley, between the Ganga River in the east and the Yamuna River in the west. It was about 2:00 PM at Dehradun, and we hired a private taxi and moved to Herbertpur (445 m), a town situated at an altitude of about 427 m, on the national highway between Dehradun and Paonta Sahib, about 34 km from Dehradun. From Herbertpur, one way goes to Vikas Nagar (470 m) about 5 km, which is situated on the Yamuna Valley. A hydropower project has been constructed on the Yamuna River in Dakpathar, closely located to Vikas Nagar. All three places – Herbertpur, Vikas Nagar, and Dakpathar—have been closed as the areas are now inhabited by human population. After proceeding from Vikas Nagar, a township and cantonment area, Kalsi (508 m) is situated on the bank of the Yamuna River about 10 km. Kalsi is known for its heritage importance. The Great Emperor Ashoka’s inscription as rock edicts is present in Kalsi.

The entire route between Dehradun and Kalsi is spectacular with full of tea gardens both the sides of the road. From Kalsi, the road goes through hilly and rough and rugged terrain with many curves. After travelling about 20 km distance from Kalsi, Sahiya town (1052 m) is situated. The area between Kalsi and Sahiya obtains several mango orchards. An adventure starts from Sahiya through mountain roads passing through steep slopes and grasslands. On the way, a village named Korba is situated about 20 km from Sahiya, which has a rich ecosystem.

The upper reaches of the village have mixed coniferous forest and in the lower reaches, pine forests are found.

It was about 6:00 pm when we reached the Korba village and in a Dhaba (small restaurant), we had refreshments. The Sun was setting. Luckily, we were close to the sunset point, and we stayed there until the sunset. The reddish rays of the Sun fell on the dry grasses and the whole area was shining like gold. The atmosphere was chilled as we were about 1700 m altitude and it was the winter season. There are few modern tourist lodges available in Korba village. During the season, when Chakrata is overcrowded, tourists stay in Korba village. Chakrata is 10 km from Korba. We reached the Chakrata at about 8:00 pm. The small township of Chakrata was full of tourists. We tried a lot and finally got a suit for night stay. Immediately after reaching Chakrata town, we went for a dinner, and we had rajma (variety of pulses) curry and rice as the staple food –nutritious and tasty. It was a cold night as a day before, the town and its surrounding areas received heavy snow. 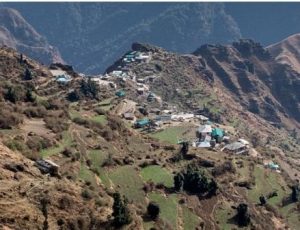 Chakrata, known as a magical town of the Garhwal Himalaya, is situated on a long ridge covered by dense coniferous forests at an altitude of 2200 m. Established by the Britishers, it is the headquarter of a sub-administrative division of Dehradun District. The town and its surrounding area come under Jaunsar–Bawar cultural realms, which is very unique in terms of its cultural and natural aspects. The environment is pollution free and healthy. It can cure all lungs related diseases. Summers are very conducive, whereas, snow falls during the winters. Chakrata has a panoramic landscape and natural beauty, dividing the watershed of the Tons River in the west and the Yamuna River in the east. Most of its area comes under army cantonment.

The food habit, clothing, culture, and customs of the region are quite rich and different than the other parts of Uttarakhand.

Also Read : The Rise and Shine of Baluchar Textiles

We got up early in the morning, had breakfast, and started visiting some important tourist sites. First, we reached the Kharamba top, which is the highest place in Chakrata town. The mountain range of the Himalaya can be seen from the top from the north side and on the other side, there are many beautiful valleys with dense coniferous forest patches. It was a cold morning. The other side of the Kharamba top, army training was going on and they did not allow us to go there. The next destination was the Tiger Fall, which is situated in a valley about 30 km northward from Chakrata. The road leading to the fall was narrow and bad in condition. After reaching there, we saw many people gathered there to view and enjoy the Tiger Fall. The Tiger Fall had enough water with its height about 20 m. The spectacular landscape surrounds the fall. We came back and moved to the Snow Mountain, which is situated about 40 km from Chakrata towards Tiuni village (northwest part). The Snow Mountain has a spectacular landscape, covered with dense coniferous forests. A large number of tourists visit the Snow Mountain during winters when heavy snowfalls. As the altitude of the Snow Mountain is about 2700 m, it was very cold.

Surrounding of the Snow Mountain, many villages are situated. They are the centres of peace and leisure tourism. The other tourist destinations are Tiuni, Mori, Hanol, and Lakhamandal, which can be covered in two days. They are both natural and cultural places. However, these villages are lacking in accommodation facilities. Homestay tourism can be developed in these villages to promote natural and adventure tourism. We stayed for about two hours in the Snow Mountain and its surrounding areas and came back to Chakrata. After a night stays in Chakrata, we returned to Dehradun by the same route.

(Images by the author)

National Day of Solidarity for Stan Swamy Held Across India