Data shows that of all candidates fielded in Tamil Nadu, Kerala, Assam, West Bengal, and Puducherry for the 2021 Assembly Elections, only 11 per cent are women.

Assembly Elections are currently underway in four states and one union territory of India. Altogether, roughly 6500 candidates will be battling for power in Tamil Nadu, Kerala, West Bengal, Assam, and Puducherry. Of 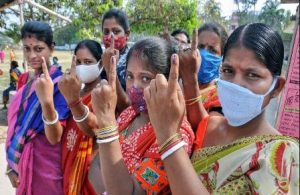 this, a mere 700 are female candidates, amounting to roughly 11 percent. While this is a slight increase in comparison to previous elections, it still shows an abysmally low rate of female participation in the democratic exercise. The 2021 Assembly Elections are being held in 665 constituencies across 5 drastically different regions, and through this article, we attempt to gauge the condition of female candidature in the battle for electoral power.

Tamil Nadu, along with Kerala and Puducherry, went to polls on April 6th. The state saw a big share of the battle as candidates contested for power in 234 constituencies. TN also had the maximum number of candidates (3559), among which 378 were women. The share of female candidates in the TN 2021 elections was 11 per cent, which is a slight rise from the 2016 and 2011 elections where 320 and 143 women participated, respectively.

Also Read : Women in Politics: Beyond Token Representation in Parliament

The battle in Kerala was fought between the NDA, the United Democratic Front, and the incumbent Left Democratic Front for power in 140 seats. Only 103 of the 928 candidates that stood for elections were women.

The Bharatiya Janata Party (BJP) fielded the maximum number of female candidates-16. CPI (M) and INC fielded 11 and 10 women candidates, respectively. In the district of Kasargod, only 1 woman fought the election in the 5 seats.

UDF’s Indian Union Muslim League only put forth 1 female candidate, a first in 25 years, which brought in a lot of criticism. However, Kerala also saw a historic battle in Kottayam district’s Vaikom constituency where candidates fielded by all 3 fronts were women- C.K. Asha (CPI-M), D.R. Sona (INC), and Ajitha Sabu (BJP).

The trends of female participation in WB showed a marked increase as the incumbent All India Trinamool Congress put forth 50 women this year, which is 5 more than the previous state elections.

The battle in WB was fought in 294 constituencies between 939 candidates, of which 119 are women. Needless to say, the WB elections are being looked at with the most curiosity due to the extremely high number of seats up for grabs. The ratio of female candidates in WB pitched by all fronts stands at 11 per cent. Three fronts, namely the NDA, the Samyukta Morcha, and the incumbent AITC+ participated in the electoral battle.

The BJP fielded 39 women candidates out of its total 293, while the Sanyukta Morcha consisting of INC and CPI (M), among several other alliance partners, fielded 30 women.

Also, neither of the three fronts put women candidates to battle in the Alipurdar, Kalimpong, and Darjeeling districts. While one female candidate is fighting independently from Alipurdar district, there is a complete absence of female candidacy in the latter ones.

The electoral battle in the union territory of Puducherry is being fought on 30 seats. Out of the 32 candidates fielded there by several fronts, only 11per cent (36) are women. Assam, however, shows the lowest female electoral participation with only 76 of the 941 candidates being women. The ratio of female candidates stands at an abysmal 8 percent in a state were 126 seats are being contested by multiple alliances.

According to the Election Commission of India, the number of female voters in several of the above-mentioned states is more than the male voters. For instance, Tamil Nadu has 3.19 crore female voters and 3.09 male voters. In Bengal, 3.5 crore (49 per cent) of the total 7.2 crore voters are women, and the figure crosses 50 per cent in states like Kerala and Andhra Pradesh.  With figures of female participation ranging this low at a time when several parliamentarians and policy groups are advocating for the implementation of 33 per cent reservation of women in state assembly and parliament, it is pertinent that parties focus on balancing candidacies.

Mid-Day Meals and the Detrimental Impact of COVID-19