Mid-Day Meals and the Detrimental Impact of COVID-19

The Coronavirus induced pandemic in 2020 has pushed roughly 83 to 132 million people into hunger and malnutrition. A total of 370 million children across the world will miss out on nutritious school meals, 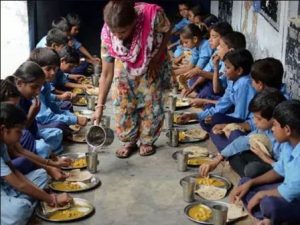 estimates the UNICEF report on Food Security and Nutrition. Within the Indian context, the pandemic has grossly affected the Indian Government’s flagship school feeding program, that is, the National Programme of Nutritional Support to Primary Education or Mid-Day Meal (MDM) scheme, launched in August 1995. The mid-day scheme is the world’s largest school-based meal program and feeds 12 crore children. The intent of the centrally sponsored scheme was to boost enrollment and attendance for primary education, while simultaneously taking care of nutrition for children. The scheme has reduced dropout rates across the country, particularly for girls and children from disadvantaged sections. A study by IIT Kanpur and European School of Management and Technology, Berlin, showed that children who received mid-day meals got better at their reading and Math exams.

Launched on August 15, 1995, MDM started by providing one meal to every student in primary government schools within 2,408 blocks across the country. Following a 2001Supreme Court order, the program was implemented in all government primary schools. In October 2002, students of the Education Guarantee Scheme (EGS) and Alternative and Innovative Education (AIE) centers too began receiving a mid-day meal. Later in 2007, the scheme extended its student cover to include Upper Primary students.

In 2008, Madarsas and Maqtabs under the Sarva Shiksha Abhiyan started receiving the benefits of this scheme. The Right of Children to Free and Compulsory Education Act, 2009, mandated that every school have provisions for a kitchen. The National Food Security Act (2013) made it compulsory for a student up to the age of 14 years to receive a cooked and hot mid-day meal. As of 2018–2019, 9.17 crore children in 11.35 lakh schools are benefitting from this scheme.

Mid-day meals are a combined effort of both the Central and state governments. At the central level, it comes under the Ministry of Human Resource Development (MHRD), and at the state level, it comes under the department of Education or Women and Child Development. Many states also partner up with NGOs like Akshaya Patra Foundation, Annamrita Nandi Organization, and ISKON among others to execute the scheme.

This shows that states with higher literacy than the national average of 74 per cent have been effective in distributing mid-day meals in their own states.

When it comes to finances, 60 per cent of the cost for mid-day meals are provided by the Centre, while the states contribute the remaining 40 per cent. In the northeastern states, the Centre provides 90 per cent, while in the Union territories the complete cost is provided by the state. The Centre’s role is to distribute free food grains, while the cost of cooking, transportation of grains, kitchen infrastructure and helpers is shared between the Centre and the state.

Some states invest more from their own resources to add nutrition to their mid-day meals. For instance, Andhra Pradesh provides eggs or bananas twice a week. Kerala too provides eggs/banana once a week along with 150 ml milk twice a week. Maharashtra provides “Sneh-bhojan” or special sweet treats on birthdays of prominent people. Mizoram encourages schools to grow their own vegetables and have their own kitchen gardens.

According to the Comprehensive National Nutrition Survey (2018) amongst school going children between the age (5 to 9 years old), 22 per cent are stunted and 35 per cent are underweight. In 2004 the Ministry of Human Resource Development came forward with guidelines that state the adequate nutrition to be provided to the students. The below-mentioned nutrition plan is implemented in mid-day meals.

Impact of Lockdown on Mid-Day Meals

As the pandemic halted several people from earning, many vulnerable communities saw a sharp decline in their food consumption. 74 per cent of Dalit families and 54 per cent of Adivasis ate fewer amounts of food. This prompted many state governments and UT Administrations to provide food grains, pulses, and oil to all students under the Food Security Allowance (FSA). Yet, most affected by the pandemic was the government’s decision to provide free nutritious breakfasts.

As part of its National Education Policy (NEP), the Parliamentary Standing Committee on Education, recommended to introduce a healthy breakfast during the academic year 2020. The budget allocated for this scheme was ₹4,000 crore. But given the circumstances of the pandemic, the government had been providing dry ration or cash allowance instead of the mid-day meals to students. This scheme ran through the summer holidays, creating more budget strain on the government. It enforced a cut back of 8 per cent on the budget for the School Education Department from ₹59,845 crore to ₹54,873 crore for the year 2020–2021. The mid-day meal too saw its initial budget go from ₹12,900 crore to ₹11,500 crore 2021–2022, which is insufficient to introduce the new plan of breakfasts.

According to the Global Nutrition Report of 2018, out of the 150.8 million stunted children in the world, 46.6 million are Indians and 25.5 million are wasted children (higher risk of dying). 13 Indian states and UTs have reported a surge in the percentage of stunted children, 16 states have seen a rise in the number of underweight children, and 12 states have reported wasted children under the age of 5. The Food and Agriculture Organization reports that our country is home to 194.4 million undernourished children.

India is the world’s largest exporter of agricultural produce, yet millions in India perish because of not having a good meal. The Global Burden of Disease Study found that malnutrition was the biggest cause of deaths and disability in our country. The budget allocated for mid-day meals should not be slashed on the contrary strides should be made to enlarge it and make India a nation where no child is left without a nutritious meal.