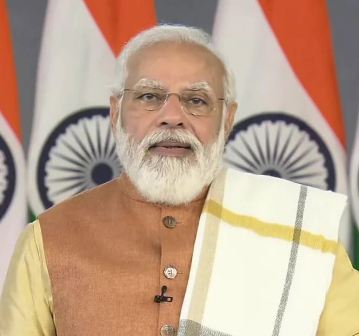 video conferencing today.  Today, being the birth anniversary of Swami Vivekananda is observed as National Youth Day.  During the event, the Prime Minister unveiled selected essays on “Mere Sapno ka Bharat” and “Unsung Heroes of Indian Freedom Movement”. These essays have been selected from submissions by over 1 lakh youth on the two themes. The Prime Minister also inaugurated a Technology Centre of the MSME Ministry, established at Puducherry with an investment of about Rs. 122 crore. The Prime Minister also inaugurated the Perunthalaivar Kamarajar Manimandapam – an auditorium with an open-air theatre, constructed by the Government of Puducherry at a cost of about Rs 23 crores. Union Ministers Shri Anurag Singh Thakur, Shri Narayan Rane, Shri Bhanu Pratap Singh Verma and Shri Nisith Pramanik, Dr Tamilisai Soundararajan Chief Minister of Puducherry Shri N. Rangaswamy, State Ministers and Parliamentarians were among those present on the occasion.

Commenting on the young profile of the ancient country, the Prime Minister said today, the world looks at India with hope and faith. Because, India’s demography is young, and the mind of India is also young. There is youth in India’s potential, and in its dreams. India is young in its thoughts as well as in its consciousness. India’s thinking and philosophies have always accepted change and there is modernity in its antiquity, he said. The Prime Minister said that the youth of the country have always come forward in times of need. Whenever the national consciousness gets divided, youth like Shankar come and stitch the country in the thread of unity as Aadi Shankracharya. In times of tyranny, sacrifices of youth like the Sahibjaade of Guru Gobind Singh Ji guide us even today. When India needed sacrifice for its freedom, young revolutionaries like Bhagat Singh, Chandrashekhar Azad and Netaji Subhas came forward to dedicate their lives to the country. Whenever the country needs spiritual regeneration, sages like Aurobindo and Subramnayan Bharathi come to the scene,  the Prime Minister added.

The Prime Minister lauded that today, India’s youths are writing the code of global prosperity. The Indian youth is a force to be reckoned with in the unicorn ecosystem all over the world. India today has a strong ecosystem of over 50,000 startups. Out of which, more than 10 thousand startups came up amidst the challenge of the Pandemic.   The Prime Minister gave the mantra of New India – Compete and Conquer. That is, get involved and win. Unite and win the battle. The Prime Minister cited the performance in Olympics and Paralympics and participation of youth in the vaccination drive as proof of will to win and a sense of responsibility among the youth.

The Prime Minister noted that the Government believes that sons and daughters are equal. With this thinking, the government has decided to raise the age of marriage to 21 years for the betterment of daughters. Daughters can also make their career, they get more time, this is a very important step in this direction, he remarked.

The Prime Minister said we have had many such fighters in the freedom struggle, whose contribution did not get the recognition that they deserved. The more our youth write, research about such dignitaries, the more awareness will increase in the coming generations of the country, he added. He also called upon the youth to be vocal and contribute in the drive for cleanliness.

The National Youth Festival aims to shape the minds of India’s youth and transform them into a united force for nation-building. It is one of the biggest exercises in social cohesion and intellectual & cultural integration. It aims to bring diverse cultures of India and integrate them into a united thread of ‘Ek Bharat, Shreshtha Bharat’.