QUAD and the War on South China Sea

As the Indian Navy performs a 3-day drill with the Naval forces of US, France, Australia, and Japan (QUAD), we look at the benefits and risks of India challenging China’s claim on the South China Sea.

World’s busiest waterway, the South China Sea, stretches for 3.6 million sq. km and is an area contested and disputed over by countries that surround it, namely China, Vietnam, the Philippines, Taiwan, 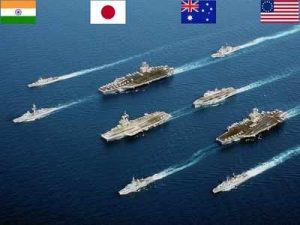 Malaysia, and Brunei. The dispute lies in claiming sovereignty over the sea, but mainly over its rich resources. An estimate claims that there lie 11 billion barrels of oil and 190 trillion cubic feet of natural gas buried in the sea’s depth. It is a commercially important water route as it connects Asia with Europe and Africa, letting international trade worth US $3.37 trillion pass. The dispute over the tides started after World War II, when no country had laid claim over any island in the South China Sea. After the discovery of oil from its depths in the 1970s, many countries started claiming parts of the body. In 1974, The Battle of Paracel Islands was fought by China and South Vietnam, resulting in the former’s victory.

The 1982, United Nations Convention on the Law of the Sea formalized 12 nautical miles (22 km) from a country’s shore as their territory and 200 nautical miles (370 km) as their exclusive economic zone (EEZ). A “nine-dash” line was introduced in 1947 by the Nationalist Government of China, claiming sovereignty on the sea extending 2000 km from mainland China. This is over half of the entire South China Sea and skirts with the territorial waters of many other countries. Many note that the claim has no basis in international law.

China has since then performed calculated invasions on many islands along with militarizing them. Many satellite images testify China’s expansion efforts as it has gained 3200 acres of new land by increasing island sizes by either piling sand to existing reefs or by creating new islands altogether.

It has added military installments to Paracel and Spratly islands, 20 and 7 outposts respectively, and sent fighter jets and cruise missiles to Woody islands.

In 2002, the Declaration on the Conduct of Parties in the South China Sea was signed by the Association of Southeast Asian Nations (ASEAN) and China, to “exercise self-restraint in the conduct of activities that would complicate or escalate disputes and affect peace and stability.” Yet, the waters of the South China Sea are still disputed and Brunei, Malaysia, Philippines, Taiwan, and Vietnam still contest China’s claim to the waters.

The Quadrilateral Security Dialogue or QUAD was formed in 2004 with 4 countries—India, the USA, Japan, and Australia—to help the victims of the Boxing Day tsunami. The nature of QUAD is neither of a multinational organization nor a military alliance. But there’s a common apprehension over China’s rise and its expansionism. This revived the stagnant group in 2017 and it went from a strategic forum at the official level to a ministerial level.

An alliance of democratic countries or the formation of a “Democratic Security Diamond” was insisted by Japan’s PM Shinzo Abe. India being under the Congress Party rule back then didn’t budge from its “non-aligned” stance and failed to show more interest. Australia under Kevin Rudd denied to cut ties with China over maintaining economic ties with it. The USA, under Obama, also didn’t wish to cut favors with China, especially due to the financial crisis.

But the situation changed under the Trump administration, and the USA openly supported Abe’s decision as it tried to contain China’s climb to superpower. India and Australia too are now under conservation governments who have taken tough decisions against China. These circumstances have favored the QUAD into taking an active role in recent years by naval and strategic cooperation.

India signed the Agreement on Reciprocal Provision of Supplies and Services, which would help strengthen defense cooperation between Indian Armed forces and Self-Defense Forces of Japan in the Indo-Pacific region or the South China Sea. Similarly, India has signed a mutual logistics agreement for military operations with Australia and the Basic Exchange and Military Agreement (BECA) with the USA.

The USA has also contested China’s claim on the water territories and conducted frequent Freedom of Navigation Operations (FONOPs), which is innocent passage through another state’s waters. Japan too has tried to control China’s aggressiveness by selling military ships and equipment to the Philippines and Vietnam.

In November 2020, the QUAD held their biggest naval drill with warships, submarines, and aircrafts in the Indian Ocean. China obviously condemned the Malabar exercises and labeled the QUAD “the Asian NATO.” This month, QUAD + France started their 3-day long naval war game in the east of the Indian Ocean. The Indian Navy and aircrafts performed the drill with the United States Navy, French Navy, Royal Australian Navy, and Japan Maritime Self Defense Force.

With the Nehruvian principle of “non-alignment,” India has historically resisted military alliances and being a part of the bloc. But since April 2020, India and China have seen issues along their western and eastern Himalayan borders, namely in Ladakh and Arunachal. India has also factored the aid and supported other QUAD members would provide for the issues faced on the Line of Actual Control (LAC). At the same time, it needs to maintain the alliance with QUAD as it is beneficial for India.

India can no longer get support from BRICS in the erstwhile border tensions with China and has been labeled as a “negative asset” for BRICS and SCO by China. We also cannot rely on SAARC as Pakistan is one of its members. This makes the QUAD a sturdy support group with key members like the USA, Japan, and Australia.

The naval might of the USA and Japan too are important elements for India’s own naval strengthening.

The QUAD, along with keeping China’s expansionism in check, has also pledged to work together to curb climate change and share knowledge on critical technologies, including 5G. During the pandemic, the QUAD came together in developing vaccines. It used the strengths of each nation to quickly produce vaccines amidst a world crisis. The USA gave its world-renowned R&D, while Japan, the world’s largest source of Official Development Assistance (ODA), gave financial assistance. India, the producer of 3/5ths of the world’s various vaccines, mass-produced 1 billion COVID-19 vaccines by the end of 2020. Australia gave its logistical support.

Here, India needs to weigh how far it will go to protect the interests of the South China Sea. In reality, India’s actual interests lie in the Indian Ocean and the disputes of the South China Sea are not the top priority. With this clarity, India needs to assess how much risk it will take to go against China. Taking a stand against China will come at its own price. When Australia demanded an investigation against the origins of Coronavirus in China, the latter slashed beef imports from Australia. It also added tariffs on imports of barley (80%) and wine (200%). The economies of the USA, Japan, and Australia would not be as affected as India, which would have to deal with the “heavy lifting.”

Indians are Now Breathing More Plastic Than Ever