The Modi Government’s surprise move needs to be analysed. Irrespective of its effectiveness in the poll, would it benefit the targeted group in reality and help fight unemployment? 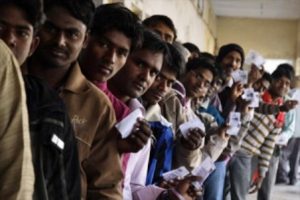 With the constitutional amendment for reservation for poor among forward communities of India in the form of the Quota Bill, the hornet’s nest has once again been opened. The debate is on the merit of providing quota of 10 per cent for upper castes as they are dominant in the competition. So, why would they need a separate quota based on economic criterion? This is the question being asked by anti-reservation groups across India.

Peculiarly, Dalit leaders like Mayawati are lending a supportive hand in the issue while pointing out that it seems like an election stunt or “political jumla”. However, strong bases of reservations, in particularly, DMK and VCK of Tamil Nadu have condemned the new reservation effort.

Many political parties allege that unemployment has, in fact increased. They cite Demonetisation and GST regime as the contributors to the decline in the employment situation and term the current growth trend as ‘Jobless Growth’.

The demographic figures show that the country has a huge youth population. Since the supply overtakes demand, unemployment has risen sharply. With the dominance of the younger population, the problem becomes acute.
In this background, the Modi Government’s surprise move needs to be analysed. Irrespective of its effectiveness in the poll, would it benefit the targeted group in reality?

Also read: BJP and the politics of megalomania

There are no definitive answers as there is a lot of speculation. Look at how the OBC reservation brought several promises but has not been effectively addressed in respect of several placements in government departments which have not been filled due to non-availability of suitable persons. Further, their income criterion for the poor among the forward communities is marked as Rs 8 lakh per annum. In contrast, the income tax is levied on persons earning more than Rs 2.5 lakhs per annum!

“Back in 2017, Vice President Venkaiah Naidu mentioned about how India has a working age group which is a challenge as well as an opportunity.”

The Vice President while addressing the 2017 Entrepreneurs’ Organisation Global University conference said, “India is one of the youngest nations in the world with around 62 per cent of its population in the working age group of 15-59 years and nearly 54 per cent of its total population below 25 years of age. This poses a formidable challenge and a huge opportunity.”

This demographic dividend has been continuously portrayed as an advantage by the political as well as executive class for the past two decades. But the benefits are still under scrutiny considering there are no massive employment programmes being implemented.

How to resolve the issue? In Tamil Nadu, there are 12 lakh state government employees. Recently, opposition parties said that more than 80 lakh youth are unemployed in the state. Increasing placements correspondingly increases the cost when it comes to employment in government jobs in states. Already the state of Tamil Nadu has a huge debt burden.

Over a period of time, the state had to decentralise its powers to local bodies. If the bodies are to retain their power to deliver as many government services to the public, the workforce needs to be expanded. In addition, the state could introduce jobs for all eligible youth considering their education and their social background could provide jobs for a limited period in services like the armed forces.

One eligible youth shall get 15 years’ term or so in a government job in his/her life time. The cost of living in rural regions is not at par with the cities. Hence, the cost for employing huge workforce won’t hurt the exchequer.

Implementation of such a scheme would not be an arduous task since there is availability of technology for a data base on youth graduates such as through Aadhaar.

“The government should be willing to constitute rules and regulations and necessary guidelines to implement such a scheme. Several state government departments need eligible staff without incurring huge expenditure. Moreover, they will be more effective after decentralisation.”

The state at every opportunity has struck down any interference of the Central Government in state’s rights. By showing a way forward through decentralisation, it can gain a moral authority to raise a voice against the centre’s attitude. This becomes an additional advantage.

Uzbekistan: A Flagbearer of Regional Cooperation in Central Asia