To avoid the horrors of reverse migration that India is witnessing yet again, the government should have included migrant workers in COVID redevelopment policies and prioritized their vaccination. 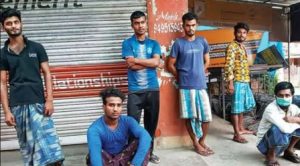 from their urban dwellings, yet again. Ever since the Maharashtra government announced a lockdown 2 weeks ago, visuals of overloaded trains and buses began to pour in. This followed in every state and union territory that announced a temporary lockdown, including Delhi, Rajasthan, Karnataka, etc. The visuals are dishearteningly similar to those witnessed last year when millions of migrants traveled to their homes on foot after a nationwide lockdown was imposed in March 2020.

This time, even with 3.5 lakh cases being reported daily, a national lockdown has not been announced; several state governments have come up with their own lockdowns. And so, the trend of reverse migration has resurfaced. Challenges and solutions to ‘Reverse Migration amid Coronavirus’ Second Wave’ were discussed in a web policy talk organized by the Impact and Policy Research Institute (IMPRI), featuring Professor Arun Kumar, Professor Irudayan Rajan, Akriti Bhatia, and Tikender Singh Panwar.

The second wave of the pandemic comes only 3 months after India began its vaccination drive. As of April 27, India has vaccinated over 14 crore citizens. Former Deputy Mayor of Shimla and IMPRI Visiting Fellow Mr Panwar felt that this year’s reverse migration could have been avoided if laborers were given priority vaccine. Other panelists, including Mr Rajan, Chairman, International Institute of Migration and Development, agreed.

“Migrants who walked home last year were labeled as ‘virus carriers.’ For this reason, the government asked them not to move and made them immobile. The migrant workers have now returned to the cities, especially since the virus died down in the last 3-4 months. They now perform our most essential services, including home deliveries,” Mr Rajan said, adding that if vaccination was provided to the migrants, they would not have to return home due to the fear of the virus. States like Tamil Nadu have agreed to prioritize migrant worker vaccination in the third phase of the drive starting May 1, which allows those between 18-45 years to be vaccinated.

Mr Panwar further stressed the need to reconfigure the planning of urban cities, which harbors inhuman aspects and alienates the underprivileged.

Panelists from IMPRI also discussed the policies that were put in place by the central government last year to improve the workers’ living conditions. “Several migrants died last year due to starvation and lack of basic facilities. The dire situation pushed the government to kick-start policies such as the Pradhan Mantri Gareeb Kalyan Yojana Scheme, in which migrant workers were provided with 5 kg rice and 1 kg pulses on a monthly basis. The government also introduced the One Nation–One Ration Card scheme, which would allow migrant workers to buy subsidized ration from anywhere in the country,” IMPRI’s Ritika said. However, the latter is yet to see full implementation. “Wages under MNREGA were also increased, and street vendors and women workers were provided direct cash transfers of small amounts under different schemes,” she added.

Panelists also said that in order to avoid such grave instances of mass reverse migration, there should be a database of workers. While the government has already kick-started the same under “All India Survey of Migrant Workers” and “All India Quarterly Establishment Based Survey,” the data is not available for public access. Citing some improvements in comparison to the condition last year, Ms Ritika said, “A Draft National Policy for Migrant Workers 2021 has been announced. During the Union Budget 2021–2022, Finance Minister Nirmala Sitharaman also announced the creation of a portal of gig building and construction workers. 20 control rooms have also been set up to address the grievance of migrant workers, and the PMGKY has been revived for May–June 2021.”

It was also opined that guaranteeing dignified food and nutrition security is essential, as many migrant workers belong to the informal sector.

The virus affects migrant workers’ loss of lives and livelihoods. An entire class of people was forced to move back to their hometowns last year because they did not have enough savings to survive even a week on. Mr Ranjan further suggested direct cash transfers to assist the workers. “The government should think of transferring NREGA wage of INR 200 per day for at least 3 months. They should be provided with a minimum of INR 5000–6000,” he said.

Former Economics faculty at JNU and renowned economist Professor Arun Kumar discussed India’s historically poor rural funding policies, which over the last 50 decades, has pushed more and more rural dwellers into urban jobs. Migration has been taking place since independence, primarily because of top-down, urban-centric approach of policy making. We were enamored by western modernity and we wanted to industrialize in towns and urban areas. This left very little resources for rural areas,” he said.

He further cited 5 reasons behind the marginalization of rural India: marketization, technology, black economy, shocks to unorganized sectors, and weak social situation, which, altogether, have kept rural India as a secondary priority. “India needs to reformulate its funding policies with a bottom-up approach to avoid such horrors,” he said.