The thrust of the draft migration policy is to facilitate migration, which is a welcome move, but if that benefit is then counterbalanced by an effect which is relatively negative, then the overall welfare impact on the society over time becomes problematic.

India’s NITI Aayog has prepared a Draft Migration Policy. The draft policy acknowledges migration as an integral part of development, and it calls for positive government interventions that facilitate internal 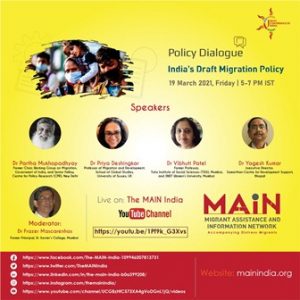 migration. With a rights-based solution to migration, the draft states that the policy should “enhance the agency and capability of the community and thereby remove aspects that come in the way of an individual’s own natural ability to thrive”. Although the draft has reference to architecture of social protection, there is much to be desired from a human rights and social justice perspective. In this context, the Migrant Assistance and Information Network (MAIN), working with distress migrants across 14 states of India, conducted a Policy Dialogue on “India’s Draft Migration Policy” on 19 March 2021. A galaxy of policy experts from India and abroad explored the contours of the draft migration policy and suggested the needed key elements for the policy on migration in the Indian context.

Dr. Partha Mukhopadhyay, Former Chair, Working Group on Migration, Government of India and Senior Fellow, Centre for Policy Research (CPR), New Delhi, said “Migration is not about migrants alone though they are obviously the visible aspect of migration, as it was evident during the COVID”. Migrant is embedded both in the source and destination states. In India, migrants do not always move with family, which results in a phenomenon called “left-behind” that has been studied extensively in China, but not given much attention in India. The children left behind in villages lose out in education, when one of either of the parents migrates to the city. Early childhood education is an important part in determining one’s life’s outcome. The thrust of the draft migration policy is to facilitate migration, which is a welcome move, but if that benefit is then counterbalanced by an effect which is relatively negative, then the overall welfare impact on the society over time, not just only in this generation, but also next generation then it becomes problematic.

Dr. Mukhopadhyay gave an example of this aspect quoting Census data, which often records women moving along with families for reasons of marriage, giving the impression that women are not part of the workforce. However, when we triangulate it with other data, especially the National Sample Survey ( NSS), it is found that women’s workforce participation is higher than that of women who have not migrated, which means women who are recorded as migrating for non-work purpose are actually working in the destinations. “Migration is an activity, and not an act, which is a continuous process of movement from the village to city and this gives rise to multi locational households, providing a certain degree of insurance against uncertain agricultural outcomes”.

Domicile restrictions for employment are increasingly brought out by states, not only in the public sector, but also in private sector.

Although courts have intervened, many states, including Haryana for instance, recently have brought such laws. Equality in legal protection for everyone is required to make migrant to be at par with everyone. This is something to worry about migration policy. He further added, if the migration policy is about special favours for migrants, then it creates a certain degree of resentment among the people who are locals.

Dr. Vibhuti Patel, former professor, Tata Institute of Social Sciences (TISS), Mumbai, and SNDT Women’s University, Mumbai said, the question of intersectionality is important while we discuss migration. Wherever women go, they work. Recognition and representation of women is critical in migrant discourse.  Dr Patel raised the concern of sexual harassment of women migrant workers. According to ILO, 92 per cent of women workers in India are in informal sector, devoid of any platform for grievance reddressal. There are no support mechanism for migrant women workers, especially absence creches and childcare facility. Labour laws have been abandoned by many states. Overall precarity in the labour market resulting from the intersectionality of class, caste, religion, language, etc., imposed over each other need to be addressed. Speaking on the labour codes, Dr Patel said that there are gross violations of human rights in the work place and the whole course of reproductive discourse is not even mentioned in any of the code. Dedicated helpline for migrant workers which can address all issues of  migrants, including wage theft, social protection, etc. It is also important to ensure the reproductive rights of women too. Registration of women as migrant workers so that they get access to schemes and programmes, etc. Implementation of Equal Remuneration Act 1976 and skill upgradation are important.

Dr. Priya Deshingkar, Professor of Migration and Development, School of Global Studies, University of Sussex, UK, said, though the Draft Policy is not available for public, it is the time to intervene to influence how the policy gets shaped up. The draft demonstrates political will and clearly states the government’s intent to recognise the economic contribution of labour migrants and support them. It highlights the importance of collective action to improve bargaining power of workers. Further, it has several radical steps such as a unifying a national policy, migration management bodies in sending and receiving states, establishing a unit within the ministry of labour and employment to foster convergence among different line departments.

Dr. Deshingkar said, the remit of the policy is broad, seeking to bring even the most marginalised groups such as street vendors, sex workers, etc. under its umbrella. However, a more explicit mention of important, but less visible categories of work such as domestic work and home-based work, which are particularly important for women, is needed. Home-based work means the kind of work done by migrant workers in some type of home setting, informal establishment, may be part of manufacturing chain. These workers tend to be invisible. She added, it is too easy for them to fall through the gaps as they are not adequately covered by protective law. For example, India has still not ratified the ILO Convention on Domestic Workers. She further said, we really need a more innovative approach to improve the effectiveness and coverage of existing laws and this can be achieved through consultation with stakeholders who are closer to migrants and work with them directly to pinpoint precise processes of exclusion. Dr Deshingkar said that it is important to understand the political economy of migrant labour recruitment, placement and employment in key industries, and why there is a vested interest in keeping migrant workers away from the purview of law. The draft policy begins by stating that migrant policy should be recognised, but it is not reflected in the section of tribal migration. Further, cases of extreme exploitation are used as justification to stop all tribal migration, which are against the broader experience. There is a need to differentiate between instances of extreme exploitation and find ways of mitigating  that rather than policing migration and viewing in negative terms.

With regard to the setting up of database of migrant workers, the requirement of identity proof and enrolling through a formal process with paper work and all is likely to run into the problem of exclusion. The draft policy is a major step in the right direction, but the gaps need to be addressed. 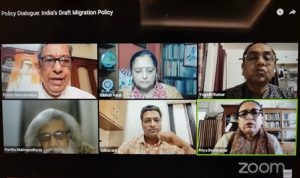 the rights, entitlements and dignity of migrant workers have to be protected. The invisible constituency, which is so productive in work, has to be considered as equal participants in the economy. Local governments were the only government closer to the people closer to the people during the lockdown. Local leadership emerged through the crisis, by proving a host of critical services, right from ration, medical facilities, and quarantine facilities. Hence, it is important to recognize the role of local governments. The three tier structure provided by the Constitution under the 73rd and 74th amendments—rural, block and district panchayat levels – provides a comprehensive legal framework for the migrants in the destination and source. Similarly, in the case of the urban areas, municipalities, corporations and nagar panchayats provide another legal entity as local government. Hence, these connections have to be seen when we discuss migrants in source and destination states. These two local governments have to talk to each other to see how migrants are protected. Dr. Kumar said there should be National Rural Migrants’ Inventory (NARMI) by Gram Panchayats at source and by the Municipalities at destination. Comprehensive migrant-centric district planning by the working together of Gram Panchayats and urban local bodies is required to enhance employment opportunities.

District centres have poor infrastructure and it would be difficult to convert them into migrant inventory level. It has to be much simpler where the incentives have to be there for the migrants to register, whether they are migrating alone or with families. He further said, one nation and one ration is only possible when we have a database at the panchayat and municipal level of all migrants who are moving from place to place. The real-time data of migrants is required only when large number of seasonal migrants exist. The registration should not be coerced. It should be incentive based. There should be a national flagship programme for establishing migrant resource centres (MRCs).

The Policy Dialogue was moderated by Dr. Frazer Mascarenhas, Former Principal of St. Xavier’s College, Mumbai, and Former Member, Working Group for Undergraduate Education of the National Knowledge Commission, and the Steering Committee for Higher and Technical Education of the 12th Plan of the Planning Commission, Government of India. Dr Siji Chacko, Director, MAIN, briefed about MAIN and the activities of the network. Participants from across the world representing policy research and academic institutions, government, civil society organisations, students, etc. attended the programme.

The Burden of Brexit