Tharoor’s The Battle of Belonging Released 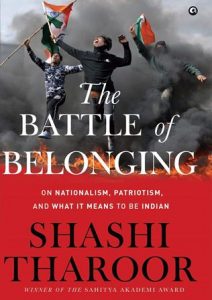 The online event, organised by Prabha Khaitan Foundation in association with Aleph Book Company, was flagged off by Ms Apra Kuchhal of Ehsaas Women and moderated by journalist Karan Thapar. Guests from the country and abroad joined in at the web event for a stimulating discussion and critical appraisal of Shashi Tharoor’s 22nd book, which delves into current social, political and cultural issues confronting India.

It was stated that Tharoor’s latest book hasthe potential to trigger serious debate on many issues pertaining to India,as it did not shy away from contesting some of the core concepts like nationalism, patriotism, civic nationalism, the idea of India and others elaborated therein.

Mr Hamid Ansari opened up the lively discussions saying, “This is a passionate plea for an idea of India that was taken for granted and is now seemingly endangered by ideologies that seek to segment it on imagined criteria of us and them. Shashi Tharoor has dilated on the essential ingredients of Indianness as understood in the freedom struggle and in the subsequent seven decades of the Republic of India. I found the essays on identity and patriotism particularly enlightening. The book’s analysis is comprehensive, yet it stops short of suggesting a doable recipe for correcting the shortfalls.”

David Davidar of Aleph Book Company, publisher of the book, said, “I hope every Indian will read the book. It is a remarkably learned, even-handed and lucid study of foundational ideas and concepts and national values. This book falls in the rarest-of-rare `Indispensable’ category – books you cannot do without. I hope people will be reading and discussing “The Battle of Belonging” fifty years from now.”

Describing the reasons for penning this book, Shashi Tharoor said, “This book is the culmination of a lifetime’s thoughts, readings and arguments on issues of nationalism and patriotism which are not just theoretical or academic but intensely personal too. The book was prompted by the rise of a fundamental challenge to the very essence of Indian nationalism. The book offers one observer’s note towards an understanding of nationalism in the world against specificity in India today. India’s own anti-colonial nationalism converted itself into a `civic nationalism’ encoded in a democratic Constitution and then the conflict over contemporary attempts to convert that into a religious-cultural nationalism. That is the battle of belonging to India and having India belong to you. Those are the principal themes in the book.”

The author feels the nationalism being promoted in India today is a totalising vision that excludes citizens, those who do not subscribe to it, on the basis of identity or immutable markers like ethnicity, religion, language and so on.

In contrast, civic nationalism, he thinks, is anchored in institutions and constitutions. Civic nationalism derives from the consent of citizens to participate in a free and democratic society and best safeguards individual rights and hence must be promoted and protected above all.

Some of the live panellists at Kitab did not agree with this distinction with Pavan K Varma calling it an “intellectual quibble”.

Responding to a question from Karan Thapar, Farooque Abdullah said, “Today we are being divided on religion, caste, creed and language. Are we making a strong India or killing the very essence of it! Shashi has done a great job writing this book. I must tell you one thing; tyrants may come and go but nations continue to survive. We have to fight against forces that divide us on the basis of religion, caste creed and language.”

Paranjape Marakand, poet and novelist, disagreeing with the author on many topics, said, “The idea of India is highly and hotly contested today and the Nehruvian consensus with which many of us grew up has now probably crumbled to dust. This is one of Shashi’s books and should open up serious debates, but I don’t think India is a country which practices `civic nationalism’. I think ours is `civilisational nationalism’ and is always plural. Shashi has considered Indian Constitution almost like a sacred text which cannot be changed. But it has been changed 103 times. The 42nd Amendment, pushed through during the Emergency, Sovereign Democratic Republic of India suddenly became a Socialist and Secular in addition. Who believes in common property? We are not socialists. We are living a lie, a hypocrisy. Let us not kid ourselves as all our politics are based on caste calculations, linguistic calculus, religion and caste.”

Pavan K Varma called it an important book in which Shashi has invested his cerebral energy to project and propagates a point of view which is very relevant.

On a dissenting note, Mr Varma said, “All religious extremes are bad, including Islamic fundamentalism, which I notice you don’t speak about in your book at all.

Also Read : Coordination: The Need of the Hour in the COVID-19 Pandemic

And if there are sanctuaries for it in any parts of India, I think, they should equally be the focus of your attack so that the book does not appear to be one-sided. I really cannot understand what is a `civic nationalism’ for a country which goes back to the dawn of time and whose civilisational legacy is something we find very difficult to ignore and contributed to any idea of India that we may have recently formed. Why do we need to devise this sanitised notion called civil nationalism, which privileges a recent Constitution as it should be but posits it against any unwarranted cultural infusions as though that was the intention of the constitution makers?”

Pavan K Varma highlighted the distortions of secularism in practice in India and the backlash. He said, “There are many Indians today who are taking elements of what constitutes the idea of India and examining them again by questioning – Why did Mahatma Gandhi support the Khilafat Movement? Why did Nehru write to Dr Rajendra Prasad not to attend the inauguration of the renovated Somnath temple? Why were personal laws of only Hindus changed? Why was the Shah Bano case judgement overruled by an ordinance? These are questions we are familiar with. We are not excavating the past for creating present day acrimony. For a long time, these questions were never raised and so the idea of India remained uncontested. They are being raised now and we need to answer them. Mahatma Gandhi’s intentions were always good, but we need to see what its consequences were.”

Kitab is a signature event of Prabha Khaitan Foundation of Kolkata conceptualised by Mr Sundeep Bhutoria, which provides a forum for writers, poets, intellectuals and thinkers to launch their books and share their thoughts and views on varied topics leading to thought-provoking and stimulating intellectual discourses and discussions.