The Burden of Brexit

The Brexit deal would force Britain to pay £25 billion to Europe by 2057, while it observes a steep decline in its GDP, Pound sterling’s value, and household income.

Brexit or “British exit”  is the term used for the UK’s decision to vote out of the European Union, the economic and trade bloc of which the UK was a member since 1973. The UK officially left the EU on 31st January 2020 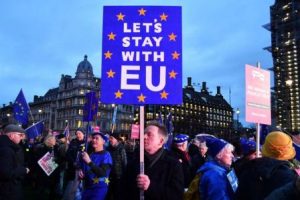 but remained a part of it till 31st December of the same year. Both sides agreed to the extension until the agreement on the new trade deal. On 1st January 2021, the new Trade and Cooperation Agreement was signed that covered trade, cooperation, and governance but left out foreign policy and defence. 17.4 million UK citizens voted to leave the trading bloc in 2016, while 16.1 million voted to remain with the UK’s nearest and biggest trading partner. Many who favoured Brexit are working-class English countryside residents. A huge push for being pro-Brexit was created by the fear of immigrants, losing jobs to migrants, and the frustration small businesses faced by EU fees. The majority who voted to stay in the EU were residents of London, Scotland, and Northern Ireland. Their prime reasons to stay were free trade with the EU and the availability of a young and able workforce from the bloc.

As a “divorce settlement,” the UK would have to pay Europe £25 billion by 2057. The UK’s Northern Ireland and the Republic of Ireland will face severe tensions along its borders with the establishment of checks and entry posts. By leaving the EU, British citizens without a visa would no longer be able to stay for more than 90 days (in a 180-dayperiod) in Europe. The UK has already suffered several damages from stepping out of the EU, most notable are in the following sectors:

Also Read : Universal Basic Income and Its Application in India

An estimation suggests that the UK will experience a 9.5 per cent loss of GDP. For comparison, the financial crisis of 2007-2008 resulted in a loss of 7 per cent GDP. In the best-case scenario, the GDP will increase by 1.6 per cent or diminish by 2.2 per cent by 2030. The UK is far more dependent on the EU to maintain its GDP than the other way around. The UK derives 12.6 per cent of its GDP by exporting to the EU;while on the contrary, the 27 members of the EU receive 3.1 per cent of their GDP via trading to the UK.

One of the reasons why 17.4 million people voted to leave the EU was for access to better jobs. It is estimated that by 2030, Germany will face a shortage of 3 million skilled workers but since Brexit, many young British workers will not be able to work there. The UK, being a service-based industry,80 per cent of its economy is based on this sector, exports its majority (36 per cent) to the EU. Further, there could be a loss of 3.1 per cent income or a loss of £4,300 per household.

Ironically, instead of getting better employment opportunities, the UK is witnessing a severe shortage of workers. The low-skilled and medium-skilled jobs are the most affected by Brexit as almost 97 per cent of the EU-born workers left in 2017. Many international corporations are switching their base from London to EU territories. Barclays moved 5000 of its clients to its Irish subsidiary while Bank of America shifted 100 bankers in its Dublin office and another 400 broker-dealer unit in France. Goldman Sachs, JP Morgan, and Morgan Stanley too have switched 10 per cent of their clients.

By voting out of the EU, the UK can no longer benefit from the trade agreements the EU had in place which covered 70 countries. The UK would have to set and negotiate its own trade policies with numerous countries. Talks with the US, Australia, and New Zealand are currently being held. For the UK to have access to the EU’s Single Market, they would have to sign something similar to the EU-Canada’s Comprehensive Economic and Trade Agreement (CETA). But even after signing this, Britain will experience a 6.2 per cent smaller GDP in 2031 and an annual loss of £36 billion in tax receipts, according to the UK Treasury.

Brexit threatens the higher education sector of Britain. There would be a loss of research funding coming from the EU along with a diminished number of students from the EU and the UK students going abroad for their education. Europe’s most prestigious Erasmus+ programmes now list Britain as a non-EU country. The scheme used to help 17,000 British students to study abroad, and at the same time contribute £243 million every year to the UK economy. In response to the Erasmus+ programme, the UK government has launched the Turing scheme. Named after the mathematician Alan Turing, it plans to help 35,000 UK students to study globally.

As the US and China compete for world domination with countries like India and Brazil growing in stature, the UK will lose its importance on a global front. With the EU, the UK could leverage the world’s biggest market to ensure and safeguard its own interests. By quitting the EU, it will have less say in global affairs ranging from country disputes to climate change.

India is the top investor for the UK, investing more in it than the rest of Europe combined. Similarly, the UK plays the third-largest role in lending Foreign Direct Investment (FDI) to Indian companies. With more than 800 Indian-owned companies functioning in the UK, all would have to adjust their function according to the new rules. But the most significant damage would be India’s weakened ties with the EU as the Prime Minister had noted in 2015, “As far as India is concerned, if there is an entry point for us to the EU, which is the UK.”

Since many Indian companies are listed on the London Stock Exchange, Brexit will impact it negatively. With the fall of value in the Pound sterling, exports from India will suffer some loss. On the contrary, imports from the UK will see a profit. Because of the Pound’s lower value, many companies can buy higher technologies from the UK. With Britain free for negotiations, its trade relation with India could improve. Many Indians can now eye the UK for both education and employment.

It is quite clear that no alternative solution is more advantageous to Britain than staying with the EU. With Brexit, the UK will face grievous economic and political consequences. From losing GDP to diminished global reputation, the UK will witness dire effects along with the negative impact of the pandemic. But Brexit in its essence is a vote against globalization. Many European countries are gripped by the fear of immigrants, particularly the UK, France and Germany. If all these countries vote out of the EU, the world’s biggest market and coalition bloc would lose its prime members with robust economies, shattering the whole European Union. The ripples of this damage will affect every country, including India.

Same-Sex Marriages in India: The Need for Its Legalization