The Rise and Shine of Baluchar Textiles

Whether preserving the traditional pattern or keeping pace with the contemporary demand, Baluchar has journeyed a long way through Murshidabad, Bishnupur and Benaras.

Baluchari, named after the town of its origin Balucharin Murshidabad, refers to the traditional hand weaving of silk sarees with broached designs believed to have been started by the first Nawab of Bengal, Murshid Quli Khan. The craft tradition later shifted to Bishnupur in West Bengal, retaining its original name. Earlier known as Mallabhum, Bishnupur rose to prominence under the reign of Malla ruler Bir Hambir in sixteenth century, who was initially a Shiva worshiper, but later got converted into Vaishnavism, and Bishnupur became a strong Vaishnava centre. The patronisation of ruling kings of Bishnupur, especially Bir Hambir, and subsequent rulers helped Bishnupur evolve into a cultural centre with art, architecture, craft and music flourishing at the same time being greatly influenced by the growing Vaishnavism.

The profusion of temple building activities in Bishnupur have been substantiated in British administrative records from mid-18th century. The exquisite terracotta panels in the temples adds to the architectural beauty. The terracotta panels bordered heavily with small figurines mostly depict Krishna leela, ten incarnations of Vishnu among other themes. 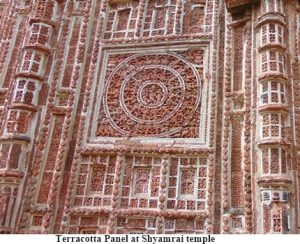 These terracotta temple panels inspired the designs woven in the Baluchari Sarees too. With the patronage of the kings the Baluchari thrived with designs from Krishna’s childhood stories, episodes from Ramayana and Mahabharata among others. Woven in silk thread with a flowery border with butis sprinkled all over, the main attraction in a Baluchari saree lies in the large pallu (end piece of a saree), which carries a central pattern bordered by smaller motifs. These are derived from miniatures, which have been simplified to fit into the weaving technique, and sometimes inspired by the motifs found in the temples. Since the nawabs also patronised, the designs included courtly scenes like kings on elephants and horseback, men smoking hukkas, and graceful dancing girls. European faces mingling with Indian in design patterns are seen in the 19th century.

There are a few saree shops in Bishnupur, which employs a few weavers in their own workshop, but there are looms in most of the households in Patrapada in Bishnupur.

It is worth experiencing the way weavers of Baluchari have inherited the traditional skill to move their hands impeccably while meticulously filling the designs signifying the perfect blend of the weaver, his loom and the design.

Also Read : Talk of the Tune: What is So Special about Ramooz’s Aalav?

Shri Biswanath Khan of Patrapada who has been weaving and training weavers since last five decades says “I had woven Jor Bangla temple in Baluchari saree around 35 years back, but as the demand is more of other contemporary designs, we weave accordingly”. Each new design takes a preparatory of a few months, as the weaver has to put the design in a graph paper, punch the design in cards, make a reel of punched cards in sequence ready for weaving. 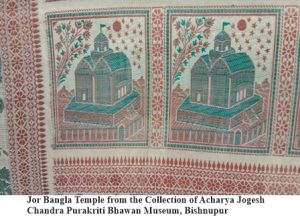 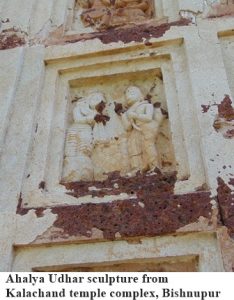 The famous episode of Ahalya Udharmentioned in Ramayana finds a depiction in a sculpture in Kalachand temple complex in Bishnupur. The same has been woven in Baluchari as well.

The process of production of Baluchari sarees are quite exhaustive starting from sericulture to yarns being made smooth and colourful by boiling them in hot water and soda. Finally, yarns are tightened to be woven into a saree with specific designs.

Most common Baluchari have threads in one or two colours to weave the entire pattern. Sometimes meenakari work is added to further highlight the pattern. When the pattern is woven with gold thread interspersed with silver thread it is called Swarnachari.

The high cost of weaving and gradual lack of patronage during the British period led to the decline of the craft. With the demise of master weaver Shri Dubraj Das, the last known weaver of Baluchari in early 1900s, the centuries-old tradition had ended. Fortunately, in the middle of 20th century the craft was revived with the combined efforts of Shri Subho Tagore and Smt Kamaladevi Chattopadhyay who worked with a talented weaver from Bishnupur Shri Akshay Kumar Das. The revival process included replication of original designs and introduction of Jacquard looms instead of Jala looms which reduced the duration of production process. Some of the revived designs are in the collection of Acharya Jogesh Chandra Purakriti Bhawan Museum, Bishnupur.

The tradition of Indian textiles has remained relevant since the past few centuries evolving with demand from patrons. Exhibitions have helped in a major way in promoting and raising awareness about the craft amongst general population. The first all-India arts and crafts exhibition held in the Qudsia Gardens in 1902 paved the path for similar such exhibitions.In 1957 the exhibition of Baluchari sarees, organised in Kolkata by Shri Subho Thakur encouraged the people to think about the need to revive the craft form. In February-March 2019 the exhibition titled “Baluchars: The Woven Narrative Skills of Bengal”, organised at National Museum in New Delhi in collaboration with the Weavers Studio Resource Centre, Kolkata, was an important step in promoting generalawareness of the rich textile tradition of Bengal.

Handwoven Baluchari sarees with authentic design motifs have become more of a collector’s item these days, while the demand has been substituted with simpler and easier patterns which is cost effective also. Whether preserving the traditional pattern or keeping pace with the contemporary demand, Baluchar has journeyed a long way through Murshidabad, Bishnupur and Benaras. Finally, after receiving the status of Geographical Indication (GI) implying that authentic Baluchari sarees could be found only in Bengal, they are here only to rise and shine.