The Shadowy World of the Poor: Memories of My Friends at the Rescue Mission

It is a short, but amazing read about how small lives that hardly matters, live beautiful lives in their own ways blessed by the hands of God.

Shirley Mandel Satterfield’s book The Shadowy World of the Poor: Memories of My Friends at the Rescue Mission narrates the invisible place in plain sight where the poorest of the poor from diverse backgrounds 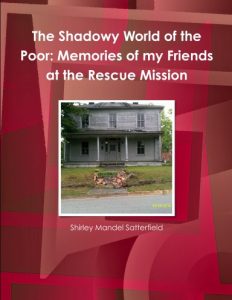 live. It is a memoir about the various colorful people Shirley met at a storefront church, where she served and worshiped while attending college. It will make readers laugh and cry, and also pray for lost souls understanding the plight of the poor in an inner-city neighborhood in the US.

Set in the backdrop of a rescue mission, the author portraits brief individual stories of her own friends, who serve and burden the people by living off tax payers’ money—the fast-food workers, the sick, the single moms, and even criminal elements—at the Mission, and it appears to have a ‘fictional’ touch. However, each of the ‘stories’ vividly show how people who are left to live their own low, but dignified lives, cope with their daily lives at the Mission ably aided and blessed by a few well-wishers of the local church.

As usual with most rescue homes, this place too was cramped and uncomfortable. It is so evident from the author’s own narration that “the fire marshal would have had a field day clearing out the place had the fire-department inspected the building”!

However, in spite of the physically uncomfortable accommodations at the Mission and the long sermons by Pastor Mark, all the inhabitants endured the discomfort for the same reason—seeking redemption. Despite the poor and substandard settings, the Rescue Mission is blessed by the presence of a god man Pastor Mark, who has kept many out of the jails and mental hospitals with “his care and his prayer”. Although a well-educated individual who dedicated his whole career to serve the poorest of the poor, he was quite poor himself. The author describes him as a ‘determined man’.

Also Read : Why We Should all be Feminists?

Shirley says that every church is blessed with a generous rich man, and the Mission church was no exception. And Matthew is the man who has been desperately supporting the Mission as his own noble duty. A low-income lawyer who has specialised in bankruptcy hearings for the people in the hood and criminal defense, was truly the people’s lawyer. Matthew dropped out of medical school to become an attorney, because he thought he could make more of a difference for the poor in the legal profession, but with a mere pittance of a fee. Another speciality of Matthew is that he defends his clients charged even with the most heinous of crimes (even once defended a child rape accused!), if the defendant could convince him of his innocence. Shirley says that it may be because of his devout Christian faith, and he was always praying for and serving others.

The book has several ‘characters’ with their own unique traits and taunts. The 80-year old Anna, fondly called Granny at the Mission, was among them. Anna was very poor, but in her own way she was also very rich, for she knew how to enjoy life! Priscilla is another, who has orthopaedic problems and has been physically disabled that she had to use a walker. A godly woman with great faith, she would use her faith to encourage others in the certainty that they would realise their hopes and dreams, when she herself was facing the insurmountable obstacles of a life behind a walker.  Priscilla may have been an aging, disabled woman, but one older gentleman who visited the church saw great beauty in her, and he called her his little saint. Pastor Mark rebuked them for kissing during the worship service at the Mission building. Unable to bear the brunt of the rebuke from Pastor Mark, they left the Church, but both got married subsequently.

Readers will encounter people like Paul who sings “This little light of mine, let it shine.” Although “Lord have mercy when he tried his hand at playing the piano; it was time to get out the earplugs”, Shirley says “Paul liked to donate money to the mission and encourage others to do so too. He reminded us that you can’t out give God and he often told us the story of when he gave the church ten dollars and God subsequently bent over the earth from heaven and “laid one hundred dollars at his feet on the sidewalk,” just for him because he gave.”

“A great prophet without a car”, Jeremiah, who fancied himself to be a special prophet and that his mission in life was to correct the errors of the other churches in the community, is another interesting character.

Shirley says what “amazed me about Jeremiah was that he would call God “Boss.” He would say things like, “What do you want me to say today, Boss?’ or “Boss told me to ride the bus to Wal Mart today, and I said, Yes Boss.”

While Shirley portraits a devout Christian and a generous soul “the Barefoot Prophet”—Deborah, who considered God’s whole earth to be sacred ground, she also describes lives of people who are “Sinners” like the prostitute Maggie. Maggie, who fell prey to the local drug dealers, had to sell herself for drug money. Readers will also find drug addicts and child molester, homeless, innocent mission kids, who were worshiping right alongside of all those troubled people as narrated by Shirley.

Shirley gives some personal reflections on the shadowy world of the poor. She says “poverty has a lot more to do with a mindset than it has to do with one’s income or what is on a person’s porch. It all depends on your values. A person who has fallen on hard times, but has middle class values isn’t suddenly going to leave junk cars parked in the driveway. A person is not suddenly going to devalue education or raise his children in an authoritarian style just because penury has creeped into his life. Poverty culture taking root in a person’s life is a slow process.”

Shirley concludes by noting that “there were a whole spectrum of colorful personalities from all walks of life at the mission—some good and some bad, but even with all their body art, gold toned jewellery and problems, they were all made in the image of God.” The Shadowy World of the Poor: Memories of My Friends at the Rescue Mission is a short, but amazing read about how small lives that hardly matters, live beautiful lives in their own ways blessed by the hands of God.