Threat of Islamic State: Have We Drawn the Drapes Too Early?

Peace can become the 'normal' not by containing and managing the conflicts, but by the elimination of root causes of conflict and transformation of relationships in themselves.

The ISIS ( Islamic State of Iraq and Syria), the jihadist group which aims to establish an Islamic State, called caliphate, across Iraq, Syria and beyond, at its apogee in 2014 had 20,000 to 32,000 militants who amassed control over territory the size of the UK. It was made possible by making £600,000 a day through the internal sale of oil and gas, taxation, extortion and plundering. 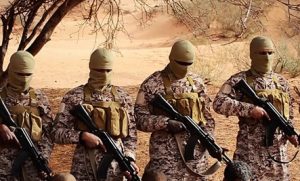 They threw the world peace and human rights agenda into disarray through their rigid implementation of the Sharia law, demolition of religious sites and antiquities. The ISIS practiced brutal slavery, genocide of minorities like Yazidis, forced conversions, crucifixations, mass executions and beheadings – all caught on camera and used by its propaganda machinery, to brainwash people into joining their cause. The world had heaved a sigh of relief when the SDF ( Syrian Democratic Forces) declared  total elimination of the caliphate and complete territorial defeat of ISIS on 23 March 2019 and Donald Trump confirmed  the death of Abu Bakr Al-Baghdadi, ISIS leader, shortly after, on 27 October 2019. But have we succeeded in completely eliminating the threat of ISIS? Turns out we haven’t. ISIS continues holding up, perhaps more insidious than ever.

The Rise and Fall of IS ‘Caliphate’

The US, arch nemesis of ISIS, quite ironically played a very important role in its formation. ISIS traces its origins to Al Qaeda in Iraq ( AQI) formed by late Abu Musab al-Zarqawi, who pledged  allegiance to Osama Bin Laden, both the products of Mujahideen which was funded by the US to resist Soviet troops in Afghanistan during the 1980s.AQI, following the chaos that ensued post US invasion of Iraq in 2003 that removed Saddam Hussein from power, reconstituted into ISI (Islamic State of Iraq). The invasion without any agenda about rebuilding Iraq resulted in crippling Iraqi military forces while empowering the Sunni extremists. The US effectively abandoned its nation building efforts after 2009 and withdrew its combat forces at the end of 2011, creating a power vacuum, which along with the ammunition provided to the extremists by Syrian Civil War, created favourable conditions for the formation of ISIL (Islamic State in Iraq and the Levant) in April 2013, under the leadership of Baghdadi, who announced the merger of his forces in Iraq and Syria and began rapidly taking control of territories, massacring adversaries and minorities and establishing the caliphate. Baghdadi himself was a US detainee at Camp Bucca, the American prison often cited as the birthplace of ISIS, where he courted radicals and built reputation as religious leader, talents not taken notice of when he was judged as a low risk prisoner and released in 2004.

The dehumanising actions, mass human rights violations and executions by IS were widely condemned and global coalition was formed to counter IS. The US-led coalitions conducted airstrikes and ground operations while US provided military aid to Kurdish forces and Iraqi security forces.

In the years that followed, the IS began to lose ground and on 9 December 2017, Iraq declared victory in the fight against ISIS and stated that the war in Iraq was over.

On 23 March 2019, ISIS was completely defeated territorially in Syria after losing the Battle of Baghuz Fawqani and by October, Baghdadi was announced to be dead.

Why is ISIS Still a Threat?

The Islamic State has lost all its territory, its fighters have been killed or imprisoned and its former leader is dead. However, it is a fact to reckon with that ISIS is gone only in strict geographical terms. With the loss of territory, ISIS lost access to resources and the physical space to fight and bring to life their vision of caliphate that acted as a tool to recruit thousands of foreign fighters. Their propaganda outfit diminished with the destruction of media centres like Raqqa which hosted the media headquarters, flow of foreign fighters began to taper off and there was a visible decline in the deaths caused by their attacks. However, what makes them still a formidable threat is accurately put to words by Charlie Winter, ISIS analyst, “The caliphate idea will exist long beyond its proto-state”. You can eliminate a physical entity, but not an idea. ISIS is rightly likened to a ‘three headed monster– core ISIS in Iraq and Syria, eight ISIS provinces and digital ISIS’. Today, ISIS propaganda is still out there, calling for its affiliates around the world to launch suicide attacks in their name which shows the shift of IS from a ‘caliphate that controlled territory to a global network with cells on six inhibited continents,’ stated Nathan Sales, U.S. Coordinator for Counterterrorism Ambassador. Sporadic attacks claimed by IS continue to take place  with some recent ones being ISIS-linked gunmen opening fire on a military convoy in the remote province of Sulu, Philippines that killed  11 troops ,  “soldiers of the caliphate” set several boats ablaze in  Maldives as a warning to the Indian Ocean archipelago’s “apostate” government, massacre of 52 villagers in the oil-rich Cabo Delgado region in Mozambique claimed by a local affiliate of the transnational jihadist group; all in the month of April 2020, reminding that the threat of IS is far from over. The peril hit close to home when a UN report on terrorism warned recently that there are “significant numbers” of IS terrorists in Kerala and Karnataka, noting that the al-Qaeda in the Indian subcontinent (AQIS) terror group is planning attacks in the region.

Also Read : Trump’s plans for US troops to be tweeted out of Syria are directionless

Is IS Resurgence Possible?

While IS resurrecting to what it was at the beginning of 2014 seems like a pipe dream, it must be acknowledged that the conditions that led way to the rise of IS still prevails. Iraq remains unstable and the ascension of Shiite militias is once again leading to grievances among the Sunnis. The policies executed by the US in Middle East have also set the alarm bells ringing on several occasions. With the killing of Qasem Soleimani, there was a pause in cooperation with Iraqi units while Trump’s decision to move US forces in North Eastern Syria out of the way of a Turkish attack against American Kurdish allies led to the Kurdish  forces scrambling to fight the invasion, leaving the prison camps which kept the ISIS fighters unmanned who attempted various prison breaks, like in the Ghweran prison at Hasakah city.

These understaffed and over-crowded prison camps have been described as ‘ ticking time bombs’ by the SDF forces and the threat of prison breaks have mounted with the COVID-19 factoring into the equation.

With the virus infection as an added incentive and the world busy fighting the pandemic, the possibility of IS staging another systematic prison break campaign similar to Breaking the Walls is not too farfetched. There are also concerns of jihadist groups like IS capitalizing on the pandemic and the weakened law and security enforcement to stage a broader resurgence as shown by the IS attacks in Iraq, Maldives and Philippines.

The harrowing prospect of resurgence of IS can be thwarted only if the West get over their fatigue in Middle East and address the power vacuum in Iraq and Syria. Instead of toppling governments and installing new ones, there is a need to  work with local actors, secure  grievance redressal mechanism to vent out the resentment and  strengthen vulnerable states and societies so that they can  defend themselves from violent extremism. Prosecution of ISIS terrorists must not be delayed further. With repatriations on hold, the UN and other international bodies must step up medical and humanitarian aid. It must be ensured that children at the camps have access to re-education facilities and psychological assistance. A wasteland cannot be labelled peace. Peace can become the ‘normal’ not by containing and managing the conflicts, but by the elimination of root causes of conflict and transformation of relationships in themselves.