Trajectory of internal migration in India and SDG 8

Even NITI Aayog in its Baseline Report 2018 which shows how SDGs will be measured in India does not lay emphasis on the aspect of intra and inter-state movement of workers, to measure the success of SDG 8 in India. 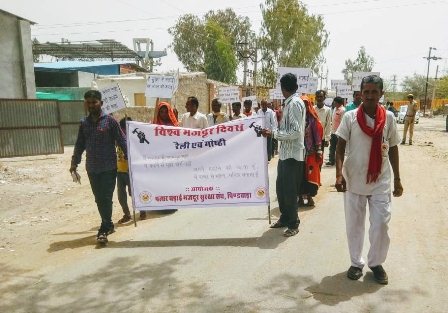 The Economic Survey 2017 estimates that the magnitude of inter-state migration in India was close to nine million annually between 2011 and 2016, while Census pegs the total number of internal migrants in the country (accounting for inter-state and intra-state movement) at a staggering 139 million. One other significant aspect is that number of internal migration in India is greater in magnitude than migration across borders.

Despite all these factors, focus of the policymakers is diverted from this arena of problems. High rate of growth is redundant if such a large chunk of the population is marginalised from the policymaking discourse.

A recent report released by Centre for Migration and Inclusive Development (CMID) analysed the dynamics of labour migration to Kerala. It emphasised that to achieve SDGs, Kerala has to promote migrant-inclusive development.

It noted, “Labour migration is more a requirement of the state than that of the migrant workers themselves, and it is fundamental to create awareness about this among the key stakeholders.”

To study the pivotal role of migrant workers and their condition, this report while conducting a qualitative inquiry during 2016-2017 in the state of Kerala, put forth a credible case study.

“Kerala is soon to set up a Department of Migrant Affairs in place of its existing department, Non-Residents Keralites Affairs (NORKA). Though the response of the state towards internal migration has been positive, the initiatives have not yet been adequate.”

“Decent work is a locomotive for sustainable development. Putting decent work at the heart of economic policy-making and development plans not only generates jobs but also more robust, inclusive and poverty-reducing growth. It is a virtuous circle that is as good for the economy as it is for people, and one that drives sustainable development,” remarked Tomoko Nishimoto, ILO Regional Director for Asia and the Pacific, on the launch of the India Decent Work Country Programme (DWCP) 2018-2022, which is the five year strategy of ILO constituents to promote decent work in India.

The Goal of the month of April 2019 was SDG 8, ‘Promoting sustainable economic growth, employment and decent work for all’.

In the case of SDG 8, anxiety around questions of employment and creation of right kind of jobs deflect the focus from one of the major aspect of the goal which is the issue of internal migration.

Booming rate of growth is an inadequate testimony to determine the effectiveness of SDG 8. Individual evaluation of each dimension of the goal is a credible way to some extent to prevent numbers from being devoid of the actual ground level situation. In other words, high rate of economic growth should be complemented by elements such as high rate of employment, safe and secure environment for wage labourers, increased labour force participation rate and other related indicators.

Growing urbanisation cannot be addressed without recognising the relevance of the issue of intra or inter-state movement of workers. Inter and intra state movement of workers in India call for focusing on areas associated with labour reforms, ensuring basic amenities at workplace to migrant workers such as safe and secure working environment and creating a labour administration system commensurate with their nature and needs.

Due to unsatisfactory working conditions and the huge number of migrant workers, it calls for strong and effective policies.

“Challenges encountered by migrant workers as a consequence of their unawareness about their rights are abundant. It ranges from issues of trafficking, exploitation by labour agents, lack of access to public services in the destination state, issues of identity documents  etc.”

Internal migration has been a less talked about issue even in the DWCP, 2013-2018. ILO has precluded from including this theme in its areas of critical importance and has neglected the role of internal migration in achieving decent work conditions.

Even NITI Aayog in its Baseline Report 2018 which shows how SDGs will be measured in India does not lay emphasis on the aspect of intra and inter-state movement of workers, to measure the success of SDG 8 in India. Under SDG 8, its concern is limited to issues such as ATM coverage, banks’ access, government initiatives, but there is complete silence on the trajectory of internal migration.

But the issue of migrant labour is as important as any other issue for the achievement of the goal of decent work. Initiative by Aajeevika Bureau which is a civil society organisation in Udaipur to address the issue of migrant workers by focusing on their identity crisis is noteworthy. The official data of  Aajeevika Bureau states that over a span of seven years, the Bureau has been able to register around 70, 000 migrants. Aajeevika has partnered with the State Bank of India to provide assistance to migrant workers. However, a state-driven response is needed to address this issue. 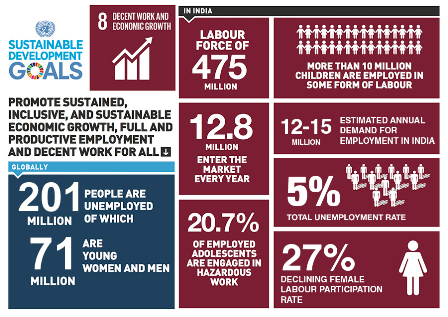 There is an urgent need to focus on labour reforms to facilitate the labour administration system in India. For instance, establishing a single legal authority would be a step forward in this direction.

The Working Group constituted by the Ministry of Housing and Urban Poverty Alleviation to study the nature of impact on housing, infrastructure and livelihoods in July 2015 was a welcome step in this direction. The Group recommended that states should erase the domicile requirements with regard to employment and it also recommended revamping the existing legislative framework so as to ensure equality, dignity and providing minimum security to the citizens by creating migrant-friendly provisions. These minor interventions should be more frequent to mitigate the matter and to facilitate an inclusive policy environment. One constituent of SDG 8 is clearly promoting a safe working environment for migrant workers, the relevance of it differs from country to country but clearly, for India, there is no reason for the government and policymakers to sideline or abandon this matter.

UNESCO 2013 publication Internal Migration Initiative In India suggested that policies and programmes facilitating integration of migrants at the destination remain weak at best or non existent and suggested the inclusion and integration of migrants in the development process. The UNESCO report exposed the myths about the internal migrant workers and argued that instead of “stealing jobs”, the migrants do the 3-D jobs (Dirty, Dangerous and Degrading) which locals are reluctant to do. The report says, “Far from being a drain and burden on economies of the destination, migrants are in fact providing a subsidy.”

Migration is crucial to development as it gives an opportunity to the disadvantaged section to gather the opportunities the market offers which in turn promotes their socio-economic conditions and enhances their access to services like healthcare and education.

“Policymakers have to take steps to ensure fair treatment of migrant workers in the destination areas and to make sure that their access to public services is not precluded by the changed location of their work.”

Creating provisions related to identity documents for migrants can enable them to procure welfare schemes and bank accounts at the worksite or creating helpline numbers for the migrant workers can help them in need. Therefore, an inter-state coordination mechanism have to be established to promote social security and ensure well-being of migrant workers.

Migration being an adaptive mechanism in times of occurrence of a natural disaster, its role in poverty reduction should not go unacknowledged. It needs to be paid its due share of attention.

The writer, a public policy researcher, is a Masters Student at School of Law, Governance and Citzenship, Ambedkar University Delhi. She can be reached on twitter @savi1924

What could be the public agenda for the Modi 2.0 government?

Explaining the Modi wave in the 2019 Lok Sabha Elections