Three important initiatives on women’s safety conceptualised by the Ministry of Women and Child Development have been launched. 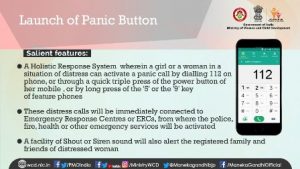 To promote safety of women in their living spaces, working spaces and the public spaces, the Ministry of Women and Child Development has conceptualised several initiatives. Three of these initiatives were launched jointly by the Home Minister, Rajnath Singh and WCD Minister, Maneka Sanjay Gandhi in New Delhi today.

While thanking the Minister of Home Affairs for setting up a separate women safety division in the Home Ministry, Gandhi has stated that the two ministries are “collaborating intensively” to ensure that women are safe in the country.

She also apprised that the One Stop Centre Scheme, funded through the Nirbhaya Fund, is being implemented by the WCD Ministry and 314 centres have started working across the country.

“As per the government figures, these centres have helped 2.2 lakh women so far. Similarly, Women Helpline has been made operational in 31 states/Union Territories  and assistance has been provided to over 25 lakh women.”

The idea of having a panic button on mobile phones was conceived way back in 2015 and after a series of deliberations with the Ministry of Telecom, mobile phone manufacturers and mobile telephony service providers, the Ministry of Telecom, mandated a physical panic button on all mobile phones in the country. It was also noted that such a panic button must be backed by an emergency response mechanism through the local police when panic button message would alert the specified family members etc. of a woman in distress situation. This system was then conceptualised in collaboration with the Ministry of Home Affairs (MHA) and state governments were asked to put in place a dedicated Emergency Response Centre through which the entire system will be operated. The emergency response system can be triggered by pressing the power button (dedicated panic button) three times quickly on smart phones or dialing 112 from any phone. There is also ‘112 India App’ mobile application which is available for free downloading. In case of feature phones, long press of the touch key 5 or 9 is mandated.

“The emergency message coming out of these would trigger a response from the emergency response centre through a team of trained personnel who can handle emergency requests of various kinds and get the necessary relief services launched.”

For women and children, 112 India App provides a special SHOUT feature which alerts registered volunteers in the vicinity of victim for immediate assistance.

The emergency response system was soft launched in Himachal Pradesh and Nagaland recently and was followed by launch in 14 more states. A total amount of Rs.321.69 crores has been provided for this initiative through the Nirbhaya Fund.

In order to provide safety for women in public spaces, the Government has identified eight cities for implementation of Safe City project. The eight major cities which have been chosen are Ahmedabad, Bengaluru, Chennai, Delhi, Hyderabad, Kolkata, Lucknow and Mumbai. Detailed projects for this have been prepared jointly by the municipal bodies and the local police authorities. The projects include creation on ground assets and resources and mindset for safety of women.

Some of the key features of the safe city project include identification of sensitive hot spots in each city; installation of CCTV surveillance covering the entire hot spot; automated number plate reading machines to be deployed in extremely sensitive areas; intensive patrolling in vulnerable areas beyond the identified hot spots; improving street lighting and public toilet facilities for women and setting up women help desks in police stations, augmentation of women support centres etc.

“These measures would be coordinated through an Integrated Smart Control Room in the city. In order to facilitate States to monitor and manage the Safe City projects and avoid duplication on ground, an online Safe City Implementation Monitoring (SCIM) portal has been developed by MHA.”

SCIM will facilitate online tracking of deployment of assets and infrastructure created under the Safe City projects. It also facilitates an evidence-based online monitoring system while creating a digital repository of assets, infrastructure and social outreach programmes, as well as best practices achieved in each city.

Timely testing of DNA samples from the crime scene is the quickest process of obtaining forensic evidence in cases of sexual assault on women. But since there are often reported complaints of delay in cases of sexual assault investigations, dedicated DNA analysis facilities have been sanctioned for the forensic science laboratories located at Chennai, Madurai, Agra, Lucknow, Mumbai and Kolkata.

The equipments to be provided under this initiative include refrigerated facility for samples, automated DNA extractor and sequencer, centrifuges, genetic analysers etc. A sum of Rs.78.86 crores has been sanctioned for this initiative through the Nirbhaya Fund. Expert technicians are also being recruited and trained for the forensic analysis.

The Minister has stated that besides these initiatives, fast track special courts for cases of sexual assaults are also being established in collaboration with Ministry of Law for which Rs.767 crores has been sanctioned through the Nirbhaya Fund. Projects for Central Victim Compensation Fund for Rs.200 crores and Cyber Crime Prevention Against Women and Children for Rs.224 crores have also been appraised and approved under the Nirbhaya Fund.

No law to deal with refugees in India disturbs me: Ubais Sainulabdeen

Chennai Metro: How soon it would become a white elephant?