The results of a new report indicate that large number of people repose faith in the district collector, sarpanch or municipal corporator to get important work done indicating the growing importance of local governments in India. 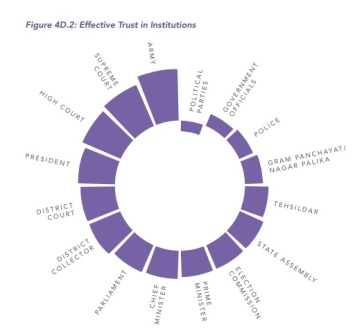 The Indian National Army is the most trusted institution in India with effective trust (per cent of citizens who trust minus those who distrust) of 80 per cent. It is closely followed by the judiciary which enjoys over 65 per cent trust while political parties are least trusted with 55 per cent effective distrust, indicates the key findings of a new report.

However, the Prime Minister enjoys more net trust at 42 per cent than chief ministers, government officials and the police. In retrospect, when disaggregated by religion, this trend only holds true among Hindus and Christians.

Sanjay Kumar, Director of The Centre for the Study of Developing Societies (CSDS) said, “It is a unique study conducted to systematically tap people’s perceptions and attitudes on various social and political issues between elections.”

Setting out to understand “to what extent do citizens trust the legislature, executive, judiciary, bureaucracy, police and army?”, the report evaluates political trust as a conceptual device that serves as a ‘‘middle-range indicator of support between the specific political actors in charge of every institution and the overarching principles of democracy in which specific institutions are embedded in a given polity’’

“Trust in both macro-level institutions as well as public offices and actors at the micro or individual level have been documented as part of the report brought out by Lokniti-CSDS and Azim Premji University (APU) covering a sample size of 24,000 respondents across the 12 states.”

For instance, the report indicates that large number of people repose faith in the district collector, sarpanch or municipal corporator to get important work done indicating the growing importance of local governments in India.

Among those surveyed in rural regions, 32 per cent would approach a sarpanch, and 15 per cent said they would approach a local political leader to get important work done. Nineteen per cent of urban residents also noted that they would approach the ward councillor followed by government officials (14 per cent) and the MLA (14 per cent). More citizens approach the sarpanch or councillor to get work done over elected representatives to State assemblies (MLA) and the Parliament (MP). Yet, 50 per cent preferred to approach a leader from the same caste or religion as themselves.

“There are differences across states on this preference, but it suggests social and cultural identities are entwined in how a citizen experiences the state and governance,” Prof. Siddharth Swaminathan, APU mentioned to Delhi Post.

At the launch of the report, social activist Yogendra Yadav noted that “capturing attitudes and public opinion between elections is critical for Indian democracy”. “These studies are critical and vital to gauge public opinion to predict elections and not just seats,” he opined.

One of the significant findings of the report point towards the “high levels of trust” that the District Collector continues to experience faring better than the ‘tehsildar’ and the President of the country.

“The Election Commission receives higher net trust (42 per cent) than the Gram Sabha (29 per cent) which has seen a marked erosion of trust since the first report (52 per cent) and the second (56 per cent).”

It highlights that while the variation between the Election Commission and Gram Sabha might be explained by the fact that elected institutions do not necessarily enjoy high levels of trust, the marked decline of trust in the Gram Sabha, compared to other institutions, is something to be noted.

The report observed that the “confidence people place on their governments come with the payment of taxes, acceptance of legislative and judicial decisions, compliance with social service programmes, and support of military objectives among others, all factors that reaffirm public faith in the state”. Besides citizens’ trust in political institutions, ties across social groups, ease of public service access, citizen-state interfaces and governance, gender roles and relationships, nationalism and political identity, freedom of expression, and populism have also been analysed.