For conservation of River Yamuna, 11 projects have been taken up for sewerage infrastructure as part of Namami Gange Programme. 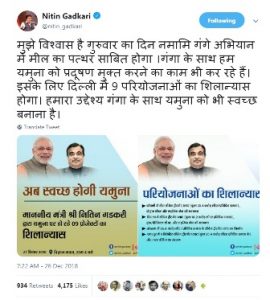 A total of 11 projects have been taken up under Namami Gange Programme by National Mission for Clean Ganga (NMCG) to conserve the River Yamuna in Delhi. Most of the projects are for the sewerage infrastructure and are at various stages of implementation. These projects under Yamuna Action Plan (YAP) III are located in three drainage zones namely Kondli, Rithala and Okhla in Delhi.

Building on the success and lessons learnt from YAP-I and II, Government of India launched YAP-III with JICA assistance in Delhi at an estimated cost of Rs. 1,656 crore which has got integrated as a component of Namami Gange Mission. Delhi Jal Board is the executing agency for these projects.

Also read: Uttar Pradesh’s Ghagra River is soon to be a National Waterway

Rising population and growth of National Capital Region (NCR) have significantly contributed to rise in the flow of untreated sewage directly into the River Yamuna, one of the sacred rivers of India and largest tributary of Ganga. Delhi, the National Capital, is a mega metropolitan with a population of around two crore has an area of 1,484 square kilometer.

“The total length of the Yamuna up to its point of confluence with the Ganga at Prayagraj is 1,370 km, its catchment areas is spread over 3.67 lakh sq kms.”

The sewerage projects are being taken up in four packages of Kondli (K1, K2, K3, K4), three packages of Rithala (R1a, R1b, R2) and Okhla zone (O). Of these, seven projects are at various stages of implementation. One project of Okhla zone is under tendering process.

In addition of these, two project at a total cost of Rs. 580 crore have been sanctioned – Waste Water Treatment Plant of 31.8 crore liters per day at coronation Pillar costing Rs. 515.07 crore and nine of decentralised STPs (2.25 crore liters per day) at Chattarpur of Rs. 65.24 crore.

Snooping Sarkar: Where the controversy stands